103-Inch Plasmas Cause Installation Headaches For Dealers and AV Installers

103-Inch Plasmas Cause Installation Headaches For Dealers and AV Installers

The 103-inch plasma HDTV is a niche product, to be sure. For those who want it and can actually afford it, the next step is to figure out how to install it. That's no easy feat, as the installer must overcome logistical, structural, and electrical challenges. 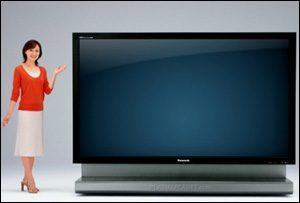 "It costs a lot of money to be cool" says Bob Vega the former bassist from Sly and the Family Stone and when it comes to the world's largest plasma HDTVs - truer words may never have been muttered. Not only for the steep price of today's biggest flat HDTVs but also for the trickery needed for the installations.

The 100 plus inch plasma market is a unique video niche catering to dealers looking to make a true technological statement in their showrooms as well as for clients who have the room, budget and ego to also want to make a similar statement. Videophiles when asked about these giant plasmas, quickly suggest that the cost of a superior front video projector and an even larger screen can cost less than one tenth of the price however for those that need "the biggest plasma" there is no replacing the whopping 103 inch plasma.

Two companies are selling and marketing these physically monstrous sets: Panasonic and Runco. Prices range from about $75,000 to Runco at nearing $100,000. Each set requires a site survey as you can't just hang this much "glass" on traditional drywall and think its going to stick. In fact, you can't even place it on a stand without someone checking things out as the liability of such an install is just too much for any manufacturer to take on. Beyond the structural issues of the install - each system needs its own dedicated AC line to meet the electrical needs of the set. Additionally, in many installs there is the need for a crane to get the set in place because the weight of the set is simply too much to sagely handle.

No matter the value issues compared to front projection systems, people and dealers a like want the largest plasma and are willing to fight through the logistics of making it work to its peak performance even if the installation costs the client more than a projector capable of making a picture nearly twice as wide on a video screen. Many of the world's most wealthy people want their big plasmas.