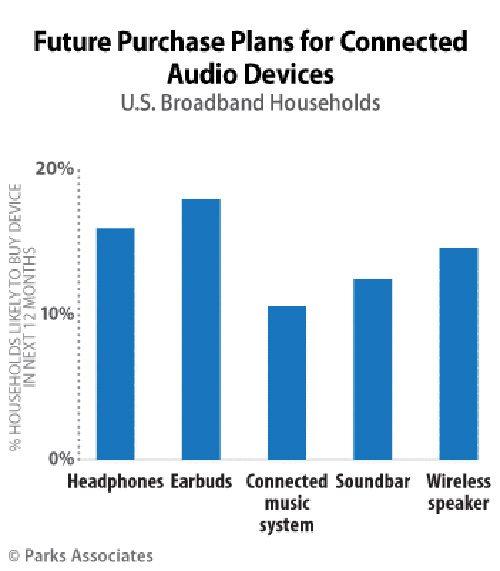 A recent Parks Research study found that, of U.S. broadband households, 18 percent plan to buy earbuds over the next 12 months, 16 percent plan to buy headphones, and 15 percent plan to buy wireless speakers. "The smartphone has evolved into the primary interface for the connected home," says Parks Research, and it is driving interest in the wireless and "connected audio" categories. The company's 360 View: Mobility and App Economy report states that more than one third of U.S. broadband households use their smartphones to stream music to a speaker or stereo system. Not surprisingly, this practice is most popular amongst consumers ages 25 through 34.

"The smartphone has evolved into the primary interface for the connected home, and it is helping to create new app use cases for services such as Pandora and Spotify, which in turn drive interest in new connected audio devices," said Brad Russell, Research Analyst, Parks Associates. "Nearly 50 percent of U.S. broadband households have bought headphones as a separate purchase, and the growth of premium brands, including Beats, Bose, Sony, and Sennheiser, shows consumers are interested in high-quality audio devices."

Parks Associates' industry report Digital Audio for the Connected Consumer notes that 22 percent of U.S. broadband households currently own wireless speakers, reflective of consumer desire for the wireless mobile experience in the home. The firm's 360 View: Mobility and App Economy reports that more than one-third of U.S. broadband households use their smartphones to stream music to a speaker or stereo system, with consumers ages 25 through 34 as the largest age group who stream music from smartphones to speakers.

"At the beginning of 2015, nearly 60 percent of U.S. broadband households that own speakers had a wireless speaker, and 42 percent of households that own headphones had a wireless pair of headphones," Russell said. "We are seeing a willingness among consumers to spend on connected audio equipment in order to enhance the audio experience, add a wireless component to the audio setup in the home, and adopt a brand with the reputation for fashionable accessories and high-quality sound."