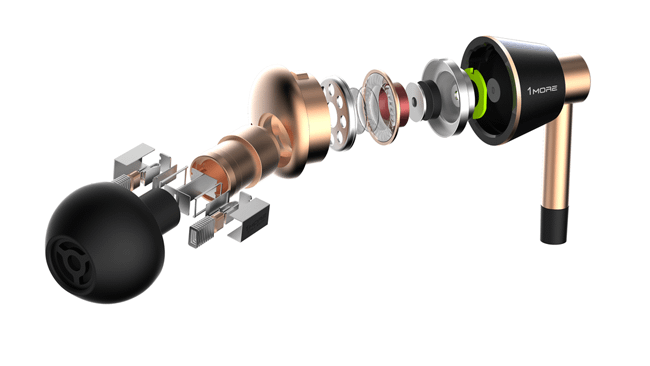 Steven Stone auditions the new E1001 earphones from a relatively new player in the headphone market, 1MORE USA. The design, build, and performance of these triple-driver earphones go beyond expectation, given their $99.99 price tag.

Every audio firm makes a top-of-the-line product that is referred to as its "flagship" product, but rarely is that product priced under $100. The new consumer electronics company 1MORE has done exactly that. With six products in the company's lineup, starting with the 1M301 single-driver in-ear monitor for $29.99 and including full-sized over-the-ear headphones for $79.99, the new $99.99 E1001 Triple Driver earphone is 1MORE's premium offering.

1MORE is an international company with offices in the U.S. and China. Gary Hsieh founded the Chinese branch of 1MORE in 2013, while the U.S. division, which is headed up by Dave Russell and Tim Burton, began operations in 2014. According to 1MORE sales literature, "1MORE's focus is on making reference-quality audio products that are available to everyone. The Triple Drivers are the latest and greatest effort towards this goal." Let's find out how close to reference a $100 bill will get us.

Product Description
The first thing you will notice about the 1MORE E1001 is its packaging. Not only is it slick, but it also borders on sumptuous with its stylish graphics and a hard black-leather storage case that is approximately the size of a pack of cigarettes. This case is equal in quality to many I've seen packaged with earphones that cost ten times the E1001's price. This is not hyperbole: compare the E1001's case with the case that comes with the $999.99 Astell & Kern AKT8E, and you will find, as I did, that the 1MORE case is its doppelganger when it comes to build quality, even down to the magnetic latch.

On to the earphones themselves: the 99-dB efficient, 32-ohm E1001 has three drivers in each enclosure in a patented structural layout. The treble and midrange drivers are balanced armature designs, while the lower-midrange and bass driver is a dynamic type. "Tuned" by Grammy-award-winning engineer Luca Bignardi, the E1001 claims treble response that extends up to 40 kHz. The three drivers are housed in a forged aluminum alloy body that puts the two balanced armature assemblies near the front of the unit, while the dynamic driver resides in the larger chamber in the main section of the earphone. The dynamic driver itself has a triple-layer diaphragm construction with two outer layers of PET, a resilient polymer over "an aerospace metal."

The two balanced armature drivers have a patented design that features a silicon cover for added durability and an "zero weld" balanced armature unit that replaces the two welding points found on most balanced armatures with a more stable one-piece driving rod structure. Balanced armatures are a far lower-mass and "faster" technology than dynamic drivers, but they are also less efficient and more prone to damage from physical shocks and drops. 1MORE tests its drivers using the Keystroke Test, which runs 400,000 times, as well as a "wire flexing test" that is performed 15,000 times on random production samples.

Although the E1001's cable is not removable or replaceable, it was engineered to be strong. Its interior of enameled copper is wrapped around a Kevlar fiber to maximize tensile strength, while the cable's surface has a layer of TPE and a final braided layer of nylon to reduce tangling. According to 1MORE, the cables are uniquely spaced to eliminate the "stethoscope effect." Even the accessory dual-prong airplane adapter (which lets you enjoy the many fine offerings available from your airline's in-flight entertainment channels) is high-grade aluminum.

The E1001 comes with six sets of silicone ear tips in different sizes, as well as three sets of memory foam tips in three sizes. The E1001 also comes with a nice shirt clip to hold the cable in place.

Ergonomic Impressions
I've written before about the importance of the fit in achieving optimum performance from any set of in-ear monitors. With nine different fit options, 1MORE tries to successfully cover all ear-canal shapes and fit preferences. Unlike some in-ear monitors, such as the Etymotic 4P, that have very narrow-diameter barrels that make it possible for some tips to sit deeply within your ear canal, the E1001 front barrels are sufficiently large that they can never sit very deeply within your ear canals. Instead they rely on a good seal along the outer regions of your ear-canal opening. I tried all the options and ended up using the largest of the memory foam tips. This fit was good but not quite as comfortable or firmly seated as the fit I can get from the Astell & Kern AKT8E in-ear monitors, using their largest Comfit foam ear tips. If only a larger-sized foam tip was supplied with the E1001, they could've fit almost as well as the Astell & Kerns AKT8E monitors.

Isolation from outside noise with the E1001 is very dependent on the fit. With the proper fit, the E1001 isolates almost as completely as the Etymotic ER-4, but most of the time I found some small amount of leakage was present due to changes in the seal on the foam tips. When I used these IEMs in a noisy environment like Planet Fitness, I noticed some sound from the ceiling speakers throughout the club; however, except for some minor adjustments, the E1001 stayed in place and shielded me from Planet Fitness' corporate playlists.

The E1001 stays in place best when its cables are run around and over your ears and then either allowed to fall behind your back or in front of your chest. That way, the small, inevitable tugs on the cable will not dislodge the monitors from your ears. The cable is not as microphonic as many I've used, but if the first couple of inches rub against anything, you will hear it. If you want to use the built-in controls for both Android and Apple iOS, the headphone cables must be routed in front; otherwise, the microphone will rest somewhere on the back of your neck. Since the cable is not replaceable, its 1.2-meter length could be either too long (when attached to a portable player that's on your hip or arm) or too short (when you want to use a headphone amplifier tucked under your desk).

I used a variety of devices with the 1MORE E1001 during the review, including the Aurender W1000 Flow, NuPrime DAC-10H, Oppo HA-1, Sony NW-ZX2, Astell & Kern AK Jr, Astell & Kern AK240, Calyx M, and Sony PHA-2. In every case, there was more gain in reserve than in use at my own personal maximum volume level. The problem with sensitive in-ears like the E1001 is noise and hiss due to their high sensitivity. With all the portable players, I had no issues with noise or hiss, but some of the desktop earphone amplifiers (designed to handle hard-to-drive headphones) could be problematic if they lack adjustable gain settings.

Sonic Impressions
The E1001 in-ear monitors are definitely designed to handle all types of modern music. Unlike many in-ears that have what is often referred to as a "happy face frequency curve" that highlights the tizz and boom of music, the E1001 takes a more even-handed approach that keeps all frequencies in balance with one another.

However, just because the E1001 attempts to be neutral and balanced doesn't mean it doesn't have some serious bass extension. On one of my current modern pop guilty pleasures, the new Molly Moore release Shadow of the Sun, there's a song called "Don't Believe It" that has plenty of EDM low bass coupled with the usual electric bass lines. The E1001 provides plenty of drive and bass push without giving you the feeling of having your ears boxed by the added bass pressure, thanks to a small hole in the E1001's housing that relieves excess bass pressure.

Even on a well-recorded acoustic bass track, such as the fine new release from Roswell Rudd & Heather Masse called August Love Song, the E1001 presents the proper harmonics and feeling of weight in a way that makes the acoustic bass sound eerily realistic.

Moving up to the midrange, the E1001 delivers more resolution and low-level detail than I'm used to hearing from an earphone in its price range. My previous $100 go-to in-ear monitor was the Shure SE215. In comparison with the E1001, the SE215 has a much darker overall sonic character without the inner details, faster attack, and soundstage differentiation of the E1001.

Upper frequencies through the E1001 have a natural sweetness without sounding hooded or dark. All the spit and sparkle of Roswell Rudds' trombone on August Love Song was preserved without sounding forced or harsh.

Like most in-ear monitors, the E1001's soundstage and imaging happens within the space between your two ears. But within this space, the E1001 does an excellent job of localization, differentiating and placing each sound source in its own precise spot in your between-the-ears soundstage. The E1001 also successfully preserve depth cues: with my own live symphony orchestra recordings, I could still hear that the brass section was well behind the first violins.

Near the end of the review, I connected the E1001 in-ears to an SPL Phonitor II professional monitoring amplifier to see how well they would "scale up" when fed unfettered power. I was rewarded with a level of dynamic slam, especially in the mid and low bass, that rivaled any in-ear I've used. The soundstage was also huge, as large as what I usually get from full-sized over-ear headphones. Save for a slight amount of low-level hiss, this was a very synergistic sonic combination.

High Points
• The E1001 has near-reference-quality sound.
• Bass extension is suitable for all modern music genres.
• The E1001's harmonic balance is neutral and well balanced.

Low Points
The E1001 cable is not replaceable.
• Fit could be improved with one larger foam tip option.
• The permanently attached cable could be too short or too long for some uses.

Competition and Comparison
The Shure SE215 has long been my go-to $99 anywhere in-ears. My pair has put in six months of continuous gym-duty torture testing and is still on its original cable. The Shure SE215 may not sound as detailed and open, or have quite the low-bass definition of the 1MORE E1001, but it does have a removable, replaceable, cable, which is a point in its favor. And while the E1001 comes with nine fit options, there are even more options available for the SE215 when you include all the third-party tips from Comply and others. If you have unusual fit requirements or plan on dishing out hard use, the SE215 may be a better choice.

The Brainwavz S5 has the same price as the 1MORE E1001 and a similar level of quality. The S5's cable is also not removable, but it does have a 24-month warranty. If you plan to use your in-ears with a smartphone (Android or iOS), the E1001 would be a better choice because it has controls on its cable, while the S5 does not. Fit-wise, either monitor has the potential for a good fit for most users.

Conclusion
The 1MORE E1001 triple-driver in-ear monitors can perform, when optimally fitted, on a level that wouldn't be out of place in a $1,000 in-ear monitor. Only its lack of a removable, replaceable cable prevents me from crowning it as my new price-point leader when it comes to in-ear monitors.