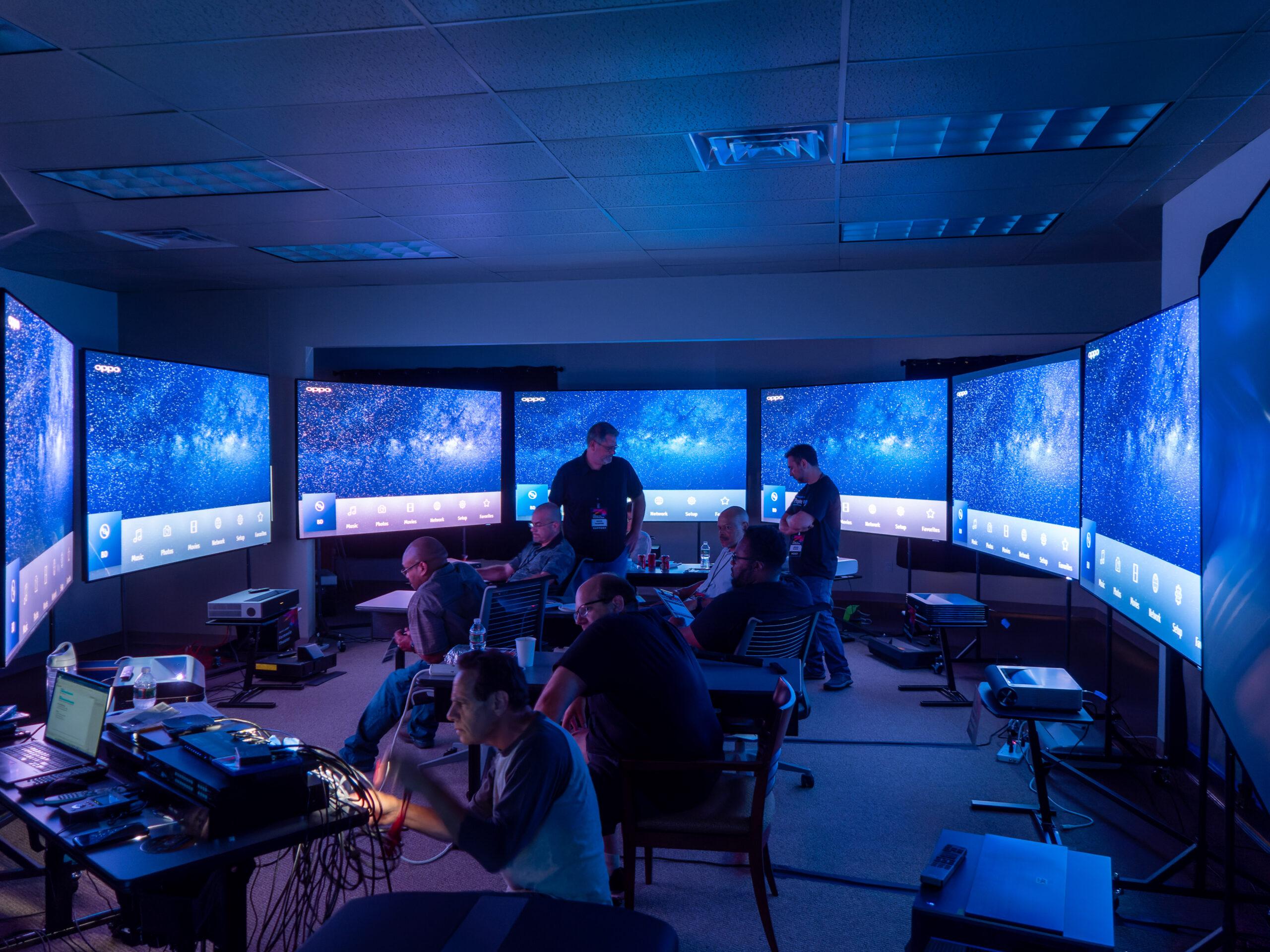 An unprecedented comparison of the hottest Laser TV-style projection systems 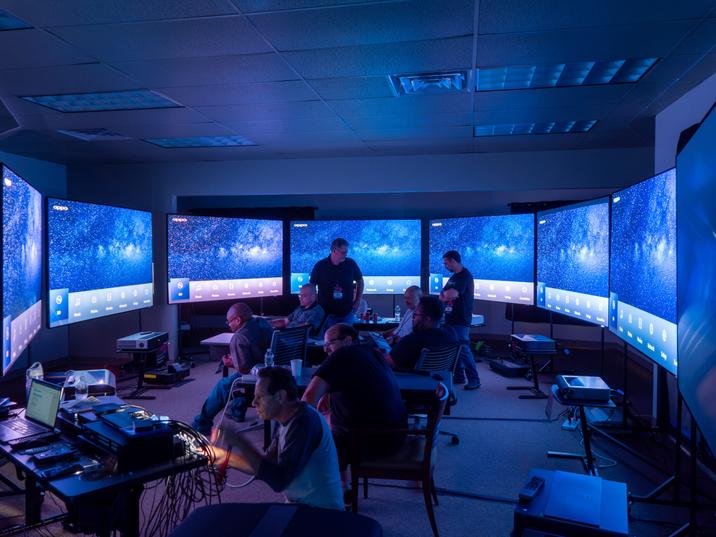 The inaugural ProjectorScreen.com and ProjectorCentral.com UST showdown that took place last Thursday is the first to pit the majority of currently available (in the U.S.) 4K UST projectors against one another—14 in all. We're talking about an epic showdown, with 100" screens arranged in a semi-circle, with a JVC NX8 projector in a darkened side space to serve as a reference.

Expert judges did the scoring, and I happened to be one of those judges! The event occurred at the headquarters of ProjectorScreen.com, and much credit is due to company founder and President, Brian Gluck for making it happen. Brian's company is an independent operation in the hilly part of northern New Jersey, one that is dedicated to providing consumer and commercial projection solutions.

The judging criteria and overall setup—a light-controlled room with all the projectors facing the judges for easy comparison—were created and coordinated by Rob Sabin, the Editor-in-Chief at ProjectorCentral where I have written several reviews featuring the projectors in this roundup. Meanwhile, the judging was performed by myself and the following five picture quality experts (listed in reverse alphabetic order)

Calibrations were performed by professional calibrator Dave Harper, who worked to get each projector to produce as bright an optimized picture as possible.

The event took place in two rounds. The projectors were judged in several categories that mirror typical uses: Bright and dark room viewing of SDR plus HDR content, everything ranging from broadcast TV to movies to difficult-to-reproduce test patterns and clips. Numerous performance parameters ranged from color accuracy to contrast to motion handling, to HDR tone mapping.

What is a UST?

First, a primer. UST projectors are sometimes referred to as Laser TVs, although not all of them have actual TV tuners in them (some do). UST stands for ultra short throw, and the idea behind these projectors is you place them right underneath the screen, as opposed to on a table or ceiling mount as you would with a short throw or a long throw projector.

From a marketing perspective, USTs are promoted as an alternative to big screen TVs. However, there is some focus in home theater-type applications, especially with newer models that tout movie playback credentials, such as having a FilmMaker mode.

There are several advantages to the UST approach, including ease of installation, compatibility with screens that are highly effective at rejecting ambient light, and there is no possibility of anybody walking in front of the projector and blocking the image. The specialized lenticular screens that work with them are sold in 100-inch and 120-inch (diagonal) 16:9 ratio screen sizes.

In the showdown, there were two separate UST categories: Single laser and triple laser. The primary difference is that triple laser USTs can reproduce a wider range of colors. But they have their issues, including susceptibility to an artifact known as laser speckle, which manifests as a graininess where there should be none. But, because projectors have limited brightness and therefore don't reproduce HDR content properly, it is the extra saturation from the wider color gamut that makes the triple lasers stand out when showing HDR content.

And the Winner Is...

Actually, there are two official winners. One single laser, one triple laser.

The triple-laser winner is the bark horse candidate, the $2999 Formovie Theater. This projector beat out the LG HU915QB, which costs more than double at $6499, so that's an amazing result, especially because the number 3 & 4 projectors—Hisense PX1-Pro at $3499 and Samsung LSP9T at $6499 also cost more!

Notably, in my reviews for ProjectorCentral, I had slotted the LG as the top performer among the triple-lasers I have reviewed, followed closely by the Hisense. But, I had not reviewed the Formovie. So it was nice to see the expert panel's voting aligned with my review impressions, and exciting to see a new projector come along and set a new high bar for price and performance in this category. However, it should be noted that the LG's scoring is incredibly close to the Formovie and that the exact level of performance that you get out of the HU915QB depends on how much work you put into it. At the same time, the Formovie is basically plug-and-play.

As for the rest, the AWOL Vision LTV-3500 ($3999) came in fifth place and the VAVA Chroma came in last and lagged behind the pack by a sizeable margin. The score difference between the AWOL and VAVA is larger than the difference between the AWOL and Formovie, and my in-person impressions were the same; it was hard to ignore how the VAVA could not keep up with any of its competitors.

The winner of the single-laser UST showdown is the BenQ V7050 ($3499) which I find completely unsurprising; that was my favorite single laser that I have reviewed and stands apart from the competition in that it performs close to its peak output when it is properly calibrated, most other projectors tend to lose a significant amount of their rated brightness when you calibrate them for accurate movie playback (6500K color temperature).

The BenQ does many things right and it shows, it pulled ahead of numbers two and three in the single laser category—the Hisense 100L5G ($3999 with 100" screen) and ViewSonic X2000B ($2899) by a more significant margin than the Formovie Theater beat the triple-laser LG and Hisense offerings. But in this case, the number two spot single-laser option from Hisense does come with a screen, and the third place winner does have a significantly lower MSRP versus numbers one and two, so there's a good correlation between price and performance.

After the Viewsonic, the XGIMI Aura ($2499) took fourth place; it is a good projector that has limited calibration controls, so dialing in an accurate picture is just not possible. This held it back because it had fine contrast and did a lot of things pretty well.

The 5th place Epson LS500 almost doesn't belong in this competition, it is an industrial design with a notably longer throw ratio (meaning it sits farther away from the screen than the others). But it has a couple of things going for it, it's extremely bright, and it has a very low input lag, so it's good for gamers. But it was also expensive.

6th place is held by the Samsung LSP7T ($3499), which is the company's single laser offering and unfortunately, it did not come up with anything to recommend it versus its competitors. Nevertheless, it outscored the single-laser UST from Samsung’s arch competitor, the LG HU715Q ($2999). That projector appeared to really struggle with color accuracy, and skin tones did the worst in that category which happens to be one of the most important. I was personally a little bit surprised by the bad showing of the LG since when I review that I was able to coax it into creating a highly accurate picture.

And in what turns out to be a bit of a surprise, the Optoma P2 ($3299) came in last place. Despite being the company's second 4K UST, it is one of the earlier entries in the category, and when it first came out, it was an impressive piece of hardware. But, this just shows how quickly this category is progressing, now it is a last-place finisher, so hopefully, we'll see something new from the company that replaces it and raises the bar.

Man pointing tv remote control at world’s biggest television that towers over him shining bright light in a dimly lit room with clean blank screen for your message and image sending a powerful message
Battle of the Big Screens: UST Projectors vs Huge TVs