IHS reports that worldwide 4K TV shipments experienced strong growth in the first quarter of 2015, up nearly 400 percent from the same time last year. Demand was especially in strong in China, which accounted for over half of the... 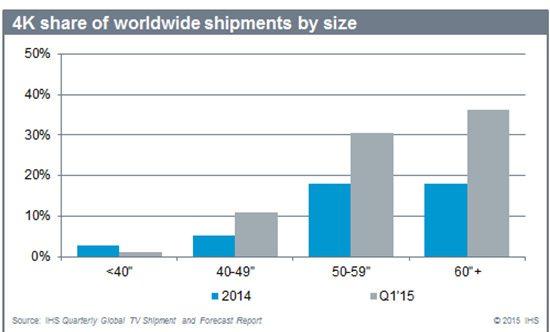 IHS reports that worldwide 4K TV shipments experienced strong growth in the first quarter of 2015, up nearly 400 percent from the same time last year. Demand was especially in strong in China, which accounted for over half of the global demand. At screen sizes of 50 inches and larger, 31 percent of TV shipments were 4K, and Samsung was the top brand in terms of revenue, owning 32 percent of global 4K TV sales.

From IHS
4K LCD TV shipments grew nearly 400 percent Y/Y to reach 4.7 million units worldwide in Q1'15. Volume barely dropped from the seasonally strong Q4'14, with especially strong demand in China during the Chinese New Year holiday season, according to IHS Inc., the leading global source of critical information and insight. However, growth for the rest of the TV market was not as robust in Q1. Overall TV shipments, including LCD, plasma, OLED, and CRT, fell 2 percent Y/Y, while LCD TV shipments alone rose almost 3 percent. The disparity in growth has to do with the significant reduction in both plasma and CRT shipments compared to a year ago.

The latest IHS Quarterly Global TV Shipment and Forecast Report notes that the slowdown in overall growth has not seriously affected the 4K TV segment, which continues to benefit from falling price premiums, expanded selection, and growing content availability. 4K TV shipments to China increased by 244 percent Y/Y to more than 2.6 million units in Q1 2015.

"4K TV shipments in China account for over half of global demand and set a new high-water mark in the world's largest 4K market," said Paul Gagnon, director of TV research for IHS. "This growth was driven by an expanded assortment of screen sizes between 40" and 50" that have recently become available from manufacturers, and retail premiums well below 50%, which is encouraging consumers to upgrade."

Availability of 4K TVs is primarily limited to screen sizes larger than 40", where the benefit can be most clearly observed, and also in regions where consumers are more willing to spend a premium to upgrade. Overall, 9 percent of all TV shipments in Q1'15 were 4K TVs, but when looking at larger screen sizes, the share of shipments rises significantly. More than 31 percent of 50" and larger TVs were 4K TVs.

Based on revenue, Samsung Electronics was the top brand shipping 4K TVs in Q1'15, accounting for more than 32 percent of worldwide 4K TV sales, which are down slightly since Q4'14. Even so, the strong seasonal shift to China meant that Chinese brands gained share during the quarter, owing to their relatively high mix of 4K TVs. Collectively, 4K TV accounted for 16 percent of Chinese brands' TV shipments in Q1'15. By comparison, 4K TV accounted for 11 percent of Samsung's TV shipments during the quarter. Fellow South Korean brand LG Electronics was the second-largest 4K TV brand in Q1, with a revenue share of 15 percent, followed by Hisense, Sony, and Skyworth.