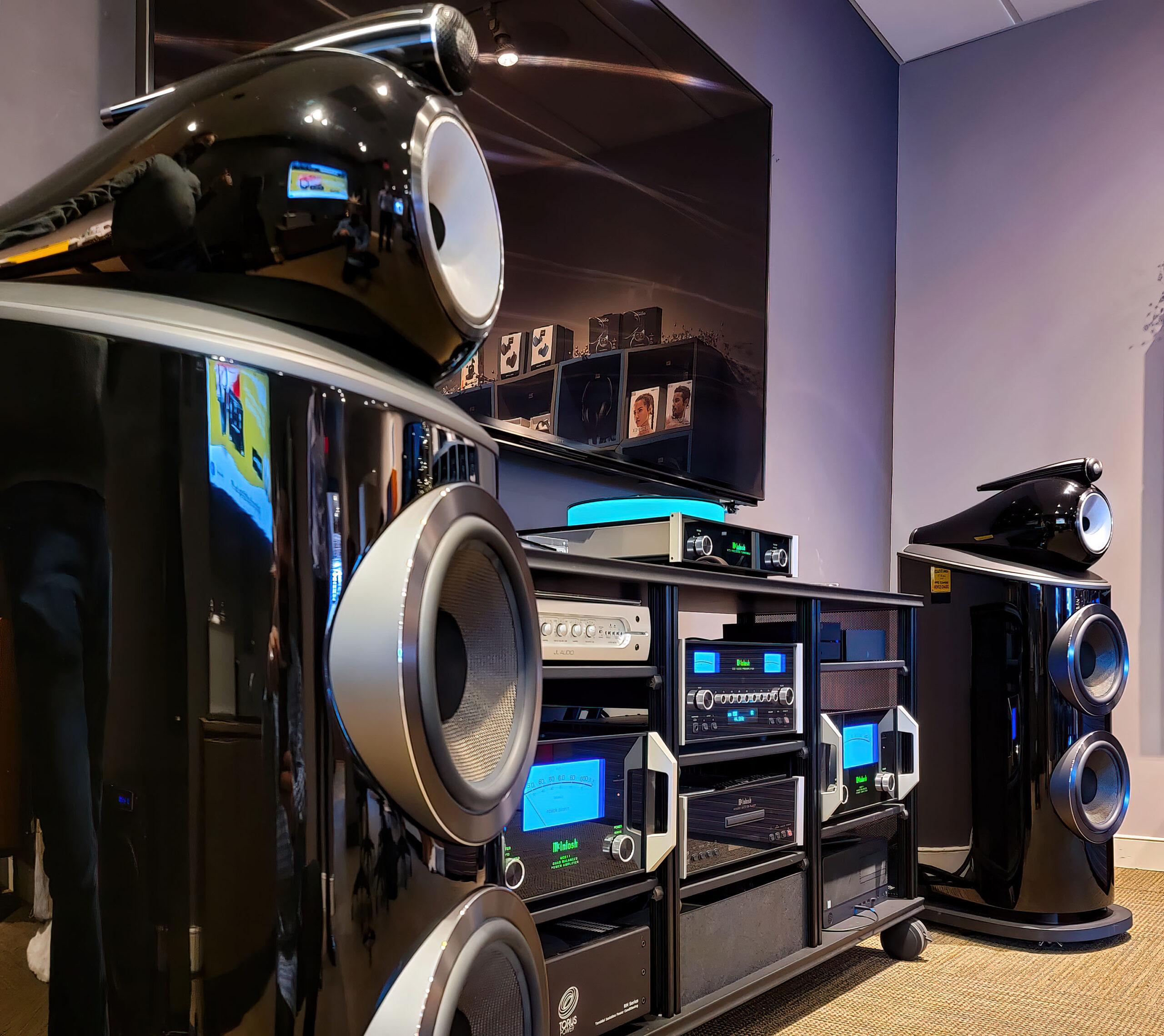 News, Floorstanding Speaker News
Published On: November 13, 2021
We May Earn From Purchases Via Links

The 801 D4 is the undisputed heavyweight champion of the Bowers & Wilkins speaker lineup. Hear what they sounded like at the demo. 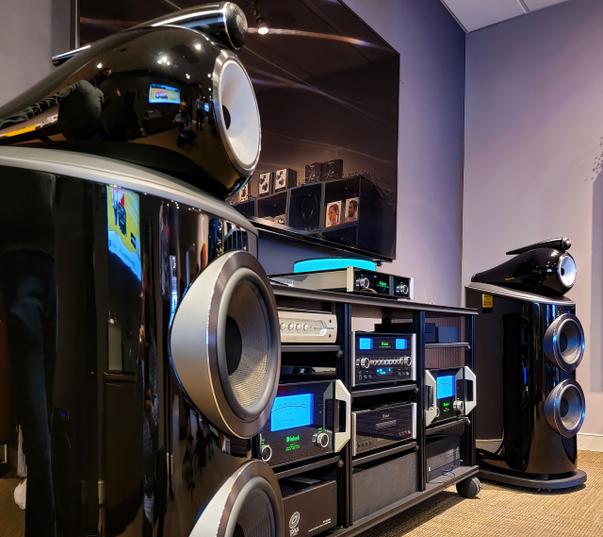 The world-famous high-end speaker brand Bowers and Wilkins earned its reputation through decades of research and development, releasing numerous seminal speaker models that introduced concepts such as housing the tweeter in a separate enclosure. Today, you’ll find the company’s speakers in the music listening rooms and home theaters of listeners who value high performance and style. But you’ll also find it speakers in the famous Abbey Road studios, and in the control room of the Boston Symphony, and in numerous other mission-critical production environments. So it is with all this in mind that I went to demo the new flagship, the 800 Series Diamond 801 D4 at my local B&W dealer.

The 801 D4 is a $35,000/pair technological tour-de-force. Its iconic design is instantly recognizable, with the tweeter and the midrange each housed within a “Turbine” head, thusly named because it physically resembles a jet engine. It’s a gorgeous speaker, and I’ve had the opportunity to visit the factory where they are made in Worthington, England, and can attest to the thorough and meticulous process the company applies to 800 series speaker manufacturing. The fundamental Bowers and Wilkins argument is that it enjoys economy of scale in the high-end segment of the speaker market, allowing it to create products that are thoroughly engineered for the highest level of performance, without necessarily being a complete “price no object” endeavor. And the “proof is in the pudding” is there for anyone to see you, in the world of high-end audio, someone can spend more on boutique high-end speaker cables than a pair of these speakers! Everything is relative.

Raw specifications tell the story of this cutting-edge super speaker. Do you want power handling? How about one kilowatt ask may shun point recommended amplifier power is 50 watts to 1000 watts and that's into an 8-ohm load. On-axis, the frequency response is rated at 15 Hz to 28 kHz +/-3 dB And furthermore Bowers & Wilkins states that harmonic distortion in the second and third harmonics are kept to underneath 1% from 30 Hz to 20 kHz and under 0.3% from 100 Hz to 20 kHz. These rock-solid speakers weigh 100.6 kilograms each, which is equivalent to 221.78 pounds.

Anyhow, this pair of speakers is on tour and for one day it was easily accessible by taking a trip to Ardmore, Pennsylvania, to the World Wide Stereo showroom. There, Bowers and Wilkins reps were holding small group demos every half hour. Not “let’s stuff as many people as we can into this room” type demos, but rather just four people maximum; very small, appropriately social distanced. And importantly, “everybody gets a good seat” kind of groups. Having said that, I showed up early and took the center seat, although I did yield it before the end when another listener made a request before they had to depart.

Bowers & Wilkins knows how to put on a good demo, I know this first-hand from numerous listening experiences ranging from at-home reviewing, to a mastering suite at Sterling Sound in NYC, to the listening rooms at the company's headquarters. And if there’s one thing consistent about the demos, it’s the obviousness of the improvements the company achieves when it releases an update to one of its speaker lines. And just a circle back, that is the motivation to check out the new flagship speakers from Bowers & Wilkins.

Before we get into sound, let's look at the beauty of this speaker. It's genuinely sexy, in a way few speakers are. It's got "exclusive" and "high performance" written all over it like you parked a McLaren in your living room—and you'll find Bowers & Wilkins speakers in McLaren sports cars. The cabinet itself is a work of art, on the inside and out. It's formed in a special press and reinforced by aluminum bracing and is rock-solid.

Do You Hear What I Hear?

For this demo, I thought I'd try something a little different. I brought a portable recorder and a pair of Roland CS-10EM in-ear monitors (about $75 on Amazon), which are equipped with condenser microphones, one on each earbud. It's not true binaural sound because the microphones are not located within my ear canal, but the stereo separation benefits greatly from having my head between mics, and also from the shape of my outer ear. Is it an accurate representation of what I heard? No. But it is an evocative simulation of what I heard, so check out this audio sample and note the positioning of the presenter as they move around, prior to the music coming in.

A Sony ICD-UX570 Digital Voice Recorder handled the actual recording, I chose it because the sound quality is decent, it's super pocketable, it has a built-in USB plug and rechargeable battery, and it provides plug-in power to the Roland mics.

Pay attention first to the voices in the room, and then to how the music sounds, and I do recommend decent headphones for this experience. Overall, while far from truly accurate, they capture more of the gist of the listening experience, the subjective, emotional experience of being there, than you'd expect. Of course, this includes some room reverb. It's important while watching this video, to remember that the particular sound you hear is influenced by the shape of my ears, by the microphones I used, and by the influence of the room.

And yet, I think you'll agree that the 801 D4 speakers sound amazing, even with this degree of detachment. in person, they are powerful, precise, and profound. Presented with the disclaimer... for entertainment purposes only!

Of course, I did not want to spend the whole demo with microphones stuck in my ears, and I soaked in the final track, played at healthy volume—the dual McIntosh M611 monoblock amps' huge meters indicated the B&Ws were taking using 50-100 watts, so the system still had significant untapped headroom (the amps are rated at 600 watts each). IMO at the volume level used, the whole experience was utterly mesmerizing and included what I can only describe as "tactile microtexture resolution" that is akin to the true "feel" of live music. With 801 D4 speakers, you don't just feel the bass, you literally feel the energy from the entire audible spectrum of music tingling your goosebumps.

So what's going on with the 801 D4 that's so special? The primary focus of this new design is the spider used in the midrange. Bowers and Wilkins focused on illuminating any mechanical noise that is caused by the spider’s movement. What the company came up with, which it had patented 17 years ago but finally found an application for in this speaker. The company refers to it as a Biometric Suspension. It basically eliminates most of the spider's structure, replacing the fabric with six thin, flexible arms. The company says this massively reduces the buildup of air pressure and coloration that can be imparted by a fabric spider, and that the new mechanism is so silent, they've yet to figure out a way how to measure whatever noise it might theoretically make.

A key element of the new design is the spider used in the midrange. Bowers and Wilkins focused on illuminating any mechanical noise that is caused by the spider’s movement. What the company came up with, which it had patented 17 years ago but finally found an application for in this speaker. The company refers to it as a Biometric Suspension. It basically eliminates most of the spider's structure, replacing the fabric with six thin, flexible arms. The company says this massively reduces the buildup of air pressure and coloration that can be imparted by a fabric spider, and that the new mechanism is so silent that they've yet to figure out a way how to measure it, whatever noise it might theoretically make.