TWICE is reporting that Acer will introduce its first 4K Ultra HD projector, the V9800, to the Americas in January 2017. Back at CES in January, Texas Instruments officially announced its 4K UHD chipset, which is designed for use in... 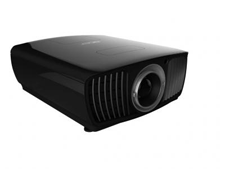 TWICE is reporting that Acer will introduce its first 4K Ultra HD projector, the V9800, to the Americas in January 2017. Back at CES in January, Texas Instruments officially announced its 4K UHD chipset, which is designed for use in single-chip DLP projectors. Although Acer has not yet announced pricing on this projector, TI's stated goal with the new chip is to offer a more affordable UHD solution than the native and "4K enhancement" projectors currently being offered by Sony, JVC, and Epson.

From TWICE
Acer went to the Computex trade show in Taiwan to unveil its first 4K Ultra HD projector for home theaters, planning January availability of the V9800 in the Americas.

The front lamp-based projector, whose priced wasn't revealed, will use the Texas Instruments 4K DMD (digital micromirror device) chip unveiled at CES 2016. The chip was developed to provide high resolution and high brightness at price points designed for a broad audience. The chip is also designed to compete against native or pixel-shifting 4K liquid crystal on silicon (LCoS) chips. LCoS designs combine three 1080p-native panels with pixel-shifting technology, which shifts pixels diagonally by 0.5 pixels at a rate up to 120Hz to multiply resolution.

The V9800 will deliver native 3,840 by 2,160 resolution, UHD up-scaling, and Rec. 709 color gamut, which isn't as wide as the P3-DCI gamut appearing in commercial digital cinemas. Rec. 709 is used on Blu-ray discs and 4K streaming services.

The projector is also said to operate at a low noise level of 20 dBA so that low-volume dialog isn't masked by projector noise.