Amplifiers are one of the most important components in any system. They are the unit that drives the speakers. This entry breaks down general information as well as specifics about all the different types of amplifiers

Amplifiers are what most loudspeakers need to create sound. Many different technologies exist, and much like speakers, amps are available at all price points.

Class A amplifiers were at one point the audiophile’s choice, but their low-power, ultra-high heat output, often large size and huge incoming power requirements (240 volts are best for Class A amps) have seen them fall out of favor. Their pure sound is hard to argue with, but they don’t easily keep up with the needs of film soundtrack playback. They also sound best after being warmed up for hours. They have no real ability (by design) to do anything but to run at full power, so their draw from the wall is as strong as you can find. The analogy used by many to describe Class A amplifiers is that they are like faucets that are turned all the way on.

Class AB is what is considered to be a traditional amplifier technology. It can be used for either tube or solid state designs. Solid state designs are known for their heat sinks, large toroidal transformers and overall weight. Class AB amplifiers are still the preferred choice of audiophiles because of their powerful, clean sound, but digital amplifier designs have made significant improvements over the past few years. At the ultimate level, there are now hybrid audiophile-grade class AB/digital amps.

Digital power amplifiers (also known as class D or switching amplifiers) have long been used by sound reinforcement systems because of their high power, light weight and low heat output. Digital amplifiers are also quite reliable, which has led to their popularity in commercial installations. Bob Carver, the founder of Sunfire, used digital amplification in his famous “True” subwoofers that were groundbreakingly small, yet could output deep, low bass from an 11-inch square box. The vast power reserves were part of Carver’s genius. Carver patented the True subwoofers, but ultimately lost a lawsuit to other loudspeakers companies, based on the validity of the patent. In the latter part of the current decade, mainly driven by Bang and Oulfsen’s ICE technology, there is an entirely new camp of more audiophile-driven class D digital amplifiers. Audiophiles rave about how quiet digital amps can sound compared to traditional class AB amplifiers. Their lack of heat, small size, lighter weight and lower cost are additional factors that are inspiring consumers to rethink amplifier technology for their reference audiophile or home theater system. 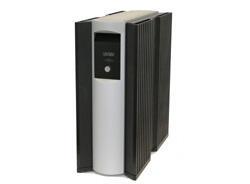 The cost, use and other benefits make class D amplifiers sound like a perfect solution, but critical listeners will be quick to warn consumers that the best possible sound still comes from heavy, power-hungry class AB amplifiers. Audiophiles talk about the “weight” of the sound (not of the amp) of class AB amps compared to digital amplifiers, as they have a more full-bodied sound, richer textures and a very different flavor than the way a playback system sounds.

Mark Levinson’s No. 53 reference power amplifiers, which were introduced at the 2008 CEDIA tradeshow, use a hybrid proprietary class AB and digital amp to try to combine the “heft” of a traditional amp with the benefits of digital amps. The Mark Levinson No. 53 mono power amplifiers are about as expensive as any amplifier currently on the market.

Monoblock or mono amplifiers are often the preferred choice of audiophiles, used in the most demanding home theater playback systems. Mono refers to the idea that one physical amplifier is designed to power one audio channel. The main advantage of mono amplifiers is the concept that each channel of audio gets its own power supply and can therefore more accurately and effectively provide the power needed in an audiophile or 7.1 speaker system, as the source material demands. Some audiophile brands make dual or even tri-mono amplifiers, which house multiple mono amps in the same chassis, yet retain the advantages of the mono design. This normally comes at a significant cost premium. Monoblock amplifiers are commonly found in all varieties of amplifiers, including tube amps, solid state amps and even class D “digital” amplifiers.

Amps on the Floor

Audiophiles have long had a tradition of installing their amplifiers close to their favorite speakers. It is not uncommon to see a system with monoblock amplifiers resting on a polished chunk of granite or a purpose-built amplifier stand right next to a pair of top-performing speakers.

You'll automatically be entered in the HTR Sweepstakes, and get the hottest audio deals directly in your inbox.
0 0 votes
Article Rating
Subscribe
Connect withD
Login
Connect withD
0 Comments
Inline Feedbacks
View all comments
Author
hometheater
When you buy through links on our site, we may earn an affiliate commission. Your support is greatly appreciated!
This is the static ad content. This is just a placeholder for now to get things styled.
Visit Website