Android TV Next To Join The Fray

Android TV Next To Join The Fray

With Apple TV, Amazon's Fire TV and a host of other options like the Roku 3 and Chromecast, the waters for alternative TV devices have only gotten murkier as of late. That hasn't stopped Google from entering the fray with... 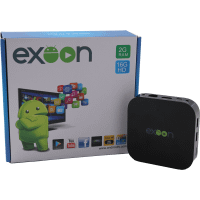 With Apple TV, Amazon's Fire TV and a host of other options like the Roku 3 and Chromecast, the waters for alternative TV devices have only gotten murkier as of late. That hasn't stopped Google from entering the fray with its new Android TV platform. Like all the rest of the nu-TV choices out there, it has its own set of advantages and disadvantages, so whether or not its the best system for you is up to you.

From US News and World Report
Google may be ready to dial up the fight for online TV with the launch of a new Android TV platform during its Google I/O developer conference, which begins June 25, according to reports. Google's latest foray into the market would escalate competition for online TV viewers with companies such as Amazon and Apple.

The search giant stumbled in this space after launching the Google TV software platform in 2010, which attempted to blend pay TV services with apps, but failed to gain popularity opposite the Apple TV or Roku set-top box offerings. Google has since offered a simpler Chromecast device that allows users to stream video from their computer onto televisions, and the new Android TV software platform will likely also have a simple design, tech blog Gigaom reports.

Android TV will likely match some of the online media services offered by the Fire TV recently launched by Amazon, including offering video games based on Google's Android system, Gigaom reports. Sony partnered with the search giant on Google TV, and may remain a hardware partner for the new Android TV system, along with Vizio and Haier, according to Gigaom.

Google could expand on its Chromecast success by launching a new Web TV service to cater to developers and the consumer electronics market, says Mike McGuire, media and digital marketing analyst at Gartner, an information technology research firm.

"They are looking to engage developers to make full-blown apps for a service like this," McGuire says.

Producing programs for the Web is easier than ever, so Google and other companies may begin opening their online TV platforms beyond the walled garden of their services to a broader range of developers eager to promote using video ads or new applications, McGuire says.

The Apple TV is a well-engineered piece of hardware, but its last major upgrade was in 2012, McGuire says. Fire TV has some newer features that Apple TV lacks, including gaming, but it is unlikely that Apple will unveil upgrades to its system during its Worldwide Developers Conference, which begins Monday.

Here are a few strengths and weaknesses of the top online TV systems:

Voice search: Amazon Fire TV uses a voice search feature. Search giant Google may offer that feature on it as part of its ambition to expand voice search to more services. Voice search is possible on Apple TV for people using the Remote iOS application on any device using the company's operating system. Apple could make this service more easily integrated in the system as other Web TV products become simpler.

Gaming: Consoles such as Microsoft's Xbox are more complicated than set top boxes but Fire TV has offered some competition with the goal of creating its own video games, the first of which is futuristic third-person shooter "Sev Zero," available for $6.99 or free with the purchase of a Fire game controller. Android TV will reportedly offer games but it is unclear how deep Google is willing to invest in gaming as part of its suite of products. Apple TV offers no games on its system, so there may be room for an upgrade if the company sees worth in that service.

Content: Every company needs more programming for its Web TV service, McGuire says. Android TV will likely offer popular outlets including Hulu and Netflix, but Apple may have the upper hand securing programming going forward because of its history partnering with music companies for iTunes. Google and Amazon may have to overcome tense relationships with content owners to expand video offerings on their services, McGuire says. Google's YouTube faces copyright tensions with large companies vetting its free video and audio, while Amazon's low prices on products have disrupted the business models of sectors such as book publishers.

"Some of the content guys are worried how they are going to price content," McGuire says. "The last thing broadcasters want is to face the same kind of trouble that the book publishers have faced with Amazon's low pricing."

Price: Price is one area where Google has the upper hand with its $35 Chromecast, compared with the $99 Fire TV and the $99 Apple TV minicomputer. It is unclear what the Android TV may cost, but price can be the deciding factor for a consumer shopping for a device, as seen with the success of the $399 PlayStation 4 against the $499 Xbox One.

The Great "Voice Search" Face Off