Jerry calls the Anthem MDX-8 amp one of the most forward-thinking products he's seen and heard in ages. 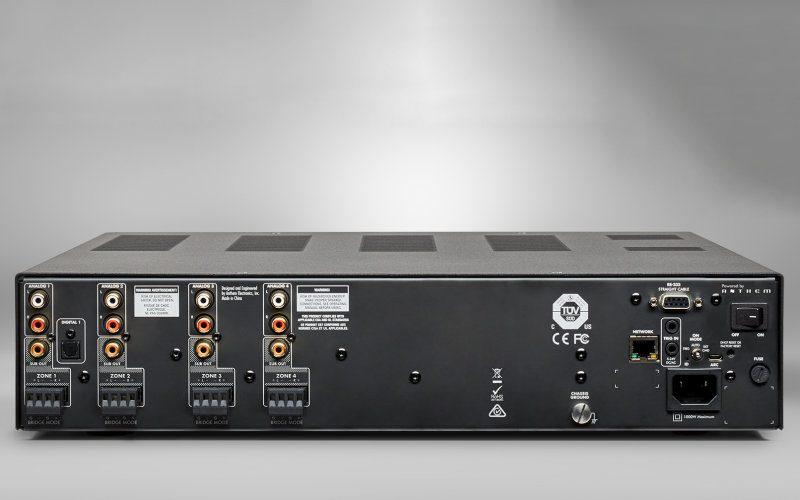 As long as I have the money to spend and can take a swing for the technological fences, I normally do so. In my new home, I had the opportunity to design and install a new-school distributed audio system fronted mainly by source components such as Sonos Connect (eight of them, with the new Port coming soon). I bailed from the more expensive and complicated Crestron SWAMP products, since there are simple less complicated, less expensive ways to get even better performance these days.

In less critical zones, such as the garage, outdoors, and ancillary rooms, I used an Episode Class D distribution amp (reviewed here). For the price, the Episode was fine for where I ultimately used it, but for the more critical rooms in my home. mainly those with Nakymatone Echt or Stealth Acoustics LRX-83 invisible speakers, both paired with Gray Sound in-ceiling subwoofers, I powered them with something tasty and new from Anthem.

The $1,995 Anthem MDX-8 was the belle of the ball at last fall’s CEDIA show for Anthem, as this Class D amp is designed to be a custom installer’s dream. Somebody on their design team knows how to do a feature matrix, because the MDX-8 has everything you could want from a distribution amp, including subwoofer outputs on every one of the eight channels (four zones), full bass management of the sort you’d see in a good AV receiver, a 24/192 DAC for incoming signals, and IP and RS-232 control with partnerships with every control company you could conceivably care about, from Control4 to Savant to Crestron. You can also log into the setup screen via a webpage to make setup that much easier. Perhaps the coolest thing about the Anthem MDX-8, though, is that it comes packing the company’s ARC Genesis room correction. Using software to your Mac or PC, combined with the ARC microphone, you can tune a room in a distributed audio system to sound really, really good. Remember all of those houses that you’ve been to that had crappy hardware store in-wall speakers that sounded thin, wimpy, and shrill? Forget that sound forever with a setup like this one. With invisible speakers, a hidden subwoofer, and a little ARC magic, you can have an awful lot of the performance of a big, bulky audiophile system in a room where you can’t see a single audio component. No floorstanding speakers on the floor. No racks of amps. No cables. No subwoofer in the corner. No mess. Just finely tuned audio that goes close to 20 Hz to 20 kHz without having to see it. This is a game changer.

While you can by all means take on setting up an Anthem MDX-8 (or MDX-16 for that matter) on your own, mine was part of a professionally installed audio and control system. Dennis Burger, our room correction expert here at HomeTheaterReivew.com, covers the intricacies of ARC in this article, although it should be noted that this was the previous version. I can tell you that the rooms that we are trying to squeeze audio into these days aren’t always perfectly suited for the job, and having a powerful tool like Anthem ARC Genesis is big news if you are trying to make some audio wrongs right.


I was able to swap the Anthem MDX-8 and Episode amp in and out of some of the more premium rooms in my distributed audio system during the course of my testing. I started off my critical listening with “Human Nature” from Michael Jackson’s Thriller, as I will never forget how this track sounded on SACD with Krell’s top-of-the-line electronics (pre-Dan D’Agostino exit) packing 900 watts of power on my old Wilson Audio WATT Puppy version 7 speakers in my previous home. Andrew Robinson came over to hear this setup at unbelievably high levels (I don’t listen as loudly anymore, nor do I drive as fast — I think I might be getting old) and what was so impressive to me at the time was how this Quincy Jones-produced track highlighted production details that I had simply never heard before — most specifically the subtle chimes behind the vocal track. And from a $100,000-plus audiophile system in a fully acoustically treated dedicated listening room, you might expect that type of audio theatrics.

But what if you could hear much the same level of performance from an invisible in-ceiling speaker and sub combination? Guess what? I can and so could you. The space on this well-produced track is open and the guitar tones and brushed drums are in their place with other small audio details dancing all over the room. This isn’t the way that I’ve ever talked about a distributed audio system. Not even close.


For a a little bit more musical drama, I cued up “Right Now” by Van Halen (1440 AIFF) from The Best of Van Halen. While I am much more a fan of David Lee Roth era Van Halen, this track has a powerful backbeat, a driving piano melody, and well-recorded Sammy Hagar vocals. At about 1:43, you can hear Alex Van Halen whaling on his (likely China boy) cymbals which, on the Episode amp and without room correction, sounded shriller. With the Anthem MDX-8 in the living room system, the highs were lively and realistic but not overwhelming or annoying at all. This is what we all would expect from an audiophile system, but coming from a system that you literally cannot see.


It’s always good to push a system to its limits when doing a review, so I cranked up “My Hero” from Foo Fighters’ The Colour and the Shape (AIFF 1440). At wife-out-of-the-house levels, the huge Dave Grohl drum sound was so gigantic that I decided to use Sonos to add other rooms to the mix to push the limit of the amp with all channels driven, thus creating a whole-home concert effect.

I know not all power is created equally, and companies like Anthem rate their amps more conservatively, but trust me: unless you a powering some 2-ohm, pig-like speakers, the Anthem MDX-8 isn’t soon going to run out of power or overheat. The Class D power runs cool, which is key as most of these installations go into racks that can get very hot. It is also nice to know that the amp can be driven to its limits without signs of strain or struggle.

The closest thing I could find for competition is the $1,200 Episode EA-DYN-8D-100 amp that I recently reviewed and also used in my system. It has a little more power for a significantly lower price, but it doesn’t have Anthem ARC Genesis room correction, which is a big feature. For ancillary rooms like bedrooms, bathrooms, garage work spaces, or outside, you are likely OK without room correction, which is why I bought the Episode. For more critical listening situations, you will benefit from the Anthem ARC if you can justify the costs.

Of course there is also the Anthem MDX-16, which is basically double the love from a $2,995 product and clearly a good value.

There are many other, somewhat under-the-radar products in the distribution amp space from brands like Sonance, Crestron, Russound, and others. I have suggested that more audiophile companies embrace this category, but design resources are often limited there. My argument is: the people who can afford an object-based surround sound system complete with 12-plus channels of home theater audio also can justify matching gear from the same company. Why does audiophile product have to be in a traditional two-channel system configuration when we have new form factors like hidden subs and invisible speakers?

Conclusion
The Anthem MDX-8 is one of the most forward-thinking products that has come out in a long time. Custom installers who sell Anthem will love it. Others will open the line to get the amp, as it is that good of a product.

When you look big picture, the idea that, in early 2020, we can deliver audiophile quality sound from a distributed audio system is something new that mainstream customers well beyond the scope of enthusiasts will and can appreciate. When you look at how much this category has changed over the past five or so years and see that not only is there a whole new level of performance, access, control, and flexibility, but that the cost to do it the new, cooler way is significantly lower than before — that’s a tempting upgrade for many us.

You'll automatically be entered in the HTR Sweepstakes, and get the hottest audio deals directly in your inbox.
0 0 vote
Article Rating
Subscribe
Connect withD
Login
Connect withD
4 Comments
Oldest
Newest Most Voted
Inline Feedbacks
View all comments
Author
Jerry Del Colliano
HomeTheaterReview Product Rating
Value:
Performance:
Overall Rating:
When you buy through links on our site, we may earn an affiliate commission. Your support is greatly appreciated!
This is the static ad content. This is just a placeholder for now to get things styled.
Visit Website