Anthem has aptly named the Statement M1 amplifier as the amplifier as it definitely makes a statement with the technology inside and the amount of power packed inside a slim package. 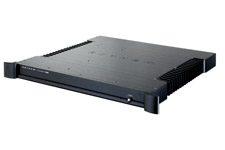 What’s more, the M1 makes radical improvements over previous Class D amplifier designs while still maintaining all of the benefits that Class D design brings to the table. Class D architecture provides tremendous value over traditional Class A and Class AB designs because of its efficient output and smaller form factor, both of which the M1 perfectly embodies. Its heat pipe cooling system and deep side-mounted heat sinks allow multiple M1s, with feet removed, to be rack-mounted directly on one another, each occupying only a single rack unit. Its fanless design also makes the M1 as well-suited for the quietest of listening rooms as it is the most crowded equipment closets.

“The Anthem design team conceptualized the M1 almost 10 years ago, illustrating just how much in-house design and engineering went into producing this amplifier,” said Mark Aling, director of marketing for Anthem. “More than just a slim, technologically advanced monaural, the M1 demonstrates that Class D architecture isn’t fundamentally flawed, it merely hasn’t been implemented well in the past, mainly because it required such a heavy commitment to R&D. We’re fortunate to have the resources necessary to create such a groundbreaking product and strongly believe our customers will appreciate the effort.”

Don’t be confused by the “D” in “Class D”–the Statement M1 is not a digital amplifier. It boasts all the warmth and clarity of a traditional amp, in addition to a temporal resolution reportedly more than 80 times that of the SACD format, and does so with an astounding amount of power. While Anthem’s own award-winning Statement P5, for example, outputs 500 watts with a 4-ohm load, the M1 delivers 2,000 watts to the same speaker, with total harmonic distortion remaining under 0.1% from 20 Hz to 20 kHz. (Into 8 ohms, it delivers 1000 watts with a less than 0.06% total harmonic distortion.) And frequency response is load-independent, so the difference in response between a 2-ohm load and an open circuit is an astounding 0.1 dB at 20 kHz. Between 4 ohms and 8 ohms there is absolutely no change in frequency response.

The Statement M1 attains this level of power, performance, and consistency through the employment of a few key technologies, including a proprietary load monitoring system that relies on a Digital Signal Processor–outside the signal path!–to monitor line voltage, output current, ground fault detection, temperature, and DC voltage at the output to ensure the highest possible output from either a 120V or 240V circuit. Power Factor Correction maximizes available power by marrying the voltage and current cycles, enabling continuous output from the power supply through the entire AC cycle without contaminating the AC line with noise.

While all of this innovation adds up to an amplifier that is admittedly not inexpensive, the Anthem Statement M1 nonetheless represents an unparalleled value in terms of price versus performance, with ample headroom to drive even the most power-hungry speakers, and the utmost in clarity and focus demanded by the most discerning listeners.