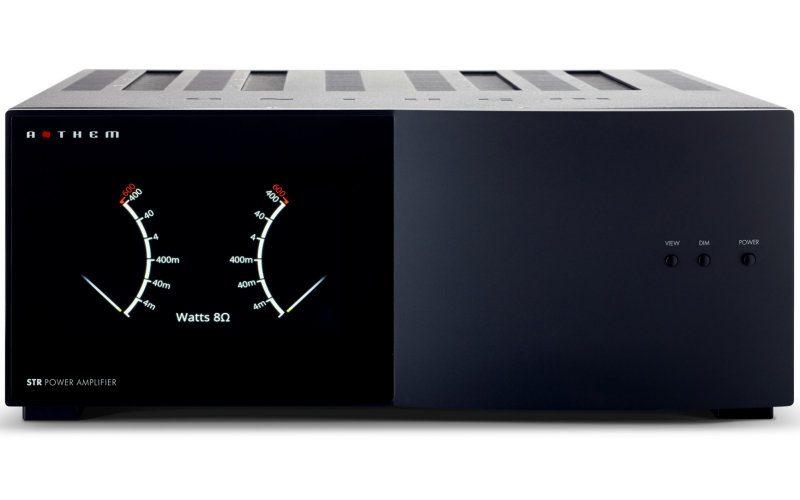 STR is Anthem's new flagship two-channel line comprised of three models so far: the STR Integrated Amplifier, the STR Preamplifier (reviewed here), and the subject of this review--the Anthem STR Power Amplifier priced at $5,999. For the longest time, the... 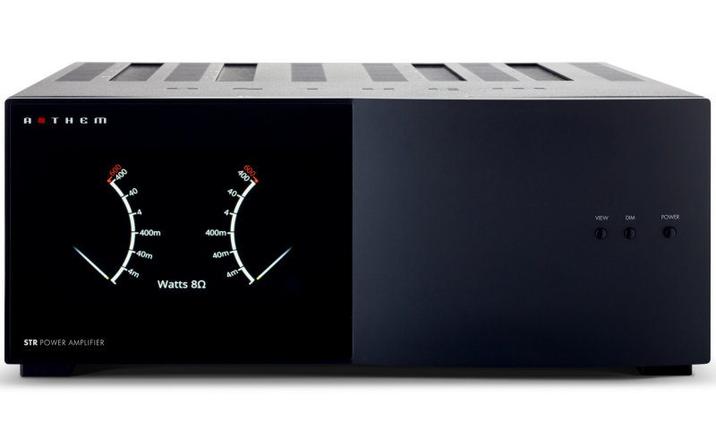 STR is Anthem's new flagship two-channel line comprised of three models so far: the STR Integrated Amplifier, the STR Preamplifier (reviewed here), and the subject of this review--the Anthem STR Power Amplifier priced at $5,999. For the longest time, the Statement P2 was Anthem's flagship stereo amplifier. Its multichannel brother, the P5, served as my reference home theater amplifier for many years.

For this new lineup, though, the traditional styling of the old P Series wouldn't quite work. The STR Power Amplifier is as much a conversation starter due to its front-panel TFT display as it is for its under-the-hood oomph, which is impressive indeed.

The Hookup
Upon unboxing the Anthem STR, the first thing you notice is that the chassis is just beautifully machined. The metallic black casing stands in stark contrast with the white digital display, which includes two power output meters--one for each channel (there is a silver option too). In an odd way, the very new-school gauge reminds me of the appeal of classic McIntosh physical gauges. A white-lettered digital display lights up, allowing the user to monitor power output and a host of other things, like temperature and status. The component dimensions on the Anthem STR amp are shorter and smaller than the P2 amplifier of old, and the amp weighs 15 pounds less than its predecessor. That's actually quite a feat of engineering considering power output went up from the P2's 325 watts per channel to 400 watts per channel. Usually, for Class AB amplifiers, all things being equal, the more powerful the amplifier, the bigger it is and more it weighs.

Forgoing the use of output relays in the design, the STR amplifier features a more direct connection to the outputs than its predecessors. Lower standby power consumption as well as more intelligent failsafes add to the improvements.

Performance
To most of our readers, of greatest concern would be how the Anthem STR amplifier actually sounds. For my testing equipment, controlling the STR amplifier was either its companion Anthem STR DAC-preamp or my reference Parasound Halo JC2BP preamplifier. Similarly, I alternated between my reference Salk Signature Soundscape 12 speakers and a pair of Persona 5F speakers from Anthem sister brand Paradigm. With 12-inch woofers to drive, my Soundscape speakers are a great torture test for how much sustained power an amp can deliver.


Pushed to the max on movie soundtracks like The Dark Knight (Warner Brothers) and Tron: Legacy (Disney), the STR amplifier did not disappoint. Bass was earth-shakingly (or room-and-wall-shakingly) powerful, but the amp also delivered a level of tightness and detail I seldom ever hear in amplifiers priced under $10,000. The Anthem STR amp enabled full-power orchestral music (think: Stravinsky's the Rite of Spring) to sound simply majestic--fully delivering on the scale of the presentation, dynamics, and complexity.

Volume and scale are one thing. But the true test of the best amplifiers out there is whether they can deliver the former in combination with musicality, clarity, and finesse. And the Anthem STR amplifier truly delivered. It's one of those amplifiers where my first gut reaction was an emphatic wow, and then came the task of scrambling to find the words adequate to describe the emotion. It handled every bit of source material, be it music or video soundtrack, with equal aplomb. It dutifully played its part in every system combination of preamplification I threw at it. And it happily made every speaker pair I had in the house shine at their best.

Competition and Comparison
The Parasound Halo JC5 amplifier that I recently reviewed comes immediately to mind as competition for the STR, both being priced equally at $6,000 retail. While the Parasound is very exacting and emphasized some of the finer musical details, the Anthem STR sounded comparatively rich and tonally well balanced. In terms of power output, though, the Anthem won out hands down. Where the Parasound was pushed to its limits with my Salks at volume, the Anthem STR sounded effortless. The Parasound does earn some ease-of-handling points with its built-in metal grips.

Anthem's own P2 is a contender, being $1,500 less expensive than the flagship STR. There no question that the Anthem STR amplifier sounds better, looks way cooler, is more powerful. and fits in a smaller box, as well-being 15 pounds lighter. That's a lot of extra value for the money.


For half the price of the Anthem STR amplifier, there is the Benchmark AHB2, which is a great buy but won't match the Anthem on either overall power or sonic finesse.

At about $2,000 less, the ATI Signature 6002 will give the Anthem a run for its money on power output. But I think you'll find that the level of refinement on the Anthem makes it a clear sonic winner.

To look to the next level of sonic excellence, you might need to consider brands like Pass Labs. For $800 more than the Anthem, the Pass Labs XA30.8 will give you the coveted Class A sound quality and a Nelson Pass design. Some might be scared that 30 watts could never be enough, but these Pass Labs amps rarely go above the 30 watts and when they do, they go into Class AB mode and have tons more power and current to give. If power is your concern, then the $10,000 Pass Labs X250.8 could be your answer. It doesn't quite have that tube-like allure of Class A Pass Labs amps but it will keep your electric bill down and has power to spare.

$5,999 is by no means an entry level price point for a stereo amplifier, but all things considered, the Anthem STR amplifier is a rock-solid value. Without question there are less expensive amplifiers on the market today. There are also amplifiers with more power, more refinement, and so on. What I can't find is an amplifier that can bring both camps together better than the Anthem STR.

I have been blessed to review a lot of really cool amps recently and I would consider the Anthem STR some of the best Class AB amplification that I've gotten my hands on in terms of overall performance regardless of MSRP. When you factor in the price, you see how Anthem has disrupted the market yet again with a product that doesn't just ask for consideration--it demands that you audition it.