Computer monitors have made great strides as high definition displays. Andrew Robinson wanted to see how great so he took the AOX i2353Ph LED IPS monitor in for review and put it to the test. 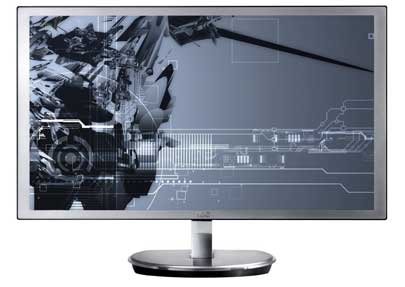 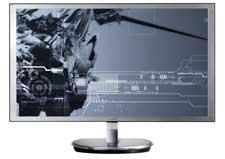 I’ve become increasingly interested in larger PC monitors as of late, first because my two Samsung monitors have started to fade, and second because, believe it or not, many PC monitors are actually better than current HDTVs. It’s true. Modern HDTVs from whichever manufacturer you choose are mostly going to be 1080p designs that boast 10-bit panels (though they may only accept eight-bit signals), capable of properly displaying the Rec. 709 color space and maybe a bit higher. Monitors, on the other hand, can be had in resolutions greater than 1080p, are often 16-bit or higher in terms of their color depth, and can display larger color spaces, such as RGB or even DCI. To top it off, many monitors are even more affordable than their HDTV counterparts, though they are at present not available in sizes much over 30 inches. But not every situation or installation calls for a 70-inch Sharp or a 120-inch front-projection setup. Sometimes, an inexpensive 23-to-30-inch display is ideal, which is how the AOC i2353Ph came to my attention.

The i2353Ph retails online for under $200, depending on where you look, which makes it among the cheaper (in terms of affordability) true IPS LED monitors you can buy today. The i2353Ph is, dare I say, sexy, clad in what appears to be a glossy brushed aluminum finish from top to bottom. I say “appears” because, upon closer inspection, the i2353Ph itself is clad entirely in plastic, meaning its brushed aluminum finish is more of a faux finish. This isn’t the end of the world, just something worth pointing out. Another item that becomes immediately apparent is that the i2353Ph’s 23-inch, 16:9 display is hard-mounted to its faux aluminum base. Most monitors nowadays allow you the ability to remove the monitor from its base or table stand to better facilitate wall-mounting; not so with the i2353Ph. It’s not that the i2353Ph can’t be wall-mounted; it can, but you’ll be forced to attach any third-party wall mount to the base, rather than to the back of the monitor. The other thing the base affords the i2353Ph is the ability to house its input options inside the base, as opposed to along the back of the display, which results in the i2353Ph having a much thinner form factor than other LED-based monitors on the market.

The i2353Ph measures 21.6 inches wide by 15.3 inches tall and a little over seven inches deep, thanks to its attached base and slight forward rake. It weighs a whopping five-and-a-half pounds out of the box, which isn’t confidence-inspiring, though it does make positioning and mounting easier. The HD display boasts a max resolution of 1920 x 1080, with a reported contrast ratio of 50 million to one (dynamic). Brightness is reported to be at 250 cd/m2, with response time coming in at 5ms. IPS displays boast accurate image quality from wider viewing angles than traditional LED or LCD displays; the i2353Ph claims a 178-degree viewing angle in all directions. Inputs include two HDCP-compliant HDMI inputs (auto sensing), analog RGB (15-pin, D-sub Male) and an analog audio input. The i2353Ph does have built-in stereo speakers, though they seem to be for emergency use only, as they’re small and frankly under-powered at only two watts.

Installing the i2353Ph is a breeze in both computing and home entertainment venues. I used the i2353Ph as both a PC monitor and a movie-watching monitor in a small bedroom-type system. As a PC monitor, the i2353Ph is pretty good. Text is sharp and images and websites appear clearer and more acutely rendered when compared to my older model LCD monitors. The i2353Ph boasts a group of image and picture adjustments, including basic CMS, though I doubt many users will dive into these,-instead opting for one of the AOC’s image presets, of which there are many. I’m not suggesting that one cannot dial the i2353Ph in and treat it as a reference monitor for, say, graphic design or photo editing, but at this price point, I don’t see many replacing their larger, higher-res Dell or even Apple Thunderbolt displays for an AOC i2353Ph. When using it as a computer monitor, I did notice that the i2353Ph’s light output and viewing angle is not as global as, for example, my LG IPS monitors. There is definitely edge light bleed along the lower edge of the screen when viewing sites and/or images that rely heavily on blacks. Also, the horizontal viewing angle appears to be close to manufacturer claims, but the vertical viewing angle is not.

When using the i2353Ph as a small HD display, things more or less stayed the same. I went ahead and utilized the i2353Ph’s movie image preset and disengaged all dynamic image functionality. The resulting image was very cinematic indeed and one that, honestly, I could totally live with in a non-critical viewing setup. Viewing angle was still a bit touchy and I didn’t like that the attached base didn’t provide me with a full range of motion in terms of monitor adjustment but, again, I’m nitpicking a bit. When I was viewing 2.35:1 material, the edge lighting did become more of a distraction. This isn’t an issue exclusive to the AOC – hell, Home Theater Review publisher Jerry Del Colliano’s 65-inch Samsung LED suffers from similar ailments. For a monitor or small HD display retailing for less than $200, I can forgive a little light leakage. Again, as a reference display, the i2353Ph doesn’t have the chops, but for casual viewing and/or online browsing, it’s pretty phenomenal. In terms of color, the i2353Ph isn’t going to be any richer or more defined than your everyday HDTV, which is a shame, but again, not uncommon at this price point. It’s not as if the monitor was somehow black and white or dull, it’s just on par with every other HD display or monitor I’ve seen. Contrast was good, darker regions of images were solid, with blacks appearing black, as opposed to some dark shade of purple as with some computer monitors or ultra-thin LED displays. Motion was smooth and digital artifacts were kept to a minimum. The internal speakers were a bit of a letdown, so I recommend not relying on them unless you have no other choice.

Read about the high points and low points of the AOC i2353Ph on Page 2. 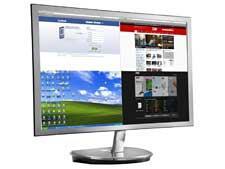 High Points
• Despite its plastic construction, the i2353Ph is
a looker, appearing far more high-end than its modest price tag would
have you believe.
• The i2353Ph is among the more affordable IPS
monitors available today. Throw in its HDCP-compliant HDMI inputs and
built-in speakers, and you have a very affordable small secondary HD
monitor for a bedroom or dorm system.
• The i2353Ph can pull double duty as both a PC (or Mac) monitor and a small HD display, thanks to its PC and HDMI inputs.
•
The i2353Ph’s image quality as a PC monitor is on par with most
affordable LCD, LED and IPS-style monitors. As a small home theater
display, it is capable of hanging with true HDTVs in its class, too.

Low Points
•
Despite it being an IPS monitor, the i2353Ph’s viewing angle is not as
universal as its manufacturer suggests. Its horizontal viewing angle is
far better than its vertical one.
• There is noticeable light bleed
from the i2353Ph’s LED edge lighting, which isn’t as apparent when using
the display as a PC monitor or when viewing 16:9 content, but it is
definitely a distraction when viewing 2.35:1 material.
• The i2353Ph’s internal speakers are pretty much no good for anything but low-level YouTube videos and/or quick audio samples.
• I would’ve liked a remote, though I can’t think of any PC monitors that offer one.

Competition and Comparison
We
don’t evaluate a lot of computer monitors here at Home Theater Review,
though this could be changing as markets and technology converge more
and more every day. Still, I can say that among its PC monitor
contemporaries, the i2353Ph matches up fairly well with other IPS
offerings from LG and even ASUS. In terms of absolutes, I believe the LG
and ASUS to be superior, but for the casual observer or user, the AOC
i2353Ph is more than adequate and represents a substantial savings over
the aforementioned brands. I do a lot of video and image editing, so I
don’t think I’ll be parting with my LG IPS monitors any time soon.
However, I could see the AOC setup in my wife’s office space as a
secondary monitor for her laptop. For more on HD monitors and HDTVs in
general, please visit Home Theater Review’s HDTV page.

Conclusion
I
requested the AOC i2353Ph 23-inch IPS monitor because I was interested
in seeing how the latest crop of affordable computer monitors stacked up
against some of today’s smaller HDTVs. The result was surprising, as I
found their performance to be very similar in many regards. In many
cases, you may even consider the AOC the winner, as it is also a solid
entry- to mid-level computer monitor, whereas many entry-level HDTVs
can’t really pull double duty, despite having the requisite connection
options. Is the i2353Ph the best monitor I’ve ever seen? No, not even
close, but I like it all the same. Its sub-$200 price tag, slick good
looks, ease of use and basic functionality make it a solid investment
for those looking for a new monitor or a small secondary or casual
viewing HDTV display.