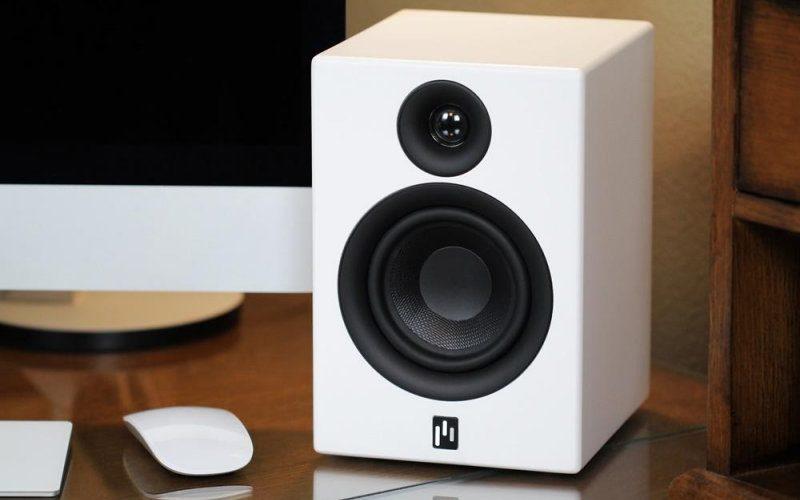 Gaming still gets a bad rap. For whatever reason, the stereotype of a puberty-stricken teenage boy sitting in a dark room still reigns supreme in the eyes of many non-gamers. And the further assumption is that those boys have no discernible taste in... well, anything really, including audio. But, in actuality, gamers represent all genders, skin colors, and ages. There may be some puberty-stricken teenage boys sitting in dark rooms, many of us have also grown into middle-age men. Sitting in dark rooms. And, goddammit, we want our games to sound good.

While playing on my home theater system, that's no problem at all. My NHT Classic Fours sound excellent, with an impressive soundstage, authoritative bass, and clean highs. But when I switch over to my computer, I'm in need of a smaller solution that still delivers great fidelity. Enter Aperion Audio's Allaire Bluetooth Bookshelf Gaming Speakers.

To keep retail costs low, Aperion has been a direct-to-consumer company since it was founded in the late '90s, but that doesn't mean they skimp on the hi-fi experience. I remember when the company visited the Home Theater Magazine test studio in the mid-aughts and brought along some Intimus speakers to show off. And even though the speakers arrived in a brown shipping box, as they would to any customer, the unboxing experience was still of tantamount importance. Once the cardboard was folded away, the solidly-built speakers emerged in purple velvet protective bags that spoke to the sort of attention to detail you might not expect from a mail-order company.

The Aperion Allaire speakers come draped in white cloth, not purple velvet, but Aperion's excellent build quality is still evident. They speakers are available in Stealth Black or Pure White, which I was sent for review. The white is actually quite striking, and a welcome change to the black boxes that usually adorn my computer desk.

Each speaker has a four-inch woven fiberglass woofer and one-inch silk dome tweeter, with a rear-facing port. They are driven by two 50-watt Class D internal amps. All connections are made on the back of the left speaker, where you'll find two input options – an optical PCM in and a 3.5mm analog in - along with a subwoofer output (RCA), binding posts to connect the right speaker, and a USB port that supplies power only (5V/250mA max). That's it. No boundary switches or EQ trim, no independent volume knob, no XLR or quarter-inch connections, and not even a power switch. It's a very no fuss, no muss design. You might notice the woofers are on the small side, but they still deliver a reported 60 Hz low frequency extension (-3dB). If you want deep bass, though, Aperion offers two packages that include either the Bravus II 8D or Bravus II 10D subwoofer. My review system came packed with the 8D, a 300-watt sub with a down-firing 8-inch aluminum driver and two side-firing 8-inch aluminum passive radiators. Knobs on the back allow you to adjust phase (variable from 0 to 180 degrees), crossover (from 40 to 160Hz), and volume level. There's a mono LFE, stereo line in, and stereo speaker-level binding post inputs. As with the bookshelf speakers, there's a USB power port, although the mA output max is 500 instead of 250. A toggle switch allows you to select to keep the sub always on or to turn on when it senses a signal, and next to the power switch is a voltage selector for either 115V or 230V.

The Allaire and Bravus II 8D bundle is available for $699. If you want a bit more oomph to the low end, there's a bundle for $999 that includes their Bravus II 10D instead of the 8D. You can also get the speaker pair alone for $399.

The silver aluminum remote control for the speaker system is surprisingly hefty for its size. Like the back of the Allaire, its layout is minimal and simple, with only six buttons: power, mute, volume up, volume down, Bluetooth pairing, and source. In fact, the remote is the only way to control any aspect of the Allaire speakers. If you misplace it (like I did, causing me to thoroughly clean my desk), the speakers become stylish paperweights.

I connected my computer with the optical cable and used my iPhone X as a Bluetooth source. Bluetooth pairing was incredibly easy: Just press the pairing button, select Aperion Allaire BT on your source, and change the source on the Allaire to Bluetooth. On the front of the left speaker are three LEDs (red, blue, and green) that indicate the three different sources (optical, Bluetooth, and 3.5mm, respectively). It took a few days for me to commit the optical and 3.5mm colors to memory, but the blue LED was obvious. When you turn off the power, the LED for whichever source is connected dims. There's no way to completely turn off the light, so if you're keeping the Allaire system in your bedroom, invest in some electrical tape.

I played around with the sub settings, finally settling on a crossover of around 120Hz. Any lower and there was too much of a frequency hole between the Allaire and the sub. I constantly tweaked volume depending on the content (a bit higher for games with low rumbles, a bit lower for most music), although it stayed relatively close to the one-o'clock position. The sub is small enough to fit under most desks, but I chose to place it next to mine against the wall so I had the extra leg space.

Since the Allaire combo is marketed as a gaming desktop speaker system, I of course immediately fired up my new multiplayer obsession, Deep Rock Galactic. As a team of space mining dwarves, you're on the hunt for minerals, cave plants, and fossils while keeping swarms of bugs at bay in the dark caves of an alien planet. There's a whole range of sounds constantly coming at you (especially when the swarm gets agitated). There's also ample thud and boom, giving the Bravus II 8D plenty to do. The Allaire speakers definitely sound voiced towards the high end, though. The metallic clang of pick-on-mineral cut through any other sound and verged on being too much at higher volumes.


Next, I turned my attention to one of my favorite musical releases of 2020: Fiona Apple's Fetch the Bolt Cutters. Her first album in eight years, it's an incredible raw and intimate invitation into Apple's life, exploring experiences ranging from her being outcast by a social group in middle school to the sexual assault of a friend, which also speaks to her own experiences. It has been a while since an album made me feel like I was in the room with the performer, but this one does just that.

The mix masterfully explores the soundscape – placing instruments, background noises such as barking dogs, and vocals all around – and the Allaire places everything with great accuracy. There's excellent depth to many of the found percussion sounds, coming from the back right of the room or over next to the piano, but Apple's vocals are able to stay the focal point and stand strong against the layers.

Some of this has to do with the mix, but much is due to the speakers' forward presence in the midrange, which gives Apple's voice a bit extra oomph and accentuates the raw emotion that peaks through. That presence can be heard from the very beginning in "I Want You To Love Me" with an emotional rasp that creeps in and adds a desperate plea.

There are times throughout the album, however, that the high-end voicing of the Allaire can be a bit fatiguing, especially with cymbal hits in songs like "Shameika."


The most direct comparison for the Aperion Allaire Bluetooth speakers is likely the Audioengine A5+. The Audioengine speakers are slightly larger (five-inch drivers as opposed to the Allaire's four-inch) and have a physical power button and volume knob, but they lack a digital audio input. A Bluetooth version of the A5+ costs $100 more than the Aperion, and Audioengine doesn't offer a speaker/subwoofer bundle available (although Amazon recommends pairing with Audioengine's S8 sub).

Overall the similarities are numerous. It really comes down to personal sonic preference. I like both sets quite a bit, although I'm not sure the Audioengine's advantages – namely the inclusion of physical adjustments – warrant an extra $100. The Aperion Allaire also comes with a generous 60-day in-home audition period, so there's really no reason to not try them out if you're looking for a new set of desktop speakers.


You might also consider the Kanto YU6 & SUB8, a favorite of our own Andrew Robinson. The YU6 pair sells for $399.99, with the SUB8 adding another $289.99, for a total of $689.98. One thing in particular that makes this combo stand out is its built-in MM phono stage. You can read more in Andrew's review.

Conclusion
The Aperion Allaire Bluetooth gaming speakers have obviously been made by people who care about sound and quality. They look great, are easy to set up, have a small footprint, have enough connection options (including a digital in) for a desktop setup. And they sound really good, especially with the sub bundle. If you're sensitive to higher frequencies, they might be a bit overbearing and fatiguing, but that extra sizzle is especially helpful when playing games that rely on directional sounds. And with the 60-day in-home demo offered by Aperion, it's easy to give them a whirl during this time of self-distancing.

Granted, the "gaming" aspect of the system is more marketing than anything else. When you get right down to it, this is just a really great set of desktop speakers with Bluetooth 4.0 and aptX support built in. But it's nice to see that at least one audiophile company doesn't consider gaming to be a frivolous teenage pursuit.

You'll automatically be entered in the HTR Sweepstakes, and get the hottest audio deals directly in your inbox.
Author
John Higgins
HomeTheaterReview Product Rating
Value:
Performance:
Overall Rating:
Check Product Price
When you buy through links on our site, we may earn an affiliate commission. Your support is greatly appreciated!