The Aperion Intimus 4T and 4C loudspeakers arrived at Sean Killebrew's house for review and he put the loudspeakers through a battery of tests to find out how they would perform while playing a wide variety of content. 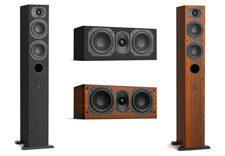 If you're researching speakers, you'll no doubt find plenty of positive reviews of Aperion's various speaker lines. They've won tons of awards and their business model is simple - create audiophile-grade audio components at an affordable price by dealing directly with their customers over the Internet. This is my second experience with Aperion speakers, my first being their 5T Intimus Hybrid HD 5.1 speaker system, which was a standout. Aperion speakers are proof positive that high-end sound can be affordable, though you don't have to take my word for it, as they offer a 30-day in-home trial with free shipping. The vibe on the Aperion website is cool and friendly, the same sort of experience you'll have if you contact their customer service. Their site is also great for accessories such as banana clips and speaker wire; the latter is well-constructed, affordable and currently being used for all of the surround sound speakers in my home theater.

The focuses of this review are the Intimus 4T tower speaker ($275/each) and matching Intimus 4C center channel ($130). Each speaker features a one-inch silk dome tweeter and dual four-inch woven-fiberglass woofers. Each of the speakers has a small footprint, with the tower speakers measuring 34 inches high by five inches wide, seven-and-a-half inches deep and weighing 19 pounds each. The 4C center channel measures just over five inches high by 12.8 inches wide by five-and-a-half inches deep; it weighs eight pounds. The available finishes are gloss black, black ash and cherry, a simulated wood grain vinyl that is aesthetically pleasing, especially considering the price point. The review samples came in cherry and blended quite nicely into my listening room.

The Intimus 4T has a reported frequency response of 60Hz to 20kHz (plus or minus three dB), with an impedance of six ohms and a sensitivity of 88dB, making it an ideal candidate for today's modern AV receivers, even lower-priced ones with modest power output. According to Aperion's website, the Intimus 4T sounds best when powered by as few as 25 watts, though it can handle up to 150 if you've got it. Conversely, the 4C has a reported frequency response of 78-20kHz into eight ohms with an 86dB sensitivity rating. The 4C is obviously voiced to match the 4T, as well as all of the other loudspeakers in the Intimus lineup.

The Hookup
The packaging on the Intimus line is typical of Aperion, which is to say exemplary. Each speaker comes wrapped in a velvet bag - think of opening a bottle of Crown Royal and you'll get the idea. It's nice to see that the packaging remains consistent, even at the lower price points in the Aperion line. The 4T towers come with feet that need to be attached and they're pretty pedestrian in terms of look and feel, but they get the job done.

I connected the speakers to my current reference system, which consists of the Cary Cinema 12a processor, an Integra DTA-70.1 seven-channel amp, a Music Hall MMF 2.2 turntable, an Oppo BDP-93 Blu-ray player, a Cambridge Audio DacMagic and a Music Fidelity V-Link USB to S/PDIF converter. All of the cabling came courtesy of WireWorld. In terms of positioning, I placed the 4C center channel just below my projection screen. The 4T towers were placed about 11 feet apart in the front of the room, with just a slight amount of toe-in toward my listening position. During break-in, I experimented quite a bit in order to get the speakers to disappear, which they eventually did.

Performance
After a bit of break-in time, I began with some two-channel music in the form of Jack Johnson's "Taylor" from the CD On and On (Universal Music). The first thing that struck me was the low-level resolution, which was rock-solid, especially given the size of the 4T towers. By the way, I'm not sure "tower" is the right word for these speakers. They're more like "morsels," but I digress.

Read more about the performance of the Aperion Intimus speakers on Page 2.

I'm often disappointed with the low-end performance of many floor-standing speakers, even some of those with larger cabinets and drivers that should be capable of decent bass. As I made my way through other forms of music and movies, that's the aspect of the 4T's performance that continued to blow me away - the bass that those little four-inch drivers were capable of dishing out was amazing.

It was time to up the ante, so I booted up The Black Eyed Peas' "I Gotta Feeling" from their CD The E.N.D. (Interscope). Despite the speakers' size, they imaged well and didn't break a sweat when pushed. Again, the low-frequency response was exemplary and belied the size of the woofers. It's safe to say that I was a bit surprised by their ability to bring this track to life, but they remained consistent on music such as hip hop, reggae and anything else with plenty of low-end thump.

Continuing with two-channel music, I cued up Sade's "Haunt Me" from her album Stronger Than Pride. I was floored by how well the 4Ts conveyed the sensuality in Sade's voice, as well as the detail in the instrumentation. Even at low volume, the level of detail was impressive. Female vocals can be a bit tricky for a loudspeaker to reproduce accurately, so they're a great way to test the versatility of a given speaker and the 4T towers proved themselves more than capable.

Moving on from CD to vinyl, I popped Fleetwood Mac's Tango in the Night (Warner Brothers) onto my turntable and found myself transfixed by Stevie Nicks' voice on "Little Lies." Her haunting rasp was palpable and I ended up playing this one a couple of times. The Aperions didn't take away any of the natural warmth and richness that accompanies vinyl and really surprised me with their performance, especially given their level of affordability. They also weren't overly picky about source material, which is to say that some speakers only truly shine with high-res audio, some with vinyl, etc. But these little guys were up to the task, regardless of whether I was playing a lossy MP3 or high-res audio.

Was I neglecting the 4C center channel? In a word, yes. However, this is a testament to the performance of the 4Ts. Anyway, it was time to throw in one of my favorite test Blu-rays, Quantum of Solace (MGM). The opening scene delivers a ton of lossless audio information to all 5.1 channels, so it's a great way to test how well a given speaker system can dance across the frequency spectrum. The high-frequency screech of Bond's Aston Martin being ripped apart was engaging, without being etched. The sound of multi-caliber gunfire was visceral and well-rendered. Despite their diminutive size, the 4Ts and 4C center channel were pretty convincing in terms of recreating the movie theater experience at home.

Next up for viewing was the Blu-ray of Marvel Studio's Thor (Paramount) , which turned out to be a visceral experience. Despite the ever-present action in the film, the 4C center channel did a capable job of conveying dialogue with solid resolution. That said, unless you simply don't give a rat's ass about bass, you're going to want to add a subwoofer for watching movies. If it's a small to mid-sized room, you can certainly get away with a smaller, less expensive sub and still keep your budget in check. Aperion subs actually pack quite a bit of punch for their size and price, with the most affordable being their Bravus 8A powered sub, which retails for $299.

My last test involved the DVD-Audio version of Steely Dan's Two Against Nature (Giant Records/WEA). On the track "Jack of Speed," I found the vocals to be warm, neutral and engaging. I didn't notice any unwanted sonic artifacts, something that can prove difficult at this price point. I kept trying to pinpoint the sonic characteristic I found most appealing in the Aperions and really wasn't able to do so. I mean that in a good way, as they're well-rounded and well-engineered, especially given their affordability. Keep in mind that they're designed for smaller rooms and that's where they'll shine. If you follow Aperion's lead on their website, they'll guide you in the right direction in this regard. The Downside
Compared to some speakers I've recently reviewed, the soundstage on the Aperions was a bit narrow, but that's to be expected at this price point. In terms of placement, you'll need to experiment a bit to get them to disappear, but once that's done, you'll be rewarded in spades.

Despite what I've said about the Aperions' low-end performance, most people are going to want to bring a subwoofer to this party. Also, as I've already mentioned, if you have a large listening room, you might want to climb the ladder a bit in terms of Aperion's speaker line.

Competition and Comparison
There are a couple of players worth considering at this price point. The first that comes to mind is PSB, specifically the PSB Alpha B1 bookshelf speaker and matching Alpha C1center channel, which retail for $299 and $249 per pair, respectively. The PSBs are standout speakers, especially when mated with the proper source components. Another manufacturer known for their price to performance ratio is Wharfedale. If you have a bit more in your budget, you might consider their Diamond series. Although the tower/center combination I reviewed here runs about $1,500, the Diamond line is also comprised of more affordable speakers, such as the well reviewed Diamond 10.1. Another manufacturer worth noting is Epos, although some of their more affordable speakers, such as the ELS-3, have been replaced of late with more expensive speakers. I think maybe their positive reviews have gone to their head.

Conclusion
Affordable high-end gear is becoming less and less elusive. Consumers have more power than ever before to research not only the opinions of experts, but also regular Joes who have bought the gear and graciously take the time to share their experience online. This helps keep the manufacturers honest, in more ways than one. They now have to build better speakers and charge less to be competitive (not all of them, mind you). If you read The Aperion Story on their website, you'll realize that their business was born partly from this philosophy. As such, Aperions are well-engineered speakers that are aggressively and accurately priced.

Speaking specifically of the Intimus 4T and 4C, they possess a well-balanced, neutral character that I find highly appealing. While I did enjoy watching movies with the Aperions, I must say that I preferred their performance on music. That's not to say they're not versatile speakers, I'm just pointing out my preference and where I think they shine most.

Considering Aperion's 30-day audition policy and the attractive price point of the Intimus line, there's really no excuse not to give them a try; you'll be rewarded with high-end sound and solid engineering. If your room is on the larger side, check out Aperion's pre-configured systems, which are categorized by room size. The beauty of Aperion's business model is that you can audition several speaker packages if necessary ... and it won't cost you a dime. They truly offer something for everyone and don't take themselves too seriously.