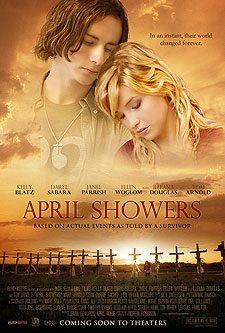 April Showers, the drama about the Columbine tragedy written and directed by Andrew Robinson and produced by HomeTheaterReview.com's publisher/editor Jerry Del Colliano, will be available both theatrically and on iTune-compatible devices within the same week.

Today is a big day for April Showers, my first movie as an executive producer. Cinco de Mayo is not only my anniversary with my lovely wife, but this year, it is also the day April Showers goes live on Apple's iTunes. This is the second time any feature film has given the computer company with a big group of fans, who watch movies on iPods, iPhones, Mac computers, PCs and Apple TV wireless devices, access to a full movie this close to its theatrical debut. The move comes with some controversy, especially among traditional theater owners who are truly fearful about the future of their venues and worried about how they can sell more $11 tubs of popcorn.

When people talk about movies, they stereotypically talk about "box office sales," but more and more movies make very little in theaters unless they are what are called "wide releases" and include bankable stars. Think Julia Roberts, George Clooney, Brad Pitt, Will Smith and the like. These major stars go wide on 1,500-plus screens, meaning that on any opening Friday for Oceans 19, or whatever new blockbuster is out, pretty much anybody living near a cineplex can see said film near their home. National ads support the film. Late-night talk shows support the PR. You know the drill.

For independent movies, going wide might mean something different these days. The costs of releasing a film to theaters at all are often prohibitive. This means the direct to DVD phenomenon for smaller movies can be very profitable for the right project. April Showers was in 18 theaters nationwide last week and carried over in a handful for a second week, which is pretty strong for a self-distributed indie film, but our definition of "going wide" is in our distribution via Apple iTunes more than our reach in a few handfuls of theaters nationwide.

Reportedly, Apple Computer has upwards of 1,500,000 regular customers (and growing) who have bought a movie once via iTunes. They have customers all over the world and millions of possible places and platforms to sell a movie with a no-disc, home video model. They have an email list of indie-friendly movie buyers who represent more possible buyers for a very well-produced film about the aftermath and effects of a modern-day school shootings directed by a young survivor of Columbine. This is our definition of going wide.

Time will tell if the April Showers download bet will pay off, but we are excited and optimistic. The reason the producers of the movie, including myself, are truly enthusiastic is the way that traditional movie exhibitors treated April Showers in some cities. They were open and overt about not putting April Showers in their theaters if we were to look to Apple as a partner so quickly. Note: these decisions were made by local movie cineplex companies when the producers on April Showers had agreed to donate a large portion of the first week's box office take to local schools with no strings attached to help promote awareness and safety in schools. Even with a healthy portion of the movie going to local schools, in cities like Milwaukee and even Denver, home of Columbine and where the community is quite interested in the topic and the film, people were denied seeing April Showers in 2k or 4k on the big screen.

Today that changes, thanks to Apple.

If you are interested to see what April Showers is about, simply visit http://www.apple.com/trailers/independent/aprilshowers/ and you can download the movie. If it's your first time downloading a movie (as it was for me using iTunes), it's pretty easy and takes no time. If you have an iTunes account, then you know what a breeze it is.

We can't wait to hear from you on what you think of the film. Does it look indie to you (most think it looks pretty polished)? What do you think of Tom Arnold's performance? Same with Daryl Sabara. What do you think about April Showers going wide on iTunes over theaters? Feel free to post comments below.

You'll automatically be entered in the HTR Sweepstakes, and get the hottest audio deals directly in your inbox.
Subscribe
Connect withD
Login
Connect withD
0 Comments
Inline Feedbacks
View all comments
Author
Jerry Del Colliano
This is the static ad content. This is just a placeholder for now to get things styled.
Visit Website