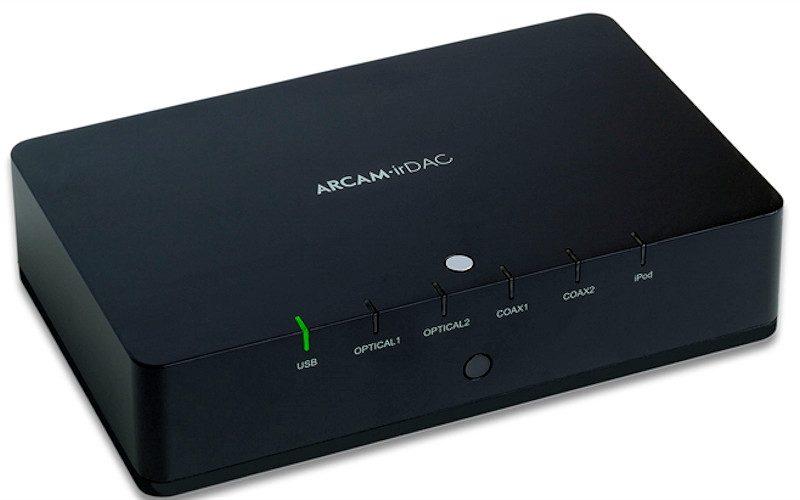 Certain names in the audio industry tend to excite, especially when they arrive at your door. Arcam is one such name, and my experiences with their products, both through reviews as well as demos, has been exceedingly positive. As such,...

Certain names in the audio industry tend to excite, especially when they arrive at your door. Arcam is one such name, and my experiences with their products, both through reviews as well as demos, has been exceedingly positive. As such, when the irDAC ($700) arrived, I didn't waste much time in firing it up.

Technically speaking, the irDAC features a Burr-Brown 1796 DAC and is 24-bit/192-kHz capable. Jitter is said to be "vanishingly" low, thanks to a Wolfson WM8805 digital interface transceiver, which is trickle-down technology from Arcam's FMJ reference line and is active on all six of the irDAC's digital inputs. Further pushing the boundary in terms of ensuring a clean signal path, the irDAC features individually regulated power supplies.

In terms of connectivity, none of your devices will be left untethered, as the Arcam includes two coaxial inputs, two optical inputs, one asynchronous Type-B USB input (with a switch for Class I or II), and one Type-A USB input for iPhones/iPads that also charges the device. One set of RCA analog outputs and a coaxial digital output are onboard.

The irDAC is an attractive, somewhat unassuming unit made of anti-vibration aluminum and featuring a rubber base. There is but one input-switching button on the top of the unit, and the lack of button clutter is a welcome design element. The IR remote includes all the features you need while managing to maintain a minimalist design.

So how does it sound, and is it worth $700? The answers are simple and straightforward. The sound is refined and exciting in a way that leads you to believe the hyperbole put forth, not only by Arcam but by other reviewers as well. In terms of a direct comparison with my Cambridge Audio DacMagic, I found the irDAC to be punchier, more in your face, and generally more sonically pleasing. I connected the irDAC to my reference system using the coaxial input and began playback through my Squeezebox Touch. In listening to Stephen Marley's "Now I Know" from his album Revelation Part 1: The Root of Life (Republic), the rasp and beautiful subtlety in his voice was conveyed with stunning realism. In the interest of testing the irDAC's mettle on hi-res material, I connected my MacBook Pro via the USB input and played the 24/96 version of Jason Mraz's "5/6" from his album Love Is a Four Letter Word (Atlantic). I found the midrange to have more energy and the vocals to be a bit more forward, when compared with my Cambridge DAC. Overall, there was a palpable increase in the level of transparency. Sticking with 24/96 hi-res, I cued "Madness" from the Muse album The 2nd Law (Warner Brothers). In my notes, I described the soundstage as "epic" and took note of the guitar solo at the 2:40 mark of the track, which was raw and conveyed all you'd want in a well-recorded hi-res track. Put simply, the music was more visceral when listening to the irDAC. Is it worth $700? If you consider the sonic performance of your DAC to be its most important feature, and you probably should, then the answer is a resounding yes.

High Points
• The irDAC offers exceptional sound quality at its price point and arguably above.
• This $700 DAC uses trickle-down design elements from Arcam's reference line.
• The irDAC is not overly picky in terms of the resolution of the source material. It sounded great with a wide variety of sources.
• The DAC has six digital inputs, including asynchronous USB.

Low Points
• The irDAC lacks networking and streaming capability like some other DACs out there today.
• The DAC lacks balanced XLR outputs for those running such systems.
• While not a deal-breaker, it's nice to have a display showing the resolution of the track you're playing.

Comparison and Competition
While I would give the edge in sound quality to the irDAC, the aforementioned Cambridge DacMagic is a solid performer in its own right and can now be had, in its more updated DacMagic Plus configuration, for an affordable $500. Move up a bit in terms of price point, and you'll find another of my favorite names in audio: the NAD D 7050 features network capability and streaming (AirPlay/Bluetooth) for $1,000. If you have a bit more discretionary income and are looking for added flexibility in terms of having a DAC and Blu-ray in one unit, the Oppo BDP-105, with its SABRE32 Reference Audio DAC and $1,200 price tag, is worth your time.

Conclusion
In terms of performance, this unit is likely everything you'd want in a DAC under $1,000. It will breathe life into your music collection. While network streaming isn't possible, it's not exactly a reach to have a friend connect their phone to the dedicated input, thereby gaining the technical and sonic prowess of the irDAC without the loss of precious resolution that is the byproduct of streaming. My point is, a DAC is meant to convert your music to analog and make it sound great; it's not supposed to make you an omelet. On that front, Arcam's irDAC is a raging success.

It's also worth noting that the irDAC will reward you if you take care in system matching--in other words, pairing it with the highest quality gear you can afford, while also paying attention to the sonic signature of each component. While my reference system is comprised of an amp/processor combo that retails for $7,000, the $700 irDAC was not in over its head, so to speak. The irDAC proved to be a worthy companion in my high-end setup and should be a welcome addition to just about any real-world home audio system.

Additional Resources
• Visit the Arcam brand page at HomeTheaterReview.com.
• Get more details on the irDAC at Arcam's website.

You'll automatically be entered in the HTR Sweepstakes, and get the hottest audio deals directly in your inbox.
Subscribe
Connect withD
Login
Connect withD
0 Comments
Inline Feedbacks
View all comments
Author
Sean Killebrew
HomeTheaterReview Product Rating
Value:
Performance:
Overall Rating:
This is the static ad content. This is just a placeholder for now to get things styled.
Visit Website