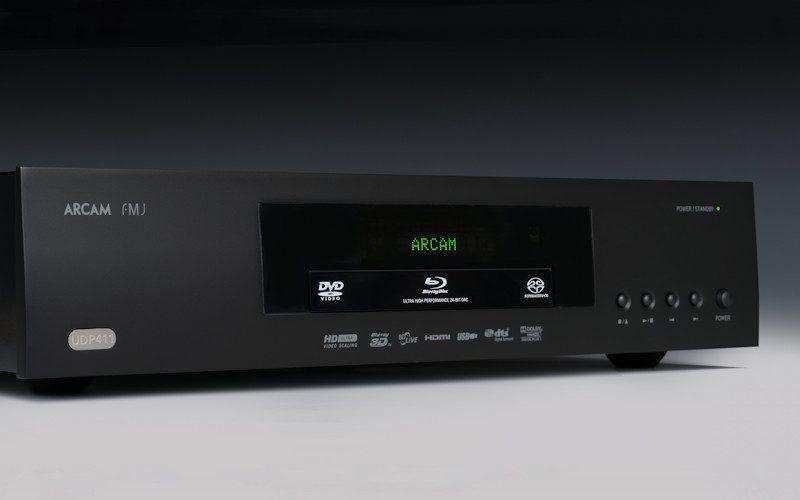 Following up on his review of the Arcam AVR750 AV receiver, Dennis Burger now explores the company's UDP411 universal disc player, which (like the receiver) has an audiophile emphasis and a unique sound. 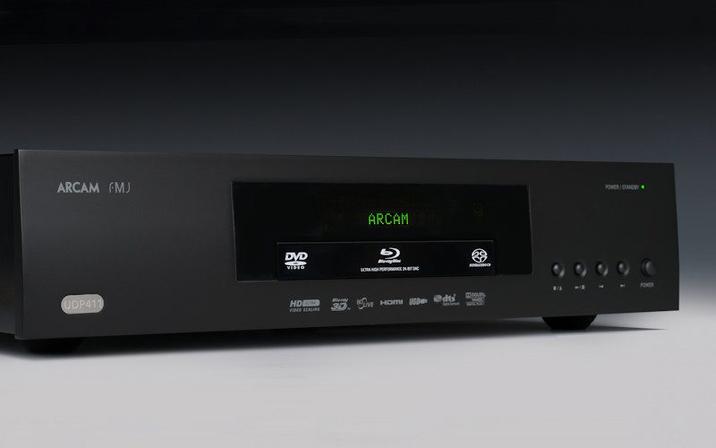 Here's the thing I need to get off my chest right from the giddy-up about my philosophy as an electronics reviewer. More often than not, when evaluating a new piece of gear, I'm not really looking at it through my own eyes (or listening through my own ears, but oddly that makes for a weirder metaphor). Instead, I try to get into the headspace of a prospective buyer for said component and give him or her as much information as he or she needs to make an informed buying decision, whether I would buy it for myself or not.

All of that is simply to say that, if you balk at the notion of a $2,000 Blu-ray player, this review isn't aimed in your general direction anymore than it is mine. In fact, if you're at all inclined to think of Arcam's UDP411 universal disc player first and foremost as a Blu-ray player, I think you're approaching it from entirely the wrong direction. It makes much more sense, at least from where I sit, to think of the UDP411 as an audiophile-caliber CD/SACD and streaming music player that just so happens to have Blu-ray playback and 4K upscaling capabilities, rather than to look at it the other way around.

Pure pedantry? Perhaps. But I think that viewing the UDP411 first and foremost as a music player puts the entire design of the unit in the proper perspective. After all, it boasts XLR and RCA analog stereo outputs (although, sadly, no multichannel analog outs), backed by a mature but very highly regarded TI/Burr Brown PCM1794 DAC, a linear phase Bessel output filter, an advanced re-clocking system, and discrete power supplies for the drive, DAC, and audio boards.

All of that truly bears out in the listening...well, when you go the analog route, at any rate. Connected via HDMI, the sound generated by the UDP411 is largely determined by the receiver--in my case, I mated it with Arcam's own exquisite-sounding AVR750. A switch to the analog outputs does change the sound a tad...for the better, in my opinion. It's slightly more airy and open, more detailed, more nuanced. But I need to be clear here that comparing the sound generated by the two setups is an exercise in hair-splitting.

I felt that I got a better frame of reference for the UDP411's audio performance when separating it from the AVR750 briefly for some testing in my two-channel system in the home office, via the auxiliary analog input of Peachtree Audio's Nova220SE integrated amp. Here, the UDP411 became more of a variable, especially when compared with other CD/SACD source components (like my trusty old Denon DVD-2900). The differences here were much less subtle, although definitely in the same vein: the sound coming out of the UDP411 was appreciably clearer, less obscured, and more engaging in every way. In particular, I was bowled over by the player's performance with Compact Discs. Your mileage may vary, of course; but, in my experience, the better the DAC, the less audible difference there is between Red Book audio and high-resolution tunes, if any. Via the UDP411, I struggled hard to tell the difference between my CD and SACD copies of Steely Dan's Gaucho (MCA), and I often failed. The same cannot be said of lesser players.

That, combined with the new Arcam MusicLife app (which unfortunately made its debut after I had finished my review of the AVR750), makes the UDP411 one amazingly compelling music source. See the High Points section for more details on MusicLife.

While I certainly wouldn't call the video side of the UDP411 an afterthought by any means, you can really tell that music was Arcam's primary concern here. Not in terms of pure performance, mind you; its output with Blu-ray discs is pretty much perfect, and the player also does a silky smooth job of upscaling DVDs (to 1080p in my case, although the player also has 4K upscaling capabilities that I wasn't equipped to test).

That said, the player does lack some features that are considered pretty much standard these days, like onboard storage for BD-Live content. It's arguable, of course, whether BD-Live is a feature worth worrying about. And I'm not here to make a pronouncement on one side or the other of that argument. What's annoying, though, is that if you don't plug your own provided flash drive into the back of the UDP411, you're reminded of the fact that you don't have BD-Live storage every time you load a disc. Thankfully, you can disable BD-Live in the setup menus to avoid seeing such pop-up messages.

Likewise, the player lacks any sort of video apps. No Netflix. No Amazon Instant Video. Nothing of the sort. So you'll have to rely on your satellite box, TV, or separate media player for access to those services. Although, interestingly, if you dig around in the sparse My Media folder, you will find a link to vTuner Internet radio and a real Web browser, of all things.

High Points
• The Arcam UDP411 is a world-class CD, SACD, and networking streaming audio player that also just so happens to deliver excellent video performance for Blu-ray discs and DVDs.
• Build quality is exquisite, and the player is supported by discrete IR, IP, and RS-232 codes for integration with advanced control/automation systems
• The box also comes with an included antenna for WiFi connectivity, if you can't or don't want to go the wired Ethernet route.
• Unlike other high-end, non-mainstream players I've tinkered with, I didn't run across any Blu-ray discs that the UDP411 wouldn't play.
• Compatibility with the Arcam MusicLife app puts the player's local streaming-music capabilities on a different level altogether from most of its competition. MusicLife is a gorgeous and intuitive app that not only allows you to stream music from your network, iPhone, or iPad to supported Arcam devices, but it also lets you stream files from your computer or NAS drive to your phone.

Low Points
• Unfortunately, MusicLife still needs a little work. It crashes frequently.
• Although it does play SACDs, the UDP411 fails to fully live up to its "universal" nomenclature due to the lack of DVD-Audio support. Also, multichannel DSD is delivered over HDMI as PCM, even if you select the Bitstream output option in the setup menu.
• The lack of streaming audio and video apps may be a concern for some buyers who don't have any other way of accessing Netflix, Tidal, Spotify, and the like.
• The lack of multichannel analog audio outputs is a head-scratcher, given the player's audiophile design and price.
While many viewers probably turn off BD-Live altogether and won't be bothered by the lack of internal storage for such, it's still a little odd to see a player at this point that requires the user to plug in his or her own USB memory stick to enjoy the feature.

Comparison and Competition
Given the dominance of Oppo in the Blu-ray player market, it's no surprise that the UDP411 doesn't have a large number of contenders in its price range. The $2,000 Pioneer BDP-88FD Elite Blu-ray player comes to mind as an obvious competitor, though. Like the Arcam, the Pioneer player features heavy emphasis on audio quality and a dearth of AV apps. It does feature YouTube and Picasa, though, for what it's worth. The BDP-88FD, unlike the UDP411, does support DVD-Audio playback, and it features dual HDMI outputs, which the UDP411 doesn't. Whereas the Arcam relies on the TI/Burr Brown PCM1794, the Pioneer uses ESS's ES9018 SABRE32 Reference DAC chip. Both, though, feature excellent power supply sections and analog circuitry, which for my money has more of an effect on sound quality than the DAC chip itself.

In my opinion, the most serious competition that Arcam faces is in the form of Oppo's $1,299 BDP-105D, which features the same ESS SABRE32 Reference Audiophile DAC chip as the Pioneer, just implemented a bit differently as I understand it. The BDP-105D features balanced XLR stereo outputs, but also 7.1-channel analog RCA outputs. It also delivers the DVD-Audio playback that Arcam's player lacks, along with a good number of streaming apps, as well as support for a multitude more thanks to its Roku-ready front-panel MHL-capable HDMI port.

Conclusion
The simple fact of the matter is that, as I stated above, if you look at Arcam's UDP411 as a Blu-ray player first and foremost, it doesn't really stack up all that well against cheaper options that deliver equal video performance (and equal audio performance via HDMI), along with a host of streaming video and audio apps and other connectivity benefits to boot.

Also, the lack of DVD-Audio playback did hurt the UDP411's overall Performance rating. Chances are reasonably good that, if you have enough SACDs kicking around your domicile to warrant purchasing a capable player, you've also got at least a DVD-Audio or three sitting on your media shelves. Without DVD-Audio support, the UDP411 doesn't really earn its "universal" moniker.

View the UDP411 as an ultra high-performance CD player with SACD and streaming media capabilities, though, and its Blu-ray capabilities just sort of seem like icing. I say that because, much like Arcam's AVR750 receiver, I've never heard anything that sounded exactly like it. So, if you love that Arcam sound and don't mind missing out on some features and convenience, it's well worth an audition at your local Arcam dealership.