Are Silver Discs Deader Than a Dodo?

Are Silver Discs Deader Than a Dodo?

Nah, it's just restin'. Stunned even. Probably pining for the fjords. 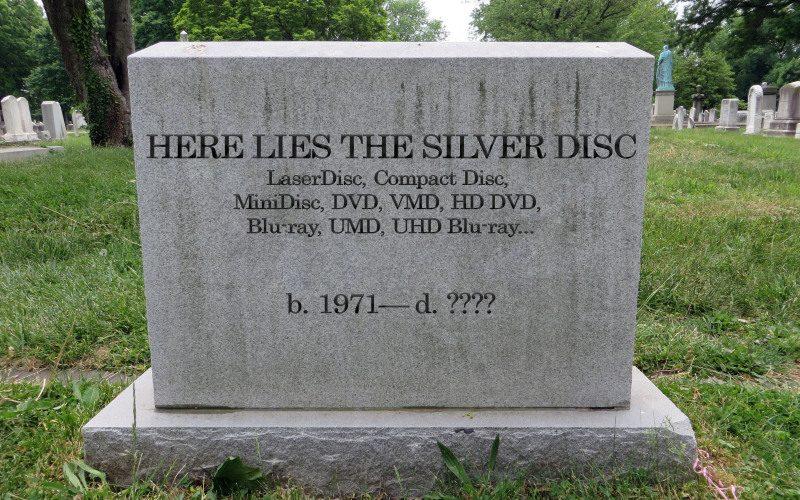 Is it time to cart off the optical disc to the old formats retirement village? Please, say it isn't so.

Clearly, these are not the best of times for fans and collectors of silvery, laser-read optical discs, as consumers rush ever more enthusiastically into the arms of online streaming services that offer a month's worth of unlimited listening or viewing pleasure for about the same price as one hard packaged title.

In its late June earnings call, Barnes & Noble CEO Demos Parneros (since fired) shared that Fiscal Year 2018 music and video disc sales (ending April 28) were down again by double digit percentages. Barnes & Noble was working "as quickly as we can" to reduce CD and DVD floor space, he said. Just as Best Buy, Walmart, and Target have done in the past few months, with special ruthlessness shown to audio Compact Discs--now on death watch a mere 36 years after the format's birth.

On the hardware side, serious AV fans have been wearing black arm bands over the recent shuttering of Oppo Digital, maker of high quality, reasonably affordable "universal" silver disc players. And while CD players used to be standard in new cars "at least three car makers I know of

– most notably Cadillac--now make it an optional, gotta-pay-extra-thing," said Ted Cardenas, VP of Marketing, Car Electronics Division at Pioneer Electronics during a recent chat at CE Week in New York. But for his customers who're souping up an older or entry-level new ride, "90 percent still buy a Pioneer head-unit with an optical drive. Since we make all the components, adding the player only adds $10 to $30 to the retail cost." And there are "literally billions of CDs sitting on consumers shelves," Cardenas added--a remark we've also heard from Como Audio chief Tom DeVesto in support of his brand's recently introduced $599 Musica. It's a sweetheart of a compact system that combines streaming services with a legacy CD transport.

Adding insult to CD's injury? The resurgence of interest in retro-music formats--most notably vinyl, but also cassettes--has been posited by devotees and the media as an anti-optical disc phenom, reviving old arguments of analog vinyl albums sounding better than flimsy little digital CDs. But in truth, the added "warmth" of vinyl (like the bubbly, big daddy boom of Wurlitzer jukeboxes), is largely a post-production thing, a by-product of the RIAA equalizing curve imposed in vinyl mastering, which overcompensates for the inability of needle-in-groove systems to accurately track deep bass or serve up more than 65 dBs of dynamic range. And to relish that nostalgic listening experience, you now get to invest $20-25 for the vinyl version of an album that sells for $12-$15 in more durable and deeper tracking CD form (and with a free bonus stream download if you buy it from Amazon, the prime seller of CDs these days.)

Yes, big print lyrics and credits and large-scale artwork on vinyl albums are more enjoyable. So's the old-school pleasure (for some) of rolling a joint on the cardboard LP cover. Plus, you get to participate in the process by working the tone arm and flipping over the album halfway through--the forced intermission and user engagement that artists once actively planned their projects around.

For all the talk about vinyl's comeback, its upward trajectory still represents less than 20 percent of physical album sales in the U.S. a year, noted Nielsen in its report of first-half 2018 music business numbers. And while profits are much higher per platter, vinyl can't make up for the continuing plunge in purchases of all hard goods. Physical album sales in the States fell another 14.6 percent year-on-year to 41.3 million for the first half of 2018, of which vinyl LP sales comprised 7.6 million, up 19.2 percent. The real winner, though, has been music streams, up 41.6 percent in the first half to 403.4 billion, of which 268.2 billion were on audio platforms and 135.2 billion were on video platforms.

Still, CDs aren't going away anytime soon, Universal Music Group's global catalogue business president and CE Bruce Resnikoff recently told the Los Angeles Times . "Make no mistake, streaming will continue to grow and become even more central to how fans discover and listen to music. At the same time, CDs and vinyl remain a significant part of our business and will be around for a very long time ... Our industry is global and CDs remain an important way for people to buy music in some of the world's biggest markets like Japan, Germany and France."

When cornered, artists privately admit to me that they hear "more of the studio" (room acoustics and instrument spatiality) in their CD playbacks than they do in the vinyl renderings but are happy to hawk both varieties at shows. And now sometimes cassettes, too (Jack White, Taylor Swift, Jay-Z, and Lana Del Ray have released recent albums on tape). Only in the mighty hip hop music realm do you find major artists releasing material strictly in stream/download-only fashion.

Here's another telling irony. Paying extra bucks each month for the HD high resolution version of Tidal and Deezer streaming services grants you access to better, lossless encoded (like FLAC or MQA) content that's billed as "CD quality." So even these new rivals have to acknowledge what's still the gold standard for sonic accuracy in most listeners minds. (Arguably, higher bit rate, higher sampling frequency SACD, DVD-Audio and Blu-ray Audio discs are better still, but now exceedingly hard to come by except as imports or in special edition box sets.)

Honestly, "good" streaming sound clocked at 192 to 320 kbps is pleasing enough for the majority of today's multitasking half-listeners, especially when played in earphones on the go (where the music is diluted by the world's ambient sounds) or through multi-room streaming speakers from Sonos, Bose SoundTouch, Como Audio, etc. that have their reproduction rights limited by small cabinet enclosures, relatively low power amps, and modest sized drivers.

And for me, streaming services like Amazon, Napster, and Deezer really earn value as music curators/consultants, by pushing a customized list of new releases and catalogue items that they've intuited I'd like based on past searches/requests. Whilst tone-deaf Apple Music relentlessly courts the youth market, these other services actively get this music lovin' Boomer, send up a flare when a Dawes or Ray Davies, Kamasi Washington, or Buddy Guy has a new album out.

On the video side, I'd argue that premium tier Netflix and Amazon Prime Instant Video HD and 4K Ultra-HD streams are likewise quite presentable. Now sometimes packing HDR-10 and Dolby Vision dynamic range enhancements, the streams look pretty damn sweet on my 65-inch LG OLED screen, almost as detailed as the 4K video disc content I'm pumping to the same display with my Oppo player (hang in there, buddy), just so long as I sit more than nine feet back from the screen.

Here the limitations of a packed down (to 15 Mbps) streaming 4K Netflix show become more obvious, relative to the uncompressed detailing of 4K imagery possible from a top drawer Ultra HD Blu-ray demo disc like Stephen Spielberg VR stunner Ready Player One, the shot-for-IMAX National Parks Adventure, and BBC's magical aquarium Blue Planet II, or from favorite 4K BR reference discs like Sicario, Deadpool, and The Revenant. All flying at the screen at maybe 30, 50, or even 85 Mbps.

On the near horizon, one more bump up in AV performance might give the optical disc another death row reprieve. We're talking 8K "Super Hi-Vision" video now being ramped up by Japanese public broadcaster NHK, with a picture resolution of 7680x4320 and a maximum 22.4 multi-channel sound system. All that extra data that the 8K standard demands (184 Mbps) will be a bandwidth buster for conventional cable and satellite services (Japan's NHK will deliver it via a special satellite feed.) That leaves the hard goods purveyors with something new and exclusive to peddle. At least for a while.

In the end, you will likely need one more disc player even if you're renting most of your UHD and SHV movies until the ultimate Internet "pipe" that Mark Cuban dreams about grows big enough to swallow this digital whale. Some have said gigabit Internet today but not all of us, and without it, you are hard pressed to get the same streaming AV performance that you can get from the best a silver disc has to offer today. It won't be long until there are no silver discs left but that day is not upon us. Not yet.

You'll automatically be entered in the HTR Sweepstakes, and get the hottest audio deals directly in your inbox.
Author
Jonathan Takiff
When you buy through links on our site, we may earn an affiliate commission. Your support is greatly appreciated!