Ken Kessler might not be as into American audio but with it comes to Italian tube anything - you can catch his attention. This Armonia Integrated amp is on the more affordable side of audio obscurity for the US market but it has the sexy lines that we all like from Italian audio, cars and other exports... 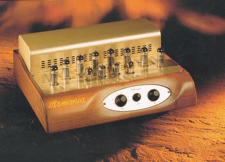 Back in March '98, I reviewed an Italian integrated valve amp I'd been lusting for at many a hi-fi show. My lust was, of course, driven by my Italophilia, but that was only a small part of it: the amplifier beguiled me with its near-kitsch styling, straight out of the guide which inspired the Triumph TR-3 and the Parker 51 fountain pen. It didn't disappoint, but I suppose that £2900 for Nightingale's luscious ADM-30 was enough to put off those who craved what sounded to me like a latter-day Radford STA-25.

Not only has the lira plummeted since '98*, Nightingale has also made a concerted effort to grace a lower-priced integrated with as much of the ADM-30's charms as possible...including the positively sybaritic wood which marks the brand. What they've done is clever indeed, for the Armonia - the amp which featured in the controversial ads with the Q-tip - is still Class A, still fitted with a phono section and still dressed to kill. Alas, the review sample arrived in gold, instead of the lilac I saw a year back in Milan and Las Vegas, but enough of being in touch with my feminine side: whatever colour you opt for (and lilac

So what's changed? For starters, the 6L6s which gave the ADM-30 its 30W/ch output have been replaced with eight EL84s, with two E88CCs for the preamp and two E82CCs as the phase inverters. No complaints here, as the '84 is my favourite 'economy' tube, a sweet little beauty which I think of as being to an EL34 what Baby Spice is to Pamela Anderson. Gone, too, is the front-accessed phono socketry and flip-up; on the Armonia, the sockets are placed at the back. The tactile, black Bakelite knobs with finger notches have been replaced with more conventional black domes with a tiny dot to indicate position. Er, that's it.

Read more about the Armonia amp on Page 2.

No other concessions appear to have been made, even if the Armonia is described as 'stereo' while the ADM-30 is regarded as 'dual mono'. It has four line inputs, a tape loop, and a damned fine phono stage for separate mm and mc inputs, which is actually more flexible than the ADM-30's; via crappy DIP switches at the back (yup, the same nasties I criticised Roksan for using), you can select 47k or 68k ohm impedance, and capacitance of 47, 100 or 220pF. And although this isn't touted as dual mono, the back has everything mirror-imaged, including separate left-and-right banks for DIP switches for the phono section and separate left-and-right earthing posts. All of the phono sockets are gilded, and there are two pairs of three Michell-style binding posts to allow selection of 4 or 8 ohm impedance.

Where you notice the reduction from ADM-30-level performance, though, is in the power, however much we've been taught that the difference between 20W/ch and 30W/ch is negligible. Absolute

Just as the ADM-30 sounded vintage, so, too, does the Armonia evoke the past. The sound is warm and a tad hazy, more Leak than Radford. In fact, this unit is so Leak-like that I pulled out a Stereo 20 and, sure enough, it was like acknowledging the resemblance between Ingrid Bergman and Isabella Rossellini. 'Doh!', you're thinking - is Kessler that slow-witted? Of course, I know that they share EL84s. But I wasn't expecting them to sound

Which is great news if you're of the Leak rather than Quad or Radford persuasion, and have given up on finding a Stereo 20 which hasn't been butchered. Where Armonia betters a Leak pairing is in the quietness of the pre-amp stage, the Varislope preamps never ringing my bells for precision or background silence. (Once a Radford man...) So don't misread my emphasis on the retro-sonics of the Armonia: it's as modern as it needs to be, handling CD with aplomb and even adding some euphonic sweetening of its own. But the real thrill is with phono, so match this up to a medium-output mc and you're looking at something bordering on the heavenly...provided you don't expect solid-state hygiene.

It's quite obvious that Nightingale, in creating a budget version of the ADM-30, opted for musicality over everything else. You can listen to Armonia all day, provided you don't overwork it. I suppose that it will mate well with horns, but I just can't bring myself to sully my studio with the damned things. (I do, however, admit to a serious passion for pre-1980 Lowthers...) But let's put it another way, given that UK denizens wanting an Armonia will have to indulge in self-importation: if you're the sort who would, in this day and age, run a pre-FIAT Lancia or Alfa, then this sucker has your name on it.