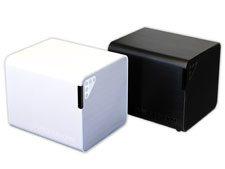 Artison has launched a Kickstarter campaign to raise funds to complete development of the minuscule RCC Nano 1 subwoofer that the company showed off back at CEDIA. The Kickstarter campaign is now active, and contributors have an opportunity to win an RCC Nano 1 at a highly discounted price, as well as a VIP two-day trip to Lake Tahoe.

From Artison
Artison, a leading designer of advanced, eclectic loudspeakers for home entertainment systems, has announced a Kickstarter campaign to complete its first-ever freestanding subwoofer in over 10 years, the RCC Nano 1, a small sub with performance that is comparable to full size versions. The campaign will support the final stages of product development and give home theater fans and music lovers an opportunity to be among the first to purchase the revolutionary subwoofer - and at a significant savings.

The Nano 1 Kickstarter campaign is live as of October 23rd, with videos about the product, program and benefits. Artison's Kickstarter page is here. Contributor benefits include an opportunity to own a Nano 1 for $399, which represents a 60 percent discount off the suggested retail price, in addition to a top-shelf opportunity for a VIP two-day trip for two to Lake Tahoe that includes lunch with legendary speaker designer Cary Christie, luxury accommodations at a hotel on the lake, and a two-day ski pass.

Artison's Nano 1 - Massive Output from a Miniscule Enclosure
Artison displayed a functioning Nano 1 prototype at the CEDIA Expo 2014 in September and received exceptionally positive feedback from attendees and the press. The freestanding subwoofer is the smallest truly high-performance subwoofer in the world. It is designed to pack a powerful, high-quality bass range into a small, unobtrusive cube that can accompany virtually any high-end audio and home entertainment system in nearly every décor imaginable.

Measuring only 7.5" x 8" x 9" including feet and grilles, this compact 300-watt powerhouse has the piston area of an oversized 8" woofer. Constructed of 6061 T6 Aluminum, the Nano 1's enclosure is both rigid and thin, which are both highly desirable subwoofer characteristics.

The Nano 1 incorporates Artison's industry-leading reactance cancelling configuration (vibration-free) design, which ensures not only frequency response, increased efficiency and discernibly lower distortion, but also secure placement - crucial in a freestanding speaker. Outfitted with variable crossovers and dual active 6.5" long throw aluminum drivers, it is an ideal choice for delivering omni-directional low-frequency sound waves in any room or zone, regardless of placement.

Artison plans to ship the Nano 1 to early Kickstarter contributors in January '15, and to late supporters in March 2015. It will be available to the general public in January, as well. The MAP will be $899, though Kickstarter supporters will receive varying discounts depending on their level of participation. A compatible wireless transmitter will also be available for $99 MAP.