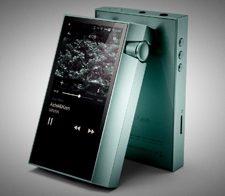 At last week’s CE Week event in New York, Astell&Kern showed off two new products: a new portable hi-res audio player called the AK70 (shown here, $599) and an updated second-gen version of the AK T8iE in-ear monitors ($999). The AK70 is the first in Astell&Kern’s portable lineup to include a digital line output via optical and USB, so users can connect their own external DAC. The second-generation AK T8iE, designed in partnership with Beyerdynamic, updates the previous, award-winning IEM with an new cable design. Both products will be available in July.

The Astell&Kern AK70 is the latest portable high-resolution audio player in the Astell&Kern lineup. A new entry-level portable hi-res player, the single DAC AK70 is the first Astell&Kern portable player to feature a digital line out via optical and USB. This allows users a range of options to connect their own favorite external DAC.

Other features of the Astell&Kern AK300 include:
• Single Cirrus Logic CS4398 DAC Chipset
• Support for high-resolution audio playback up to 24-bit/192-kHz PCM audio and up to double-rate, 5.6MHz DSD (converted to PCM)
• 64 GB internal flash storage with single microSD card slot for up to 200 GB of additional storage memory
• DLNA 1.0 Compatible
• Wi-Fi enabled, supports OTA firmware updates and streaming music from other devices on the same network
• Supports AK Connect app, available for iOS and Android devices
• USB DAC function – can be connected to a Mac/PC to bypass internal sound card and output hi-res audio
• CD-Ripper compatible, allowing the user to rip music directly to the player without the need for a computer.

Just as important as sound quality is comfort. The AK T8iE features a concha design with the cable running over the ear, which has several advantages. On the one hand, a somewhat larger housing is necessary to accommodate the 11mm Tesla driver inside. On the other hand, the oval-shaped concha molds sit very comfortably in the ear without any pressure. They are easily inserted, instead of pressing them forcefully into the ear canal. And because the cable doesn’t pull, they can’t fall out. The cable is covered with Aramid, a strong and heat-resistant synthetic fiber, for high durability that will stand up to long-term use. The earbud itself is made of a proprietary composite with a three layer PVD coating and contains copper and chrome.

The AK T8iE features two cables, the first with a balanced, 2.5mm four-pole jack for use with Astell&Kern players. Also included is a second cable with 3.5mm jack for use with other portable players. Five different sizes of these unique silicone tips are included, as well as foam tips in S, M and L.

Astell&Kern engineers worked closely with Beyerdynamic to tune the sound output of each IEM to perfectly match the sound characteristics of Astell&Kern’s portable high-resolution audio players. Every pair of IEMs are built by hand at the Beyerdynamic facility in Heilbronn, Germany, to Beyerdynamic’s exacting specifications.

The Astell&Kern AK T8iE second generation In-Ear Monitor is $999 and will be available in July 2016.