Using Atlantic Technology's Directional Vector Control (Vector... Victor - as they say in Airplane) these IWCB in-wall speakers have the power of an ICBM. Compare with some of the best in-wall speakers from Paradigm, PSB, Sonance and Niles Audio. 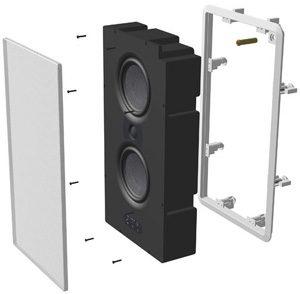 As sound travels, it "falls off" or lobes in its journey to the listener's ear. This effect is even more apparent with in-wall speakers, as they are usually mounted further away from the listener's ear, resulting in a slightly muffled sound. Atlantic Technology's IWCB in-wall speakers combat this issue through the use of their DVC (Directional Vector Control) technology, which essentially adjusts for lobing and allows you to electronically aim the sound at your listening position.

Additional Resources
• Learn more about Atlantic Technologies from HomeTheaterReview.com.
• Read Other High End in-wall speaker reviews from the likes of Noble Fidelity, SpeakerCraft, Sonance, B&W, Paradigm and many others.

Because of DVC, the IWCB speakers can also be placed in positions on your wall that you wouldn't normally consider when installing in-walls, for instance, above or below seated at ear height, which allows for a myriad of installation possibilities. IWCB Series comes in three sizes, depending on your needs and room. The smallest, the IWCB-52, having a single one-inch soft dome tweeter mated to a five-and-one-quarter-inch midrange/bass driver. The largest IWCB-626 features the same one-inch tweeter, but mates it to dual midrange/bass drivers. The middle child of the line mates the one-inch tweeter to a slightly larger midrange/bass driver. I should also point out that all of the IWCB in-walls are internally crossed over, so that the upper midrange is handled by the tweeter, more or less creating a point source sound, which is rare among in-wall speakers, yet highly addictive once heard. All of the IWCB in-wall speakers are a sealed enclosure design, which cuts down on sound being lost or wasted in your wall cavities and are among the best-constructed in-walls I've encountered in their price class.

High Points
• The Atlantic Technology IWCB in-wall speakers boast an attractive finish, with paintable speaker grilles allow for a more upscale appearance and installation.
• The speakers are truly solid and are easy to install, compared to many other in-wall speakers that can leave you pulling your hair out if you are a DIY home theater or home automation enthusiast.
• These speakers can be placed above or below the seated position and still produce surprisingly good stereo imaging.
• The sound quality of the Atlantic Technology IWCB in-wall speakers rivals costlier in-walls, especially for multi-channel music and movies.
• These in-walls can easily be driven to reference levels with most modern receivers.

Read about the low points of the IWCB on Page 2.

Low Points
• They aren't the most "musical" speakers for two-channel, audiophile listening. It takes a much larger investment in in-wall speakers to start to get that level of performance.
• The highs can get edgy at ultra-high levels.
• Not as much of a low point as a suggestion: the very good speed of the speaker is well-suited to be matched with a comparably quick subwoofer.
• The binding posts can be a bit tricky and small for some brands of speaker cable, but once it's installed, you never will deal with that issue again.

Conclusion
While all in-walls are an exercise in compromise, the IWCB series from Atlantic Technology gets more of the equation right than most in-wall speakers I've encountered. I've heard more musically engaging in-walls in the extreme price category, but none that rock a Dolby Digital or DTS soundtrack quite the way the IWCBs do. For an in-wall-based home theater system, the IWCB must be on your audition list. Do not miss out.

Additional Resources
• Learn more about Atlantic Technologies from HomeTheaterReview.com.
• Read Other High End in-wall speaker reviews from the likes of Noble Fidelity, SpeakerCraft, Sonance, B&W, Paradigm and many others.