Audeze has announced its first trio of in-ear monitors, all of which use planar magnetic technology and incorporate elements from the company's premium LCD Collection. All three models also include a Lightning cable to deliver a pure digital signal to... 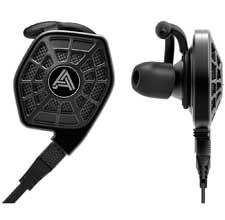 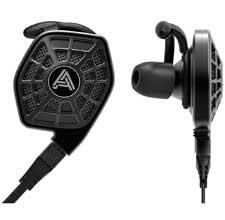 Audeze has announced its first trio of in-ear monitors, all of which use planar magnetic technology and incorporate elements from the company’s premium LCD Collection. All three models also include a Lightning cable to deliver a pure digital signal to iPhones, iPods, and iPads. The entry-level iSINE 10 ($399, shown here) is an easy-to-drive model with a 16-ohm impedance that’s designed for use with a variety of portable players. The step-up $599 iSINE 20 ($599) has a 24-ohm impedance and a longer voice coil, while the top-shelf LCD i3 ($2,495) uses the same nano-grade film as Audeze’s $4,000 LCD-4 headphone. The new in-ear monitors will ship in October.

From Audeze
Audeze launches its first series of in-ear headphones. They incorporate all the technology of the rave-reviewed LCD Collection, including patented Fluxor magnets, ultra-thin diaphragms and patented Uniforce voice-coil technology. The three new models range in price from just $399 to $2,495. All models include Audeze’s Lightning cable for Apple’s iPhone/iPod/iPad.

As one of the first in-ear planar magnetic headphones, the iSINE Series raises the bar for audiophile sound quality with lower distortion, superior bass response (flat to 10 Hz!), and a wider soundstage than any other in-ear in its price category. Designed and assembled at Audeze’s California factory, they worked closely with strategic partner Designworks, a BMW Group Company.

Every part of the iSINE is designed to bring our world-renowned Audeze sound to a global market in a smaller, lighter package. Perfect for all portable devices, the $399 iSINE 10 is easy to drive with an impedance of 16 ohms. It includes both a Lightning cable and a premium analog audio cable with 3.5mm stereo plug. The $599 iSINE 20 features a longer voice coil and at 24 ohms impedance, along with other improvements, delivers higher resolution and more detail than the iSINE 10. The $2,495 LCD i3 features the same nano-grade film as Audeze’s $4,000 LCD-4 headphone along with other premium materials.

All three models include Audeze’s Apple MFI-certified CIPHER Lightning cable that takes digital audio directly from your iOS device and uses its own built-in DAC and amplifier for superior audio and improved voice call quality.

“It’s an avant-garde design without a care for the status quo, these in-ear planar magnetic headphones rewrite the rules in every respect. We’re really proud of this groundbreaking work, another example of how we push headphone innovation to the limit,” said CEO Sankar Thiagasamudram.

The new headphones ship in October and can be pre-ordered today at www.audeze.com and Audeze retailers.