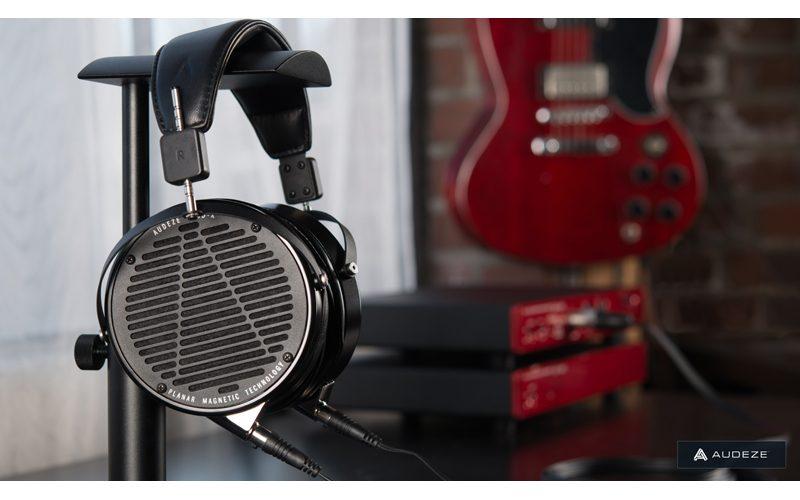 Headphone junkies are likely already familiar with Audeze. Less than 10 years since the company's inception, California-based Audeze has taken the high-end headphone world by storm with its LCD Series of planar magnetic headphones. Audeze products have gained widespread use... 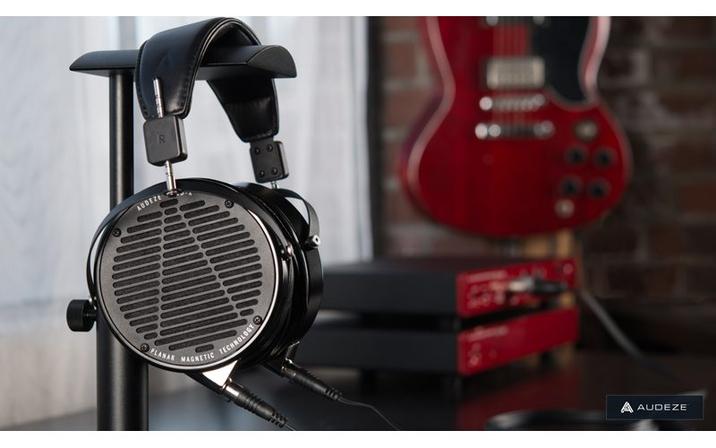 Headphone junkies are likely already familiar with Audeze. Less than 10 years since the company's inception, California-based Audeze has taken the high-end headphone world by storm with its LCD Series of planar magnetic headphones. Audeze products have gained widespread use by professionals and consumers throughout the audio world.

There are three types of headphone driver: moving coil (or dynamic), electrostatic, and planar magnetic. Moving coil is the most common, but only a handful of companies manufacture planar magnetic. At its core, planar magnetic is a specialized and unique technology, but it is not altogether different than traditional diaphragm transducers--in that both technologies utilize magnets to move a diaphragm. However, with planar magnetic technology, the diaphragm is a thin film, and larger, usually heavier magnets located on both sides of the film exert an even force across the film to create sound. In contrast, traditional transducers utilize magnets on one side of the diaphragm, and sound is emitted around the center of the diaphragm, which (like in traditional speakers) is cone-shaped. The LCD-X ($1,699) is an over-the-ear, open-back headphone that comes in black, with black aluminum rings and either lambskin or Microsuede ear pads. The headphones come packaged in a plastic flight case about the size of a large lunchbox, and several cables and connectors are included--for quarter-inch, 3.5mm, and balanced inputs. I weighed the LCD-X at one pound, 6.2 ounces, which is relatively heavy for over-the-ear headphones but consistent with other planar models. Overall construction is incredibly sturdy, and I found the LCD-X to be amazingly comfortable despite the weight. Several of my listening sessions lasted well over an hour, and one session took place during a five-plus-hour flight from New York City to Los Angeles, in which I wanted to test the LCD-X's portability (more on this later). In all that time, I readjusted or fidgeted with them very little.

The LCD-X is different than other models in the LCD Series--such as the LCD-2 ($995) and LCD-3 ($1,945)--because it was designed to be more efficient. Audeze reports the LCD-X as being 103-dB efficient versus the LCD-2 at 101 dB and the LCD-3 at 102 dB. The LCD-X, therefore, can be driven by lower power amplifiers, including those found in portable devices. During my tests, I sometimes used the state-of-the-art Pass Labs HPA-1 headphone amplifier ($3,500), but I also connected the headphones directly to my MacBook Pro and iPhone to listen to TIDAL Hi-Fi. With the Pass amplifier, I also utilized a Bricasti M1SE DAC (review forthcoming).

Despite being recorded in 1959, Jimmy Smith's The Sermon (Blue Note 4011, 24/192, TIDAL) was a thrill to listen to in the recently released MQA format. The Bricasti M1 DAC converts 24/192 MQA as 24/96, yet this did not detract whatsoever from my listening enjoyment. Art Blakey's drums, Eddie McFadden's guitar, Jimmy Smith's Hammond organ, and Lee Morgan's trumpet were all presented with excellent space and tonality through the Audeze LCD-X. Instrument placement in many recordings from this era (and notably those by Rudy Van Gelder) is almost entirely in either the left or right channel. With the LCD-X, it was even easy to hear some faint crosstalk in the upper frequencies, such as cymbals and horns, from each instrument in the opposing channel. This is less of an audiophile complaint than an observation on the detail and resolution one can hear with such excellent headphones on vintage recordings.

Rick Wakeman performed a piano arrangement of Life on Mars shortly after David Bowie's death in January 2016 on BBC Radio. The release received a huge positive response, particularly in an online video that received over two million views and sparked the idea for Wakeman to record Piano Portraits (Universal Music Group, 44.1, TIDAL), which was released a year later. Piano Portraits includes some new original material, as well as songs that Wakeman recorded with YES and material he played on as a sessions musician. The recording is modern and of extremely high quality, begging for a high-resolution release. The piano, particularly as a solo instrument, is an excellent choice to test a headphone like the LCD-X, with its wide octave range and deep bottom end, usually around 27 Hz. I could hear every nuance of the Steinway Model D concert grand piano that Wakeman played on this album, and when I closed my eyes I almost had to pinch myself as a reminder that I was not in the studio listening to Wakeman play live. Every track (including "Wonderous Stories," "Eleanor Rigby," "Space Oddity," and "Help") all possessed this live quality to a degree that is extremely difficult to replicate in any listening environment other than a live venue.

One of the greatest albums of all time is Stevie Wonder's Innervisions (Tamla, 24/96, TIDAL). If you thought Wonder was solely a talented singer, songwriter, and keyboard player, consider that he plays nearly all the instruments on this timeless Motown masterpiece. On "All in Love Is Fair," Stevie Wonder's voice seemed to float in the soundstage, with every breath and note evident in his voice. The bottom end on the TONTO synthesizer and Moog bass on "Higher Ground" through the LCD-X was deep, powerful, and smooth, never muddy or bloated even down to the very lowest frequencies.

I ended my listening session with Black Sabbath's Paranoid (Warner, 24/96, MQA, TIDAL). The high-resolution version of Paranoid is one of the best releases I have heard to date. Geezer Butler's bass guitar and Bill Ward's kick drum have more punch than in previous releases, and this was especially true listening through the Audeze LCD-X on "Iron Man" and "Hand of Doom." Instrument separation was top-notch, with Ozzy's vocals placed front and center in a soundstage that was wide and transparent on all tracks. Tony Iommi's monster, tube-driven guitar tone sounded natural, possessing the smooth distortion that has made amateur and professional guitarists jealous for generations. It was hard to find much if any sonic flaw with Paranoid, beyond obvious limitations of aged source material. The metal gods would definitely smile.

High Points
• The Audeze LCD-X sounds silky smooth and neutral across the entire frequency spectrum, including beautifully rendered, deep bass that will WOW your ears.
• The LCD-X's soundstage is open, transparent, and natural. You will hear subtleties in your music like never before.
• These headphones are extremely comfortable.
• The LCD-X is built fantastically well and will provide years of serious listening enjoyment.

Low Points
• Being compatible with portable devices does not by definition make the LCD-X friendly for being out and about. The size and weight of these headphones make them cumbersome, and their open-back design also makes them highly susceptible to ambient noise.
• Audeze does not include a lightning cable adaptor for the iPhone.
• Despite being a little more efficient than other models in the LCD Series, the LCD-X is still best-mated with a high-quality headphone amp and DAC. iPads and iPhones don't really possess adequate amplification to maximize this headphone's potential. Even the latest generation of high-resolution portable audio devices from Astell & Kern and Sony, which I demoed at CanJam New York City in February--as amazing as they are--still fall a bit short in exploiting the LCD-X's ultimate potential.

Comparison and Competition
The headphone market is incredibly large and fragmented, with a plethora of headphone types and manufacturers. If you are shopping for a new pair of headphones, first you will have to decide if over-the-ear open back, over-the-ear closed back, on-ear open back, on-ear closed back, wireless, in-ear, or even noise cancelling headphones are right for you. If you decide that an over-the-ear open-back design is for you, then you will have to decide between the Audeze LCD-X ($1,699) other Audeze models that are similarly priced, as well as other competitors in the market--like the Oppo PM-1 ($1,099), Mr. Speakers ETHER ($1,499) or ETHER Flow (1,799), and Hi-FiMan Edition X V2 ($1,299).

Over-the-ear models that employ more traditional drivers and which are best sellers in audiophile circles include the Sennheiser HD 800 S ($1,699) and Grado GS2000e Statement Series ($1,395).

Conclusion
The Audeze LCD-X headphones are a performance marvel. They sound amazingly spacious, transparent, accurate, fast, detailed, and downright intoxicating. Go listen at your local retailer and prepare to be seduced into buying a pair of your own. Great headphones eliminate interference from flawed room acoustics (yes, we all have them), allowing music to be heard exactly as the artists, producers, and recording engineers intended. The LCD-X delivers on this promise and then some, especially when driven by a dedicated high-quality amplifier and used with high-resolution source material. This is definitely the LCD-X's ideal use case, since this headphone will almost always underperform to its potential when paired solely with portable devices. This is because portable devices, at any cost, lack high-quality amplifiers and digital-to-analog converters. Also, as an open-back headphone, the LCD-X is really meant to be enjoyed in quiet listening conditions, not high-ambient noise environments on the go and outside the home. But at home, under ideal listening conditions, the LCD-X is an absolute winner.