Big tubes are the name of the game with the Conquest Amp from Audio Note. It's British-built, and even though its only rated at 18 watts per, it has some amazing performance as we find out in our full review here. 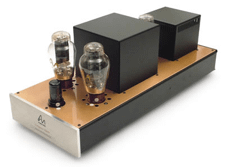 Heh, heh...I can picture at least half of you going, "Oh, no - here come more toys with prices courtesy of L. Frank Baum." Close, but no (Monte Cristo) cigar: there are

This new 'entry level' series is an attempt to provide 'proper' Audio Note performance for an audience other than the one consisting of oil shieks, Russian mafiosi and lottery winners. And while it probably galls Peter Qvortrop to sell something for less than ten grand, he

What's immediately apparent is the house style which differentiates between UK product and the dearer Japanese stuff. While Gaku-On, On-Gaku and the rest of the Eastern wares feature stunning construction, exquisite front panels that look like they were crafted in Schaffhausen and styling which causes palpitations in

Note that I'm talking about Audio Note's rabid supporters, not their employees. And to Audio Note's credit, I have every reason to believe that private customers are be treated like pampered reviewers. Why this sudden bout of what seems like sheer naivete? Because I know what kind of mileage Qvortrop and David Spiers put on their cars in a year.

Since it was Spiers rather than Qvortrop who delivered the Conquests, I was spared hours of audio propaganda, snide cracks about my failure to understand sound because I don't use horns or Snells, aspersions about my manhood because I own amps capable of more than 25W/channel. No tales of ten-nines silver wire, hand-rolled against the thighs of virgins in Papua, no stories about octogenarian craftsmen hand-winding the transformers, no cockeyed world view about the price of silver-versus-copper. That's because Spiers is to Qvortrop what Van Helsing was to Dracula, and his impenetrable Scottish accent betrays a sense of down-to-earth realism. Indeed, he sounds like he comes from good, bargain-hunting stock, and stopped just short of calling me 'Laddie'. His description was succinct.

Read more about the Conquest on Page 2.

'Basically, the Audio Note Conquest Compact Amplifier is a straight-forward, almost directly-coupled single-ended triode amplifier. No mysteries, no bullshit. Half of the 6SN7 double triode serves as the input tube, while the other is the driver. The two 300Bs in true singled-ended configuration, in parallel, rectified by the 5U4G. Er, that's it.'

Each chassis measures 180x200x500mm (HWD), in what seems to be the now-standard format for single-ended triode monoblocks: long and narrow and just right for placing alongside a big horn system or a pseudo-Snell. Me? I drove vintage Quad ESLs, LS3/5As, Wilson WATT/Puppy System V and any other speakers I could muster which anger the worshippers of SET. And that's where the Conquests present the most wonderful of contradictions: they don't

True, they're rated at only 18W each, but they act like 50 watters. I was absolutely astonished by the levels they allowed the WATT/Puppies to deliver, with no sign of clipping, no trace of susceptibility to the System V's weird impedance characteristics. And with the old ESLs, whew - it was a match made in, well, Canterbury. I was stunned, and that's putting it mildly.

As middle age makes me less and less tolerant, I find myself swearing by a regimen of music, most which bears the alarming common trait of having been recorded in the valve era. And it's this material, mono chart hits from the Fifties, which favours the single-ended triode. Is it less demanding? Frequency limited, Softer and less aggressive than digital recordings? I haven't a clue. But There was no mistaking the utter synergy created by feeding Tennessee Ernie Ford's 'Sixteen Tons' or the Chordettes' 'Mr Sandman' into the Audio Notes. These amplifiers caress vocals, they convey all of the warmth and, well,

It's like this: the Conquests are classic s.e.t.s if by that description you mean or simply expect a lush, sweet midband like no other, compromised by deep but wildly uncontrollable bass and a top-end that veers from the dull to the bright depending on the ambient temperature in the room, how you cast your rune stones and whether or not there's an 'R' in the day of the week. It's this unpredictability which plays no small part in making s.e.t.s so exciting, so much of a godsend for the no-lifers who embrace the technology. And I have to admit that the mid-band is something truly special, particularly when it's used to complement mid-band champions like Quad ESLs and LS3/5As.

An inescapable reason why those two classic transducers are actually better to use with s.e.t.s than the prescribed horns or pseudo-Snells is their behaviour at the frequency extremes. As neither speaker is endowed with much capability down into double-figure Hertzes, and as their upper frequencies are far from what you'd deem compression-driver-like, they act almost as complementary filters to the Conquests. It's only when I turned to the WATT/Puppies that I was faced yet again with that waffly 300B bass. Which kinda makes me wonder if '300B' is the preferred bra size of s.e.t. users.

None of which stopped me loving the Conquests, in the way that Todd Browning loved his freaks. Accompanying the peerless midband is rock-solid image placement, transparency of an uncommonly high order (but confined to the midband), and far greater speed that you'd ever credit a farty old tube like the 300B. And while the Conquests will not impress even slightly the Onga-Ku or Gaku-On veteran, they will steal sales from lesser s.e.t.s costing up to eight grand a pair. Why? Because, politicking aside, they make

Yes, I really am sorry to see them go. But just don't tell Peter Qvortrop...