Tired of buying houses? Bored with your three yachts? Privet jet just not doing it for you? Then check out the Gaku-On monoblock amp from Audio Note, which slides in just over $200,000. Each. One of the most famous amps ever in audiophile history.
Twitter5FacebookEmailFlipboard3PinterestPocketReddit
8
SHARES 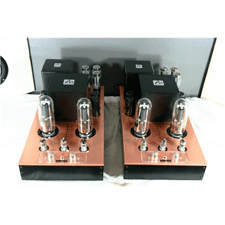 Think about a nice little cottage, straight out of Lovejoy. Maybe a shiny Ferrari. School fees for you child’s entire pre-university education. Any of the above is available to you if you have a spare £128,000.

Or you could buy a pair of Audio Note Gaku-On monoblock power amplifiers.

Yes: £128,000. Unless I’m ill-informed, the Gaku-On is the most expensive amplifier in the world. And for this kind of money, it should transport you to realms hitherto inaccessible outside of a live performance. It should also restore your hair if you’re bald, add tens of points to your IQ. Heal the sick, restore sight to the blind.

Like most of you, I thought this was some kind of joke, an over-the-top piss-take. But never underestimate Peter Quortrop, a man so able to convince himself of the worth of his own claims that he will spend hours justifying this, this, this

Sorry, make that £128, 125. ludicrous — there is no other word for it –attack on the concept of ‘value for money’. To wit: Quortrop argues that the Gaku-On’s price is due to the rarity of the main valves (two original, circa-oo 845s per channel), the 1200 man-hours needed to make each pair of amplifiers, including 500 hours for each transformer, the fact that the company makes only one pair per year and the high content of pure silver — all wiring, transformers, etc. To which I would counter that wages must be phenomenally high in Japan and that pure silver is worth slightly less per ounce than good chopped liver; I have some very large, mint 1920s sterling silver wristawatches which would scrap for about £10 each.

Then PQ replies with his cachet/objets d’art pitch. You’re asked to think about one-off fashions from names like Ozbek and Versace and Miyake. Bespoke furniture and jewellery. Big-name architect-designed homes. He suggests that he’s merely applying haute monde/ haute couture practices and techniques to hi-fi — something which all would agree that hi-fi lacks. But are there audiophile sin the world who are that desperate to own an amp merely because it’s a near-one-off, something they won’t see in any shops or other audiophiles’ homes?

For your eighth-of-a-million pounds, you get a brace of copper-clad monoblocks sprouting the aforementioned 845s, whacking-great phalluses which are classified as ‘direct-heated true triodes with bright emitters’, which means that they almost light up the room. They’re air force-grade tubes, designed to be used as transmitters in bombers. Each amplifier also uses a 5687 driver tube and a pair of 6072A tubes for input and phase-splitting, the latter tubes described as ‘super ECC83s with lower gain’.

Tango makes the mains transformers to Audio Note specifications, while the output transformers are in-house products. The core material is described as ‘ceramic leaf’, said to cost £1500 each, while each uses ‘£3000 worth of 99.99% silver wire’. This magical material is specially drawn and coated, then wound around the core under microscope in a special pattern. Everything else in the amplifier — admitted to be based on a venerable, simple, classic circuit — is hard-wired with silver solder.

The direct-heated triodes provide these amplifiers with 45W each of pure Class A power. No feedback whatsoever is used. Other designer goodies contributing to the six-figure sticker price include pure copper chassis, non-magnetic tantalum film resistors, hand-made silver foil resistors and a choke power supply employing Cerafine electrolytic caps throughout. At the back are decent binding posts for bare wire or bananas, while the front contains a rotary on-off switch and a level control, which means that you can feed this with a line source straight in if you don’t mind using volume controls which could be spaced quite a few feet apart in certain installations.

That said, the Gaku-Ons look rather ordinary. Well-finished but hardly an inidcator of wealth, taste or status unless the viewer happens to know the price tag beforehand. The footprint measures a tidy 250x480mm (WxD)

So, unlike a Rolls-Royce or a Chanel original purchased for status, this one isn’t self-explatory., so it doesn’t overwhelm with size either.

Switch on the rotary knob and you get a Frankenstein’s laboratory hum, thrum and then silence. After a few seconds, the amps are ready to use, but a good hour seems to be the minimum if you want optimum performance. They glow brightly, enough to elicit a sigh from any anachrophile.

Read more about the Gaku-On Monoblocks on Page 2.

I used the Gaku-Ons with suitably esoteric as well as mundane equipment, including Krell’s KRC, Musical Fidelity’s F22 and Audio Note’s M7 pre-amps, CD components from Primare, Krell and Vimak, the Gyrodeck/SME/Transfiguration analogue package and speakers including Apogee Stages, Wilson WATTs and Puppies, Sonus Faber Extremas and BBC LS3/5As. And the first thing I learned is that this amplifier likes neither low impedances nor big appetites, confirming Quortrop’s belief that a low impedance and low sensitivity are Satan’s playthings. Which rather limits the speaker choices of those who wish to spend lots of bucks on the rest of their systems to certain electrostatics, most horns and the Wilsons, which worked wonderfully with Gaku-On. So I stuck to the Wilsons for a week before discovering that the best match is actually the humblest.

Say/think what you like, the BBC LS3/5A is so remarakble a speaker that it’s worthy of a 128K goose up the backside. Because Audio Note’s pure tube concoction, despite bass which wouldn’t shame a 300W transistor behemoth (in terms of sound quality if not power), is primarily a midrange/treble device. That’s where it works most of its magic. That’s where you start forgetting that the price is so comical.

Much though I hate to say it — and I do, despite my championing of the high end — the Gaku-On is one of the sweetest, warmest, most holographic amplifiers I’ve ever heard. ‘Beautiful’ comes close to describing it, ‘natural’ even closer. Used within the limits of its power capabilities, and I would expect Quortrop to advise all potential purchasers to use horns or somesuch, it sounds easy, relaxed, yet commanding. The silences and air between the instruments, the shimmer to strings, the life in the vocals: this places the music in your room, causing the speakers to vanish completely. I can think of no experience other than my exposure to the Apogee Grand/Krell KAS demonstration at the 1992 Chicago CES which comes close to listening to the Gaku-On-through-LS3/5As for the first time in a darkened room, with Liza Minnelli belting out ‘Maybe This Time’ from the Cabaret soundtrack.

Taken aback? Transfixed? Thrilled? Hey, the last time I had goosebumps this big from music was at a concert, not in front of a hi-fi. And to test this, I played the same track for one of the industry’s most finicky listeners, a rival to Audio Note not known for his respect for the opposition. A musician in his own right, he heard his instrument and merely shook his head in wonder. And, as I know he thinks that PQ is some form of reptile, that confirmed by belief that the Gaku-On isn’t all hype.

. Maybe a shiny Ferrari. Or s. Indeed,not about high end audio in ‘conventional’ terms, but about one-off garmentlacks. But are there audiophile phase-splitting, the latter valvper transformer, while each requiresoOverdrive them and the bass goes lumpy, the treble soft. Gaku-On-based . Consider, then, certainike, the BBC LS3/5A is so remardio Note’s pure tube concoction. To this which would scrap for about 5 Which is generous, as scrap silver’s only worth a couple of quid an ounce. as you would Audio Noteser limits the speaker choices fora, a perfect voice carrierre it works most of its magic, just like the baby Beeb monitor. And tseemingly non-critical –hasers to use horns or somesuch –amplifier sand listening to EAR’s Yoshinos which comewhat I felt when that PQ is some form of sub-speciesthe sheer awe on his face confirmed m Only about 118,000 grand’s worth of it. Which leads me to another revelation voiced by my guest.

Having listened closely to the Gaku-On, with my own components and one of his own, he found himself lost in admiration, yet his manufacturer’s knowledge came into play. Looking closely at the Gaku-Ons, he did some mental pricing. His final comment? If the Gaku-Ons sold for even 20,000 per pair, they’d wipe out all the competition.

They’re that good, power limitations taken into consideration, of course. Think about this: If you had money to burn, how much would you pay for the finest-sounding amplifier in the world? Would you, like a wealthy art lover, pay 40 million for a Van Gogh? Would you, like a well-heeled watch collector, pay 250,000 for a Patek Philippe repeater? Would you, like a platinum-Amex’d diner, drop 150 on a single lunch, sans alcohol? And are these not just as ludicrous a list of purchases as 128,125 for some hi-fi equipment?

No way, and I mean no way, can anyone justify the Gaku-on for its parts count. Labour? I know classy hookers who charge less per hour. Perceived value? The Gaku-On looks like a DIY nightmare compared to a Jadis, a Krell, a Goldmund. But then there’s the sound, quite without question the least flawed performance I’ve heard yet from any amplifier. At all times you know you’re listening to pure tubes, even though there’s no vaseline-on-the-lens edge remova
l. The bass, even through the Puppies, is taut and extended. There’s more bottom-octave speed in other amplifiers, especially solid-state power houses, but the relative sloth of the Gaku-On compared to, say, the Krell MDA300s, is not enough to condemn the Audio Note. Remember: this amplifier simply isn’t worth hearing through speakers which dip to often below 4 ohms and 85dB/1W.

But, you’re rightly thinking, for this kind of outlay, the amplifiers should drive lightbulbs, hammer drills and Apogees. Wrong. That’s like saying a Ferrari should handle off-road duties. Horses for course. And in this case, the course is an easy load. And within that context, I have to say that the product is sensational. But, as always, there’s a caveat.

However bowled over I was by the sheer musicality of Gaku-On, I was reminded time and again of the Yoshino XXXB through the WATT/Puppy. And even though its 28k tag frightened me, I have to look at it now as ‘good value’. So, for the same bucks, you can quad-amp with Yoshinos — four pairs — and still have 16,000 left over for the rest of the system. Or a new Alfa Spyder.

I’m not coping well with this, feeling as must have those reviewers who had to assess Mark Levinson’s first price-busters in the early 1970s. Those of you who can ‘accept’ hi-fi even costing a low five figures will be pushed to the limits of your materialism even to understand how someone could have the sheer nerve to ask this much money for an amplifier. But, should you ever have to good fortune to hear Gaku-On, you will agree with me when I say that the sole audiophile per year who adds this to his or her system is one fortunate son of a gun. Totally insane, perhaps, but fortunate nonetheless.

You'll automatically be entered in the HTR Sweepstakes, and get the hottest audio deals directly in your inbox.
0 0 vote
Article Rating
Subscribe
Connect withD
Login
Connect withD
0 Comments
Inline Feedbacks
View all comments
Author
Home Theater Review.com
HomeTheaterReview Product Rating
Value:
Performance:
Overall Rating:
When you buy through links on our site, we may earn an affiliate commission. Your support is greatly appreciated!
This is the static ad content. This is just a placeholder for now to get things styled.
Visit Website