Bringing audio to certain spaces in your home can be a challenge. Tabletop speaker systems can be a great aid in this regard. Dennis Burger tries out Audio Pro's offering, the Allroom Air One tabletop speaker. 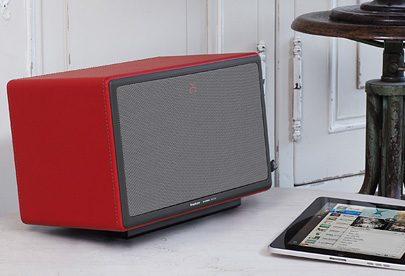 It never fails to tickle me when manufacturers include white gloves with audio components. One product I reviewed that came with such garnish was PS Audio's PerfectWave DAC, a $4,000 beast of a digital-to-analog converter that completely and utterly changed my opinion of the compact disc format. The most recent? Audio Pro's $799.95 Allroom Air One powered wireless speaker. Never mind the fact that these little white gloves are generally human-sized and therefore would never fit my massive Wookiee paws. Also never mind the fact that the Allroom Air One is wrapped in hand-stitched leather and doesn't really benefit at all from the white-glove service, at least when it comes to fingerprint avoidance. There's just something about opening up a box of electronics and finding a pair of white gloves that evokes luxury, and Audio Pro has definitely designed the Allroom Air One to be a luxury device.

In addition to its aforementioned hand-stitched leather coverings, the Air One sports a beautiful, if simple, industrial design - wonderfully finished, incredibly well built, with a little felt-bottomed wooden base that angles the speaker slightly upward or downward, depending on where you position it. The speaker also comes in your choice of a red, black, or white finish, and it boasts a number of connectivity options beyond the AirPlay that's obvious from its name (and is obviously the preferred connection method). In addition to AirPlay Direct, which allows you to stream directly to the Allroom Air One even if it's not connected to your home network, it also features DLNA streaming for use with Android phones and Windows' Play To feature, along with an optical digital input, a 3.5mm input for use with practically any portable media player, and a USB port that not only allows for a direct (and slightly sonically superior) connection, but also serves as a smartphone charger.

Most of the instructions for the Allroom Air One involve connecting it to your home network and setting up the AirPlay connection, which is handled via either Audio Pro's own iOS app, connecting your iOS device and sharing its WiFi settings, or dialing your Web browser of choice to the Air One's default IP address and plugging in your wireless network's SSID and security settings. I generally prefer the first method, but for some reason it wouldn't work with my iPhone 4, so I went the manual route and had the Air One configured in less than half a minute.

It didn't take long after that to figure out that the three most important factors in getting the most out of the Allroom Air One are location, location, and location ... but not in the way you might suppose. Yes, the enclosure is perfectly portable. Yes, it's only tethered by a power cord, making it easy to pick up, plop anywhere within your home's WiFi range, and quickly and easily stream music to it. However, the enclosure also sports a ported design that boosts bass performance, and these rear ports do limit it in terms of placement. Position the Air One too close to the wall, as I did at first, and it's far too boomy and bloated. I found that moving it about a foot-and-a-half away from the wall did wonders for the bass performance, removing the bloat and boom while still facilitating a strong, solid bottom end. Placing it in front of draperies also helped.

The surprising thing, though, is that the Air One does truly deliver its rated frequency response of 45 to 22,000 Hz. And if you need more oomph than that, it also features a handy subwoofer output. I was a bit disappointed at first to discover that the Air One doesn't engage any sort of crossover when you plug a subwoofer in. Given that it's all DSP-driven - with four individual amp channels driving each of its two 4.5-inch paper cones and one-inch soft-dome tweeters - that shouldn't have been too difficult to engineer. In practice, though, it doesn't matter too much. I connected a GoldenEar Technologies ForceField 3 sub to the Air One and found that it blended well with the speaker, giving added weight to tracks like Björk's "Army of Me" and Beastie Boys' "3-Minute Rule." For most of the tunes in my collection, the Air One pumped out more than enough bass on its own. That hefty bedrock also lends a lot of weight to straight-ahead rock, too. One of my go-to tracks for testing out these sorts of small speakers is the Black Crowes' "Descending," which begins with a beautiful piano solo and then erupts into a thunderous Dobro-and-drum riff. It's an incredibly dynamic transition, and one that more often than not knocks the knees right out from under compact speaker systems. The Air One, though, rocked that sonic explosion and begged for more.

One thing you may have noticed in the Air One's rated frequency response is that it doesn't include the standard "plus-or-minus 3dB." That's because the road from 45 to 22,000Hz via the unit is a quite hilly one, and although I'm not equipped to measure the speaker scientifically, I did detect a noticeable spike in roughly the 800-to-1,000Hz range by ear, as well as another at around 2,500Hz (the crossover point between the woofers and tweeters). They're not horribly egregious, and I imagine many listeners may prefer the bumps, because they do lend added emphasis to vocals. I do suspect that the uneven frequency response contributes to the Air One's somewhat inarticulate midrange performance, which made listening to tracks like Lyle Lovett's "Fiona" and Fiona Apple's "Shadowboxer" less fun.

On the other hand, I found the Allroom Air One's stereo performance shockingly good for such a small enclosure. Overall, the speaker sounds its best when you're sitting about three feet away. Even at that distance, you would expect the speaker to be effectively mono, but it rendered the whacky panning effects and phase shifts of the Jimi Hendrix Experience's "EXP" with aplomb ... and even successfully shoved Jimi's vocals on "The Wind Cries Mary" all the way over to the left side of the listening area, where they belong.

Read about the high points and low points of the Audio Pro Allroom Air One on Page 2.

High Points
• The Audio Pro Allroom Air One is a beautifully built AirPlay speaker with oodles of other connectivity options to boot.
• Stereo performance is exceptional for such a small enclosure, and bass extension is downright astonishing.
• Setup is quick and easy via Audio Pro's iOS app or manual configuration via a Web browser.
• The hand-stitched leather is beautiful, luxurious, and doesn't collect fingerprints.
• The Air On
e can easily be switched between Eco Mode and Sleep Mode; the former has an environmental footprint smaller than its actual footprint and the latter allows you to power the device on using AirPlay alone.

Low Points
• The Air One's rear-firing bass ports do make the speaker fussier in terms of placement than most compact wireless speakers.
• The frequency response is quite uneven, which results in a rather forward sound overall, as well as some muddiness when listening to songs that rely more on midrange frequencies than bass and treble.

Comparison and Competition
The portable AirPlay (or, more generally, wireless) speaker category is a crowded one; however, when you get up into the Allroom Air One's $800 price range, the competition thins out quite a bit. Bowers & Wilkins' Zeppelin Air and A7 AirPlay Wireless Music System are perhaps the most obvious competitors, the former at $599.95 and the latter costing exactly as much as the Air One. I like the balanced, polite, British sound and superior fidelity of the A7 more than I do the sound of the Air One, but I have to admit a preference for the latter's leather stylings.

The Allroom Air One's price also puts it in the same range as a number of wonderful powered bookshelf speakers, like the Paradigm Shift A2, which starts at $279 apiece. Combine a pair of A2s with Paradigm's optional Bluetooth module for $59 or, better yet, an Apple AirPort Express ($99) to the expansion slot on the back of the A2, and you have a fully capable self-contained streaming audio solution with even better stereo separation and incredibly fidelity, just without the Air One's portability.

Conclusion
When you add up all the pluses and minuses, for me, the Audio Pro Allroom Air One doesn't quite earn the white gloves that it didn't really need in the first place, mostly due to its uneven frequency response. Again, though, the boosts in upper-mid and lower-high frequencies do contribute to a distinctive voice that I imagine will be to a lot of listeners' tastes. Combine that with the exceptional build quality of the Air One, its numerous connectivity options, and its wholly distinctive finish, and I have no doubt that many will fall in love with this versatile little speaker.

You'll automatically be entered in the HTR Sweepstakes, and get the hottest audio deals directly in your inbox.
Author
Dennis Burger
HomeTheaterReview Product Rating
Value:
Performance:
Overall Rating:
When you buy through links on our site, we may earn an affiliate commission. Your support is greatly appreciated!