This early 2000's vintage Audio Research tube power amp harkens back to a day of older ARC designs yet packs the newest tube design power from Minneapolis, Minnesota. Ken Kessler takes a long look at this wonderful tube amp in this full review. 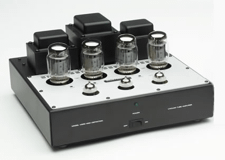 An amplifier has to be something truly magical to follow, let alone partner the Audio Research SP16 pre-amp. When I reviewed it for the May issue, that delicious control unit, 'affordable' by ARC standards, reminded me of why I fell in love with the Minneapolis brand above almost all other post-transistor valve amp makers. The associated stereo power amp, the VS55, merely reaffirms my faith. The warmth and appeal of the combination's sound I such that, if at any time in your 'audio past', you auditioned, borrowed or (lucky you) owned a piece of Audio Research equipment of 1972-1990 vintage, you're gonna wonder who requisitioned the time machine.

Don't choke on your cornflakes: I don't mean that the VS55 sounds 'old'. I'm suggesting, simply, that it's as commanding and instantly-recognisable-as-a-champion-product as were ARC classics of yore, like SP-10s and D-150s. But that's it - the rest is pure 2002. If synecdoche is your preferred literary conceit, then the most indicative departure from past practice is the VS55's completely new look; otherwise, you can take it as a given that the company's return to past values is NOT an exercise in retro.

I cannot even name an earlier Audio Research power amp which lacked a front panel - any reader with an elephantine memory please help out here - even if they were open-chassis types without 'sides': you'd still get a free-standing front panel. Thus, the VS55's styling might throw you. Instead of the usual full-width, brush metalwork-with-black handles 'lab-look' which has always identified the company's power amps, the VS55 displays its tubes with pride. While EC law dictates the presence of a tube cage or some form of protection on the grounds that valves run too hot for us to be exposed to them (Brussels typically contradicts itself, as low-voltage halogen lighting runs hotter and no protective screen is required), there will be a cage of some sort available; the review sample arrived au naturel.

Because of the absence of a fascia, the VS55 seems small. Moreover, its footprint is only 14x14in and the height a mere 7in, so the unit is truly compact. This gives it a bijoux visual appeal, as does an overhead view in which the unit is split into silver and black areas, the silver being a milled, anodised plate. The black area continues down to the four sides of the chassis.

What remains of a frontal area contains an on/off rocker switch and a green LED power-on indicator. The back surface contains connections for 4 or 8 ohm speakers via multi-way connectors (hurrah - no screw terminal strips!), phono sockets for single-ended line input, contact points for testing the bias, an IEC mains input and a holder for a user changeable mains fuse. The unit can also be switched on automatically with the preamp through a 12V trigger. Underneath are four elastomer feet, which provide nice mechanical damping.

Viewed from above, the front of the VS55 contains three 6N1P driver and input tubes, each wearing a damping ring. Behind them are four robust, rich-sounding, Russian-made 6550EHs and some serious power capacitors. Finally, at the very back of the horizontal surface is the only part hit savagely and unremittingly with the ugly stick: poorly-painted mains and output transformers just screaming to be covered with a can of some sort, as in the manner of Quad valve amps (old and new) or Nightingale's ADM30. Naked, they look like something borrowed from a well-used Dynakit. If the forthcoming EC-approved cage is full-sized rather than dimensioned just to protect the tubes, the look of the transformers won't jar so much. Audio Research, shame on you...

As far any company mission statement might go, it's clear that the VS55 is targeted at users such as I, those who have always felt that the sweetest-sounding amplifiers seem to be classic push-pull designs with 35-75W/ch ratings. Why, I don't know, but a lot of the 'true greats' seem to fall into that category, and ARC itself has always had a dandy 50- or 60-watter in its catalogue. In the case of the VS55, the rated output is 50W/ch continuous from 20-20kHz, with clipping at 52W. The power bandwidth has -3dB points at 12Hz and 50kHz, and frequency response is 1Hz to 60kHz. Overall negative feedback is 12.5dB, and hum and noise are stated as less than 0.2mV RMS, -100dB below rated output.

As with the listening sessions for the SP16, the VS55 was part of my regular system consisting of Wilson WATT Puppy System 6 and LS3/5As, Marantz CD12/DA12 and, for analogue, the Linn LP12/Ekos/Arkiv front-end). Reference power amps included the Quad II-fortys, Radford STA-25 and Dynaco ST70, the alternate preamps for comparison were the Quad QC24 and Musical Fidelity Nu-Vista, while wiring was Transparent Ultra and Kimber Select. Also, as mentioned in the SP16 review, Sonus Faber's Cremona matched the VS55 with the kind of synergy you only expect from single-make packages.

Believe me, it was not torture going through it all over again: I simply repeated my sessions as per using the SP16 with different amps; in this case it meant trying the VS55 with a couple of other pre-amps. As expected, the bulk of the listening involved the Audio Research units as a pair, but the mixing'n'matching was necessary to determine what sonic traits were exclusively part of the SP16 and what traits were attributable to the VS55. But I have to say that the two were so clearly designed to work with each other and so evidently voiced by the same design team that they sounded more like each other than any pre/power elements I can name. Let me try to explain what might seem like garbled thinking.

Normally, one expects the a pre-amp and a power amp from the same stable to compensate for the other's weaknesses, especially with the like-priced models which are expected to be used together. If the preamp is slightly sharp and the power amp is slightly soft, or the pre-amp has fat bass and the power amp tends to the lean, often the synergy cancels out the respective imperfections. But in this case, the SP16 and VS55 are so vice-free that neither has to work for the other.

It was uncanny. The VS55 shared the SP16's openness, the sweet top end, the clarity. Detailed and revealing, the VS55 also matches the SP16's 'freedom from the oppression' of amplifiers which are too hygienic. Or, to put it another way, the VS55 sounds like a tube amp all the way, and I would even nominate it, rather than a too-romantic-sounding vintage amp or modern SET, as the most vivid way of demonstrating tubes versus transistors.

But the role of a preamp differs from that of a power amp, the former having the more delicate, refined function of routing and amplifying low level signals. The latter, on the other hand, has the onerous task of driving the ornery loads created by loudspeakers - a far nastier job than that of a preamp looking at the line level input of a power amp. It was to my great delight that the VS55, despite a power rating which is regarded these days (except by SET users) as positively undernourished, never exhibited any signs of its middle double-digit wattage.

Think of the loads it faced: the sensitive but awkward WATT Puppy; the power-hungry but non-threatening Sonus Faber Guarneri; the sensitive 4ohm Cremona; the hungry, high impedance, low-power-handling LS3/5A. It's here that I have to repeat a personal preference - that of listening at levels considered by many to be very low - so that you don't think I treated this like a 300W Krell at a party for Motorhead fans. Conversely, I'm not a total wussy and do rock out on occasion. And yet at no time was power ever an issue. And glory be, the dynamics NEVER seemed constrained, the transients were always fast in both directions, the slam was never less than satisfying.

Which is where the VS55 departs from, say, a circa-1980 valve amp of similar pedigree (let alone a vintage valve amp of the Radford/Leak/Dyna variety). With music of the 'massive' sort, especially the bottom-heavy pop-reggae of Eddy Grant, Kodo drumming, and bombastic soundtracks with ample tympani, the VS55 acted more like a Reference 300 than a 50-watter. Is this important? Is extreme bass a real concern for listeners of acoustic instruments, live performances, small and intimate works?

It takes an a capella recording such as a Persuasions disc to show that the atmosphere, if not the actual sound of the performers themselves, is affected greatly by bass performance. It explains to me why those who have integrated true subwoofers into there systems would never be without them, even if the system will never be asked to reproduce the DVD of Pearl Harbor or The Fast & The Furious. It vindicates Richard Lord of REL, who told me, the first time I ever met him and at a period prior to home cinema's ascendancy, that every system

That, however, focuses on a narrow (albeit important) part of the spectrum. For me, quality begins and ends with how a system handles voice, and here the VS55, like the SP16, reveals its tube-y origins unashamedly. However modern the VS55's frequency extremes - a good thing for most, provided that the upper treble doesn't screech - the midband is warm, cosy and precisely the reason why valves amps dominate my museum AND my day-to-day reference system.

But here's the same burning question which vexed me with the SP16: Is the VS55 reminiscent of the ARC power amps which inspired it? Hmm...less so than the way the SP16 honours the earlier preamps. I would suggest instead that it's a true baby sister to the Reference 600 and Reference 300, rather than amps of longer vintage. Which begs the following: how about a cost-no-object version of the VS55, with loony-tunes componentry, a fascia and a couple of meters, called the Ref. 55?

That dream model would contradict the very raison d'etre of the VS55: its price. At 2699, the VS55 is the least expensive all-tube Audio Research power amp in a long time, priced such that with the line level version of the SP16, it comes at under 5000. I suppose that 5000 has as much psychological importance for people spending in that bracket as 99.99 does for the less well-heeled, hence the concern for the pricing. Not being a marketing man, I find arbitrary price points so stupid and artificial as to be insulting. What's far more relevant is that the VS55 will give those endowed with 2699 the kind of sound I wouldn't grumble about at ANY price. Fellas: we're talking about a future classic.