Wait - a rate Ken Kessler Audio Research review that isn't packed with compliments? It can't be - can it? Ken takes offense to the new look of the ARC VSi55 Integrated amp but sure as hell can't pick on the sound as ARC rules supreme on all of our world's. 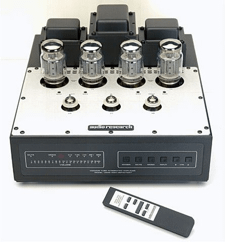 Whatever possessed the guys at Audio Research to dump the look of the CA50 integrated amplifier when they came up with its replacement, I'll never know. That now-departed product screamed 'Audio Research!' from 30 paces, endowed as it was with a proper ARC front panel, with design cues that go back over 30 years. Instead, with the VSi55, we get hair shirt.

One might suppose, correctly, that Audio Research is simply gracing impoverished valve newbies with a taste of the products from which the VSi55 is derived. The lip-smackingly-good VS55 and VS110 power amplifiers - two stupendous products by ANY measure - are responsible for a rebirth, transforming the company from fusty to funky. The 'matching' SP16 pre-amp itself is a delicious reminder of ARC pre-amps of yore, in the most positive sense. By virtue of being nearly affordable, this trio widened the profile of ARC ownership, but we're still talking ca £5000 for the least-expensive pairing. As for the power amps, they reverted not to early ARC styling but to a wholly utilitarian, generic-1950s look of exposed tubes, exposed transformers - function over form.

All of which is very nice with power amps, because you don't have to look at them. Integrateds are another matter entirely, as you need to access the controls, so a touch of style wouldn't hurt. But then there's the price...

With a rated output of 50W/ch and a retail price of only £2895 including remote control, the VSi55 certainly undercuts any separates combination the company can offer. More interestingly, the VSi55 betters the early CA50 integrated amp it (sort of) replaces by £500. That's a helluva savings just to forego a pretty fascia. What you get here is a near-ringer for the VS55 power amplifier, but with the addition of a pre-amp section, its presence restricted to the shallow front edge of the chassis.

Because of the slight dearth of space (compared to a full-height pre-amp), all of the functions are closely grouped together as small, square buttons, with no rotary for volume: instead, you get buttons for up and down. As a result, you will find the remote to be used more often than hand-to-amp contact. Arrayed across this pitch black panel are, on the left, a cluster of green LEDs indicating volume level in 20 steps and separate LEDs for mute, mono and indication of the chosen input: CD, tuner, video and two marked SE1 and SE2, denoting single-ended line sources. Balanced operation is not part of the recipe.

In a matching segment on the right are the six 'soft touch' buttons for power, mute, mono, input select and volume up/down, in SP16 pre-amp fashion. These controls are mirrored on the slim remote. Above this panel, on the flat, horizontal surface, is a silver plate cut out for the valves; behind it are the mains and output transformers and the tops of the capacitors. Here's where things get ugly: I love retro as much as the next guy, but the finish on these made me flash back (as did the VS55) to Dynakits of 40 years back, where finish was an afterthought not allowed to compromise the sticker price. Fortunately, there's an optional tube cage for £250, which - when in place - will at least partly obscure the transformers. I was most disappointed to see that the metalwork of the review sample was actually sagging in the middle. (Then again, a retailer had the review sample before it reached me. And the cheap bastard took the batteries out of the remote.)

At the back of the 14x8x16in (WHD) chassis are five pairs of single-ended inputs, a full-range mono subwoofer output, voltmeter test points for setting bias, 0-4-8 ohm five-way binding posts, a fuse holder and an IEC mains input socket. The quality of these fittings is impossible to fault, gold-plated and robust, and there was plenty of space to enable you to fit fat cables and still have enough acreage in which to swing a spanner. Curiously, there's no tape output, but then Audio Research might just be tipping the hat to the 21st Century: nowadays, pirates record via computer straight onto their CD burners.

You will do a double take when you see this if you're familiar with its amp-only sibling. The VSi55 may be 1in taller and 2in deeper than the VS55, and the milled, anodised top plate is 1 1/2in deeper, with larger inset Audio Research logo as used on the VT series of the power amps, yet the resemblance is almost clone-like. But it's still kinda ugly.

Only it's a bargain, too. For a mere £200 more than the power-amp-only VS55, you get a dream of a 'front end' in the form of a passive control section, utilising microprocessor-controlled relays. Try finding a decent standalone pre-amp for £200. The high performance input relay paths are short, the same as those in the flagship REF2 Mkll, and the microprocessor remembers the last input selected and the stereo/mono setting when it is powered down. Switch-on is followed by a 30-second warm-up period in full mute; conveniently, the volume control resets to zero to avoid unwanted thumps or bangs.

Similarities to the VS55 continue inside. The active circuitry is essentially that of the power amplifier, but with 7dB more gain for greater sensitivity (0.38V), accounting for the passive pre-amp. The VSi55 features the VS55's Class A input with regulated DC heater supply and driver stages consisting of three 6N1P valves. The partial cathode-coupled Class AB output stages use two pairs of 6550EH output tubes, Russian-made, and the power was more than adequate to drive Wilson WATT Puppies, LS3/5As and - best of all - Quad ESLs, which simply adored the baby ARC.

It's like this: you approach the VSi55 the way you would any stripped-down equivalent of a luxury item. Examples would include entry-level cars instead of models from the extras-laden end of the range, cameras with fewer features - whatever. The point is, you get the most important part of the package - its inherent performance - at a price you can afford. What you give up, in varying measure, are looks finish and/or facilities, rather than capability.

Quite frankly, you'll feel no loss in terms of sheer day-to-day operation, be it ergonomics or facilities. You have the remote, you have enough inputs, you have the controlled switch-on. So what do you really give up for the savings? Looks and finish.

Once you get past the unit's undistinguished presence, you start thinking of other analogies, goofy-looking stuff with performance that transcends any negative signals the form may convey. Lotus 7s, Aga cookers - there are plenty of brilliant objects that seem to have been conceived when the designer was suffering a hangover or mild dementia. The VSi55 is simply too good, to virtuous to be dismissed because it's so dumpy.

Fed with signals from the Marantz CD-12/DA-12 CD player and the SME 30 Mk II turntable/SME Series V arm/Koetsu Urushi cartridge through the EAR phono stage, wired entirely with Transparent cables, into the aforementioned speakers, the baby ARC took all of 20 seconds to convince me that it was a thoroughbred. My current tingle-up-the-spine disc, Joss Stone's debut, The Soul Sessions, provided ample evidence that this amplifier could handle the all-important midband and vocal textures with the sort of verisimilitude that we crave from a 'high fidelity' system.

OK, OK, so we're talking push-pull tube circuitry from big, fat classic glassware (rather than sentiment-drenched 300Bs). It was almost a given that there would be warmth galore, with sound that's easy on the ears. But there's more than a hint of modernity in the form of detail retrieval and sheer clarity that makes this amplifier appealing not just to tube converts who are short of cash. I can see it being used as a means of weaning listeners away from transistors and onto valves.

Probably the most impressive element, if the above strikes you as an amusing way to position an amp, is the bass. No way will you mistake the lower registers for the sphincter-clenching bottom octaves recreated by big transistor powerhouses. Never would you consider even showing let alone playing this to a double-digit-IQ'd, backwards-baseball-cap-wearing hip-hop casualty. It does not move mountains, nor cause plaster to crack. It will not make you think that a 16-wheeler just drove by your house. But it will do justice to any recording you can feed it, from snap-bass funk to acoustic jazz to explosive soundtracks.

Despite bass not being an area about which I'm overly concerned, I have to admit that there was something terribly seductive about the VSi55's behaviour down below. The sound had a foundation, a mass that suggested a much larger amp with far greater power reserves and wider dynamic capabilities than one would associate with a 2x50W tube job. And for those of you who think laterally, no, I'm not suggesting that the marriage with Quads works so well because they are less revealing than the Wilson WATT Puppies. It will please you to know that even the Puppies couldn't expose any particular shortcomings.

But there's one other area where the VSi55 denies its role as the entry level fixture in the ARC catalogue: it creates a vast, genuinely three-dimensional soundstage. I've heard bigger - the McIntosh C2200/MC2102 combination reveals another 'few feet' of depth and width - but one cannot fault the sense of proportion within the VSi55's ample playground. Add to this enviable transparency and a sweet, fast and precise upper register, and you have a little honey that reminds me (and not just because of the naff finish) of the truly classic Dynaco PAS3/Stereo 70 combination.

If 'utilitarian' is a four-letter word in your dictionary, another grand will pay for the shockingly good T+A V-10. If you need a tape loop, or balanced operation, or even a 19in front panel, the market's full of alternatives. But if you want honesty - both in terms of sound and value - and can live with the basics, the lure of the VSi55 could prove overpowering.