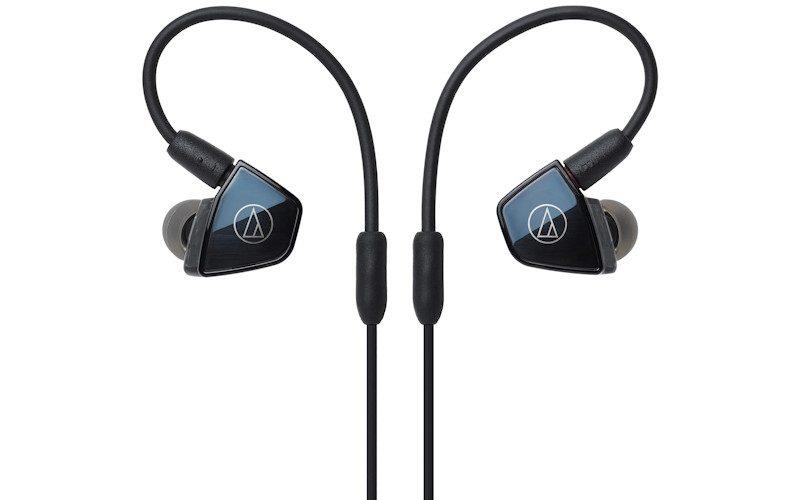 When you look at Audio-Technica’s in-ear monitor listings, you’ll find the description of the LS400iS right at the top, which makes perfect sense given that it’s A-T’s highest-priced universal fit in-ear monitor ($579 MSRP). This in-ear monitor features four balanced armature drivers in each capsule: one treble, one mid, and two bass drivers. And while there are multi-driver options from some other manufacturers at much lower prices, the LS400iS offers a unique combination of sound and features that could sway many perfectionist audiophiles who have been reluctant to add an in-ear monitor to their playback arsenal.

Product Description
The LS400iS is called a quad monitor, since each capsule has four balanced armature drivers. The capsules themselves are made of stainless steel and Trian resin. Within the capsules are acoustic sound pipes made of stainless steel and resin that carry the sound from the openings of the balanced armature drivers to the ear tips. Unlike some in-ear monitors, which employ multiple tip openings, sometimes one for each pipe, the LS400iS combines the four pipes into one opening at the ear tip. 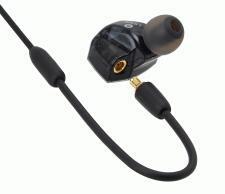 Published specifications list the LS400iS as having a 15Hz to 20kHz frequency response, with a sensitivity of 105 dB/mW. The LS400iS’s impedance is rated at 20 ohms, and recommended maximum power is 3mW. Weight is listed as only 12 Grams (0.4 oz) sans cable. Crossover points and slopes for the crossovers are not listed by Audio-Technica.

As you would expect from a premium in-ear, the LS400iS has a removable and replaceable cable that uses an A2DC connector. This allows the LS400iS to use third-party cables or even wireless adapter cables. Along with the removable cable, the LS400iS comes with four tips and a hard case with a Kevlar cloth covering.

Ergonomic Impressions
After trying all the tip options, I bypassed the silicon tips and settled on large Comply foam tips. Using the Complys, I was able to get a well occluded seal combined with exceedingly comfortable fit. The first 3.5 inches of the cable on the earphone side has a memory cable loop that goes above and behind your ears before the cable drops down, so it conforms to your ears, making the LS400iS a breeze to put on and take off. 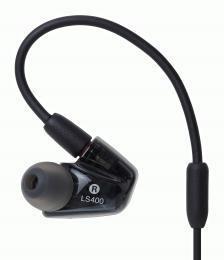 Because the cable has built-in playback controls located about five inches down from the right-side earphone connection, though, there’s really only one way to wear the LS400iS: with the cabling going around your ears and the then a straight drop down the front. I often prefer to have in-ear cables routed down my back, especially when I’m working out, but with the mic/playback controls located where they are, that’s not possible with the supplied cable. The good news here is that you have options for third-party cables sans playback controls and with a cinch washer, so you can get a proper behind-the-head fit.

On the subject of fit, the LS400iS garners high marks. Unlike some multi-driver in-ears, which can get rather bulky, the LS400iS is remarkably lightweight. Also, the tip itself is not a deep-insertion design. Instead, the tips sit at the opening of your ear canal and a foam tip–if you use it–makes an occluded seal at the opening of your ear canal. Almost all the weight of the LS400iS rests on your auricle when the LS400iS is properly fitted, making them virtually disappear after a couple minutes of wear time. Once a good fit is achieved, isolation was good enough that I would not recommend using the LS400iS in an environment that requires any degree of aural situational awareness. While not quite as isolating as some of my custom in-ears, such as the Jerry Harvey Roxanne, the LS400iS will still knock about 20 dB off of outside ambient noise.

Sonic Impressions
I would place the LS400iS firmly into the “we’re trying to be as neutral as possible” camp, as opposed to the “people just want to have fun” in terms of tonal balance. I used the LS400iS with a wide variety of portable players, including the HiDiz AP60 II (reviewed here), Astell&Kern A&futura SE100, and the Sony NW-WM1Z. I also used the LS400iS with the new Sony Desktop headphone amplifier, the DMP-Z1 ($8,000 tentative MSRP) and the iPhone SE. In every case, driving the LS400iS to a satisfying volume was easily accomplished with lots of power to spare. 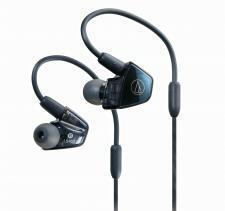 Even with the weakest amplifier I attempted to drive them with, which was the iPhone SE, the LS400iS had not only adequate volume but also bass was with good extension and drive. When I moved up to a more powerful drive system, such as the Astell and Kern SE100, the bass dynamics and impact increased. Not only did the LS400iS deliver plenty of low bass energy, but it was always controlled, with easily decipherable pitch definition and no overshoot. I know that many pop music fans tend to gravitate toward in-ears with more of a “fun” tonal balance, with boosted mid-bass. In this regard, you would think that the more even-keeled LS400iS might render some of their fave pop tracks with less juice than a “fun” in-ear, but I did not find this to be true. On my favorite bodacious big-money pop mixes, such as Nicki Minaj “Pills and Potions” or Charli XCX’s “Track 10,” the sub-bass was well-defined, controlled, and impactful via the LS400iS. For those who have w-i-d-e musical tastes, the LS400iS can handle any genre.

While not the biggest soundstage I’ve experienced from an in-ear, the LS-400iS does a good job of placing instruments precisely into a three-dimensional sound space. The LS-400iS’ image presentation reminds me of what I’m used to experiencing from the Ultimate Ears Live custom in-ear. While the spaces between instruments and edge definition wasn’t quite as definitive, the sense of instruments’ and vocalists’ dimensionality within the soundstage was almost identical.

As drivers are added to an in-ear, the number and complexity of the crossovers can be a source of fidelity loss. The better the cohesion between drivers, the more convincing the result will be. The LS400iS’ four-driver design integrates so well that I did not hear anything even approaching discontinuity or lack of a cohesive presentation.

In terms of detail and definition, the LS400iS may not be quite as revealing as some of my reference custom in-ears, such as the Empire Ears Zeus-XR, but they do deliver most of the low level information in a way that avoids being too revealing of the shortcomings of bad or peaky recordings. Also, the LS400iS sounds more than acceptable in terms of detail and involvement even with low-power sources such as an iPhone SE.


If you are looking for in-ears with four balanced armature drivers in each capsule, there are many options currently available. 1More has a Quad Driver model available at $199 MSRP. It has a much looser fit that has the bulk of the in-ear resting on your auricle like an ear-bud. Also, the 1More does not have a removable, replaceable cable.

Another option is the Westone W40 ($499 MSRP). This four-driver design does have removable replaceable cables with an MMCX connection, two cables, and even replaceable colored faceplates. The Westones also have the option of using their UM-56 ear-tips, which give them an almost custom-level IEM fit.

Conclusion
While certainly not the least expensive in-ear with four balanced armature drivers, the Audio-Technica LS400iS delivers excellent and tonally neutral sound, a comfortable fit, and an unobtrusive yet stylish design. While most other in-ears are discounted as standard operating procedure, the LS400iS is still being offered at full MSRP at major sales outlets. One can only infer from this that the LS400iS is selling briskly enough that Audio-Technica hasn’t felt any need to drop the price. After spending time with the LS400iS, I understand why: it delivers all the sonic and ergonomic essentials.