AudioControl has announced two new AV receivers: the AVR-7 and the AVR-9 (shown here). Both are seven-channel models that include support for Dolby Atmos, with extra preamp outputs that allow you to add additional amplification for an Atmos setup. Both... 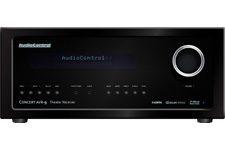 AudioControl has announced two new AV receivers: the AVR-7 and the AVR-9 (shown here). Both are seven-channel models that include support for Dolby Atmos, with extra preamp outputs that allow you to add additional amplification for an Atmos setup. Both models also offer seven HDMI 2.0a inputs and HDCP 2.2 support, as well as DIRAC LIVE FOR AUDIOCONTROL calibration software. Pricing has not yet been announced, but the AVR-7 and AVR-9 will ship in the fourth quarter of 2015.

From AudioControl
AudioControl has announced the launch of their new 7.1.4 Concert AVR-7 and Concert AVR-9 receivers with Dolby ATMOS, 4K, HDMI 2.0a, HDCP 2.2 and introducing DIRAC LIVE FOR AUDIOCONTROL.

AudioControl’s new AVR-7 and AVR-9 receivers deliver a visually stunning entertainment experience, designed by a company with nearly 40 years of making some of the best audio and video products in the world.

Behind the striking contemporary visual design, the Concert AVR-9 and AVR-7 benefit from the high-end audio performance that AudioControl is renowned for. The AVR-9’s powerful high-current 7 x 200 watts per channel theater amplifier creates a truly incredible audio platform that turns watching a movie in your living room, media space or theater into a movie lover’s nirvana. The Concert AVR-7 also benefits from the same high-performing audio and video platform as the Concert AVR-9, powering its seven-channel amplifier at 100 watts per channel into eight ohms. Both the AVR-7 and AVR-9 benefit from four high-performance Dolby ATMOS pre-amp outputs. Users can drive the Dolby ATMOS channels using the high-power amplification contained inside the Concert AVRs and also add additional power utilizing AudioControl’s high-power two-channel Bijou 600 or Rialto 600 amplifiers as the perfect Dolby ATMOS amplifier.

To complement the high performance of AudioControl’s new Concert receiver platform, AudioControl is introducing ‘DIRAC LIVE FOR AUDIOCONTROL’ room correction for all of its home theater products, providing one of the most effective and flexible room calibration systems available today.

AudioControl’s Concert AVR Receivers are designed exclusively for the custom install channel. They have Ethernet connectivity and RS-232, and are compatible with leading control systems like Control4, Crestron, RTI and Savant. Both models have the ability to scale to any resolution standard or high-definition sources where required. The audio platform builds upon AudioControl’s legendary audio reputation with powerful, dynamic, audiophile amplification supported by the best in room correction through DIRAC LIVE FOR AUDIOCONTROL.