German-made Audiovalve Sunilda, as you might surmise, uses tubes in its stand-alone phono-stage design. It uses ECC88 and 12AX7 tubes to deliver up to 60 dB of gain in moving coil mode. It combines many virtues into a very attractive package 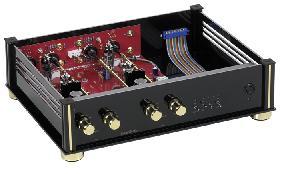 One of audio's best-kept secrets is the AudioValve Eklipse pre-amp. All-valve, remote controlled, built to standards that you'd expect of Germans and - above all - a true bargain at £2100, it lacks only one thing: a phono section. OK, so it's toe-curlingly ugly with its black-and-gold, steam-punk-Jules-Verne-reject styling, but the sound is so good and the price so low that you can overlook the aesthetics. (Please, Herr Becker, hire an industrial designer!!!!) For those of you with a taste by-pass, the good news is that the Sunilda phono stage is built into the same chassis.

It is, therefore, physically impressive for a phono stage in terms of bulk and heft, more in keeping with the Audio Research PH5 and other 'full size' units than the typically cigarette-pack-sized offerings. Blessedly, it eschews minimalism because the Sunilda is clearly aimed at the vinyl addict, the sort of audiophile with more than one turntable and a herd/coven/school/flock of cartridges. For this alone, it raised the hairs on my neck. However much I worship the PH5, there are times when I find its lack of facilities limiting. (Then again, I'm a reviewer as well as vinyl addict, and I do change cartridges frequently.)

Helmut Becker likes wireless assembly, so the guts of the Sunilda rest on a double-sided PC board, laid out in a dual-mono topology, all beautifully assembled. Becker doesn't compromise on the components, and he indulges in hand-selection, so the see-through lid is no conceit: you'll enjoy gazing at its innards. For hours.

He describes the Sunilda as a 'three-stage phono-preamplifier, based on 6922 or ECC88 and 12AX7 or ECC83 frame grid tubes.' The Sunilda - named after the daughter of Siegfried and Brunhilde, so Valkyries can wallow in this one - accommodates both moving magnet and moving-coil cartridges. What inveterate fiddlers will love is that the Sunilda is two complete phono stages in one, with BOTH sets of inputs enjoying the full complement of settings, unlike some that offer either m-m or m-c for one or the other inputs. Where this might prove handy is for A/B'ing arms or turntables when you would need to use the same cartridges in both. And if you had two identical turntable/arm set-ups, you could use it to compare cartridges, including two of the same make and model. (Ask Decca-fiends about sample-to-sample variation...) And if you have two identical turntable/arm/cartridges, well, how about A/B'ing different LP pressings. Like 180g vs 200g or reissue vs original?

Thus, you have, independently for the two inputs, adjustable impedance and capacitive load, which you can do 'on-the-fly' while listening. Across the front, you have four rotaries and four toggle switches. The rotaries, two per input, set capacitance of 0, 100, 220 or 470pf and impedance of 47, 100, 220, 470, 1k and 47k ohms. Note that in moving magnet mode, the gain is 20dB lower than in m-c mode, at a fixed input-impedance of 47k.This means that users who like their m-cs at 47k ohms can employ that value with some added gain. Koetsu users: rejoice!

Sunilda's RIAA de-emphasis is passive and split between the first and second stage. According to Becker, 'Dividing the RIAA network over two amplification stages lowers the insertion losses of the passive network dramatically. Furthermore, the design has a total absence of feedback, thus increasing the overall dynamics.' He also opted for solid-state regulated power supplies. 'This is the best way to obtain low noise and a supply line with a very low impedance, to increase the performance in the lower frequency range.'

Other niceties include an outboard power supply, housed in a separate aluminium case and connecting to the main chassis with a computer-grade cable. The main case itself is laser-cut, 4mm thick steel, as mentioned before absolutely identical in size to the Eklipse line-level pre-amplifier. Beside offering the Sunilda in both silver and black, you can also specify silver or gilt knobs, again depending on your stomach for bling-bling. Alas, Sunilda sunglass are not supplied.

This unit arrived in the midst of my most overactive analogue phase in years. In addition to SME 10 and SME 30 turntables, I've recently added a Trio L-07D, and I have a fistful of cartridges to play with, and of every stripe: London Gold and Maroon (the latter mono), Koetsu Black Urushi, Shure V15 V, Lyra (mono) Dorian, Transfiguration Temper V and a few others. With this mix, I was able to assess most of the settings, comparing m-m vs m-c, assorted impedances and other characteristics. First, some observations:

If you are using a complex system, and a couple of turntables, you
must pay attention to earthing to avoid a loop. You may find yourself
opening AC plugs to disconnect earths. Moreover, the Sunilda responds
well to quality mains leads, a solid mounting surface and a good set of
phono cables to the pre-amp, which in this case was a line input on the
McIntosh C2200. I used Transparent Reference, and did not earth the
Sunilda to the Mac. The rest of the system included the McIntosh MC2102
and Wilson WATT Puppy System 7.


What was common at all stages was a consistency that shows Becker
favoured neither mm nor m-c: the Sunilda treats both equally. Where it
shines is in its ability to let the user extract the most from either. I
know, there are phono stages that provide even more settings, but
AudioValve struck a nice balance. The only thing I would have added were
oddball impedances for mm so I could tweak the Deccas, but then I've
only ever found these on Tim De Paravicini's magnificent solid-state EAR
324.

Provided you address the cabling properly, the Sunilda is eerily
quiet, if not quite on a par with the Sutherland Phd. And yet you never
forget that it's all-valve, with a warmth that separates it from the EAR
324. The latter is hardly 'cold', but it is so precise and proper that
it approaches 'laboratory equipment' in its presentation. The Sunilda is
definitely fatter, more . Intriguingly, transparency is on a
par with solid-state phono stages, so either Becker found some top-grade
tubes, or - more likely - he extracted better performance from the
glassware he used than is humanly possible, something he does with his
power amps. (Actually, for Sunilda he's using Electro-Harmonix tubes,
which are mighty fine.)

Sunilda's warmth was kept in check so that it didn't overwhelm the
listener with a hyper-analogue sound. It's easy to dial in so much
euphonic artifice that you can make any LP sound more inviting than most
intrinsically harsh digital sources, but that means throwing away
super-quick transients, or bass slap. Sunilda sacrifices nothing: it
pours forth the detail, the air, the sense of a three-dimensional space
and the kind of control that's hard to fault. If, on the other hand, you
need a vice-like grip over the entire affair, you simply have to turn
to EAR. (Damn, that 324 is some kind of wonderful...)

What made me fall in love with the Sunilda were big band mono LPs,
which possess a sheen and shimmer that exists nowhere else. Trust me:
Billy May LPs have to be heard in true mono. With both the Decca Maroon
and the Lyra Dorian, I was able to summon up room-filling, ear-caressing
sounds that can only be described as 'silky'. I hope that analogue's
leading warriors, Michaels Hobson and Fremer in the USA, get hold of
Sunildas, because Sunilda will prove to be a positively Wagnerian ally.
If you have any doubts about the worth of vinyl in 2005, this phono
stage will help dispel them.

As you can imagine, competition in this sector is tough: really,
really tough. I recently bought the Audio Research PH5, and - love it
though I truly do - I have to admit that it's shy of adjustability, and
lacks the facility for a second turntable; this makes it a pain in the
arse if you like to fiddle about with cartridges and decks. Conversely,
it's THE choice if you fiddle around. EAR's phono offerings are
always magical, from the least expensive to the sublimely dear; Quad's
new valve phono amp is even more of a bargain than the Sunilda;
Sutherland's Phd is the quietest phono stage I've ever heard (to be
reviewed soon!). As any show-goer will tell you, there are countless
other superb phono amps to consider as well. Sunilda, however, is
something genuinely special: it combines the best balance of all of the
above phono amps' virtues, sonically and practically, then doubles them
up and sells them to you for a sane price.

But take a tip from KK: order yours in silver rather than black.