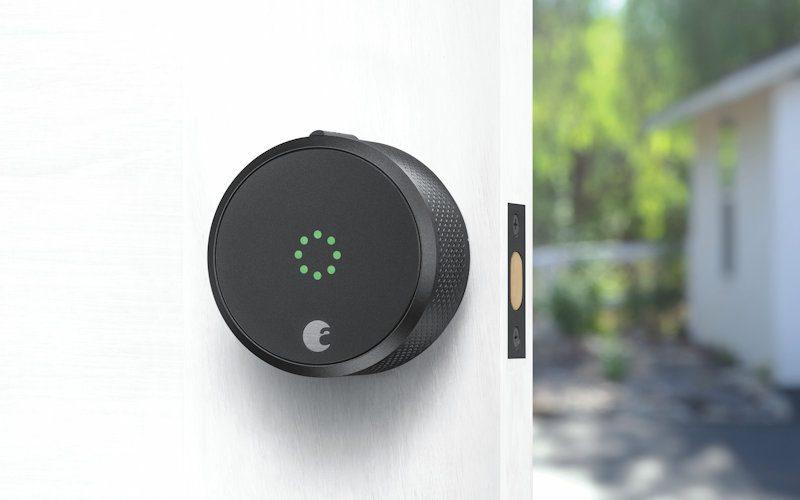 It is rare when I have a love-at-first-sight experience with a consumer electronics product at this stage of my career, but that is exactly what happened the first time I saw an August Smart Lock Pro. I was at...


It is rare when I have a love-at-first-sight experience with a consumer electronics product at this stage of my career, but that is exactly what happened the first time I saw an August Smart Lock Pro. I was at the new Amazon store in the vastly upgraded "village" (translation: super-fancy shopping center/mall) in my neighborhood, where they sell all sorts of crazy products ranging from books and magazines to toys to games, as well as things like popular home automation items, be it robot vacuums, Ring doorbells, what have you. What was so noticeable about August at first glance was its simplicity. The unit is a somewhat large (relative to a door handle), simple cylinder that when powered with a battery and hooked up to Wi-Fi can be a pretty simple yet powerful tool.


Priced at $229 alone or $279 with the "Connect" option, which allows you voice access, this keyless lock is designed to augment your existing deadbolt. There are various other derivations of the August products, including a Ring-like camera-lock in the August Doorbell Pro, or simpler offerings such as the August Smart Lock. But for my needs, the Smart Lock Pro was the answer. August also offers a matte, dark gray color option, but the silver matches my brushed nickel INOX door hardware perfectly.

Installation
In addition to not really accommodating a round door lock very well, my front door also isn't the main point of ingress and egress for our home, since we typically enter and leave through the garage. So that's where it made the most sense to install the Smart Lock Pro. I considered making this a DIY project but opted to have a professional locksmith come out and install the hardware, which for about $100 (similar to what, say, Amazon.com would charge for labor) was a fair value. He neatly was able to get the silver cylinder installed on the inside of the door with the new lock hardware that I bought to upgrade that locking system. In about 30 to 45 minutes, we were good to go with the installation.

Setup
This is a new-school, mainstream home automation product, which means setup (and in the case of the August Smart Lock Pro, operation) through a dedicated smartphone app. A quick trip to the App Store on my iPhone and I was ready to go. Provided AA batteries got the unit working, although I like the rechargeable nature of the Ring Doorbell Pro better.

Setup was a snap. I had one hiccup getting the app to connect, but that worked itself out and I was up and running. I labeled my unit for the garage (I have another one downstairs) and got down to business. You do not need a hub of any sort to make the August products work; just a good Wi-Fi connection, which most of us all have.

Voice Activation
Voice control of home automation is a big topic among the HomeTheaterReview.com staff, as well as our readership. Some love it. Some can't live without it. I personally am not a fan, nor do I trust the concept. Too many times, I am yammering on the phone about something like going on a trip to say Cabo and the next thing I know, 20 minutes later, I see an add on Facebook for a resort in the Mexican town. With that said, for those who love voice activation, the August Smart Lock can work with Apple Siri, Google Voice, and Amazon Alexa. That seems like everything this side of Josh.AI, and for those who love voice control, this must be viewed as a big perk. 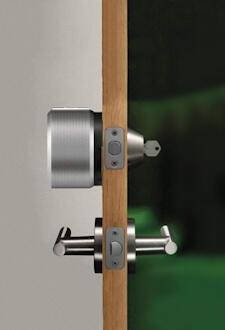 The purpose of the August Smart Lock is a pretty simple one for me, in that it lets my wife and I in an out of the garage door without having to fumble for keys. Coming home with a load of groceries? I simply unlock the door before getting out of the car as the "geo-fence" for this product is the Bluetooth range, so if you have your phone in your pocket and you are close enough, you can automatically or manually open the door. Walking the dog around the block? Let's face it: I'm going to have my phone with me when I do so, but I like the fact that I now no longer need to carry keys. The company also offers a keypad option for those times when your phone unexpectedly dies, although it's not quite as sexy. Still, I can understand the appeal. But for me, having smartphone access is the real draw.

While going keyless is appealing, you might want to bring one as a backup anyway if your battery is getting low. The August product will email you at 25 percent, 20 percent, 15 percent, and at other points of battery life failure. The unit doesn't use too much power, so I expect the battery to last a very long time (years, I expect), but having a key in your pocket and/or periodically changing your AA batteries every six to 12 months might be a smart preventative move if you are worried about being locked out.

You can also keep track of who comes in and out of your house with the right setup. You can set timers to let the cleaning lady, contractors, the babysitter, etc., have access at preselected times if you like, but I didn't feel compelled to program my system to be just that fancy. It is there if you want it, though.


When we first moved in to the house, I had the place re-keyed from a somewhat disreputable locksmith. He showed up quickly but gouged the hell out of me to the tune of over $1,000 for keys and re-keying a number of existing locks. At my request, he brought keyless door lock options from a number of well-known companies such as Yale and Schlage. Both had a look to them that I didn't really like. Not simple enough. Not slick enough. His prices were also many times more than they sold for on Amazon, and I passed. As I said, he was a bit of a shyster.

There are a lot of players in the keyless lock space right now, ranging from companies that you've likely heard to ones that you may not have. The most "August-like" is Danalock, which is a Bluetooth and/or Z-wave controlled device. It physically reminds me of the August, but I've never gotten to see one in action.

Conclusion
The brave new world of home automation has gotten a little better and a little more down to Earth with the advent of the August suite of products, specifically the Smart Lock Pro. This simple product adds a little bit of ease to your life at $229. I try not to live my life on my iPhone, but I also don't leave home without it (or my AMEX), so this new, mainstream device allows me digital access in and out of my home in a way that used to be reserved for an old analog key. Without question, I am a fan of the August Smart Lock Pro in terms of ease of use, its gorgeous industrial design, and how it makes life simpler. That pretty much sums up why someone starts assembling a smart home system.

You'll automatically be entered in the HTR Sweepstakes, and get the hottest audio deals directly in your inbox.
Subscribe
Connect withD
Login
Connect withD
0 Comments
Inline Feedbacks
View all comments
Author
Jerry Del Colliano
HomeTheaterReview Product Rating
Value:
Performance:
Overall Rating:
Check Product Price
When you buy through links on our site, we may earn an affiliate commission. Your support is greatly appreciated!
This is the static ad content. This is just a placeholder for now to get things styled.
Visit Website