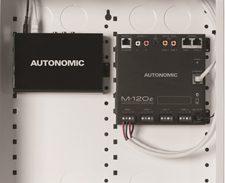 Autonomic has announced two new products that utilize audio-over-Ethernet technology. The new Mirage MMS-1e ($995, shown here) is a hi-res network music player that includes access to services like Pandora, SiriusXM, Tidal, Tunein, iHeartRadio, iTunes, and more. It features local HDMI, coaxial, and analog outputs, but it can also pass audio to the new M-120e four-zone amplifier via a single CAT-5e cable. Together, the two new products can deliver a two-stream/four-zone audio system for $1,995. The MMS-1e and M-120e will be available in September.

From Autonomic
Autonomic has announced the introduction of the MMS-1e whole-house music player and the M-120e four-zone amplifier, each featuring proprietary eAudioCast audio-over-Ethernet technology. This means that that the music player and amplifier can be connected using a single Cat5e cable at high resolution bitrates, no traditional audio wiring required.

Integrators will appreciate the flexibility to decentralize the placement of eSeries amplification, making it dramatically less difficult to bring high-resolution digital audio streaming into the most challenging zones. Most critically, the MMS-1e and M-120e each reside in a new compact form factor, enabling integrators to easily locate these components along with source devices anywhere in the home or in a traditional structured wiring enclosure.

The completely solid state MMS-1e music player represents a new entry level product for Autonomic that will broaden the opportunities for integrators to deliver Autonomic music solutions, particularly to those clients focused on enjoying streaming content throughout the home. The MMS-1e can be leveraged as a low cost single stream music player utilized as a standalone solution within a control system environment, or can be paired with an Autonomic eSeries amplifier, where its capacity doubles to provide two independent network streams of content. That means that the MMS-1e paired with the M-120e amplifier will deliver a two-stream/four-zone premium entertainment package at an affordable price point. And this solution is expandable via Ethernet to as many as 96 zones, enabling the user to grow their music system as their needs change while enjoying the same intuitive user interface they become accustomed to with the basic package.

The economical single stream MMS-1e retails at $995, and the two-stream/four-zone package starts at $1,995 MSRP. Anticipated ship date is September 2016.

High Resolution Output
The MMS-1e supports high-resolution audio, and the Japan Audio Society has certified the MMS-1e as a hi-resolution player with built in 24/192 DACs.

Integrates into all popular control systems
The Autonomic MMS-1e and M-120e can be used as a standalone entertainment solution or integrated into any of the popular home automation platforms as part of a larger smart home package.

M-120e amplifier
The Autonomic M-120e is a four-zone amplifier delivering 30 watts per zone. There is an analog RCA-style input for connection of a local audio device and a coax output for digital redistribution of audio inputs. An Infrared (IR) output enables connection of a remote keypad such as the Autonomic KP-6.