In Terms of Accessibility, the AV Industry is Getting Worse, Not Better

In Terms of Accessibility, the AV Industry is Getting Worse, Not Better

The disappearance of Windows control options and lack of accessibility standards are making it more difficult for home theater enthusiasts with physical disabilities to keep up with the rapid pace of technological change. 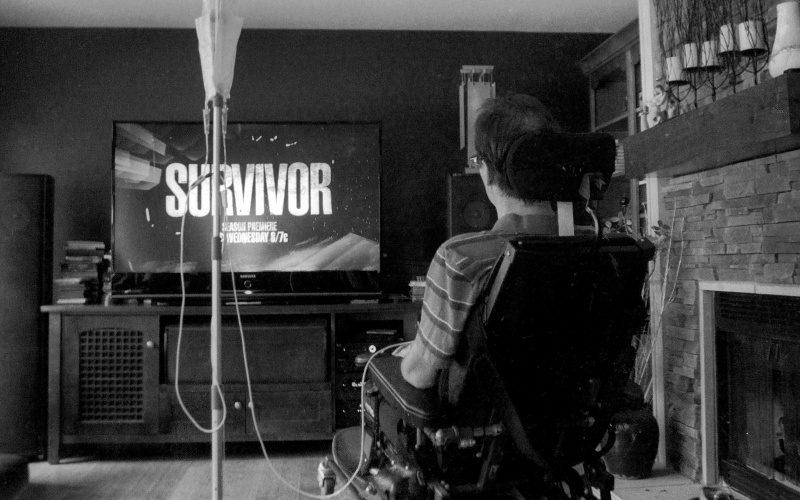 Imagine you have spent years, maybe decades, putting together the pieces of your reference music and home theater system. Your home is the go-to location for movie nights and album debuts. Imagine you've amassed such a library of your favorite music and video titles in the latest high resolution formats that it would take years of dedicated enjoyment to go through all of it without repeating a selection. Imagine you actually have the time to enjoy all this without distraction or competing priorities.

Now imagine entering your media room or home theater and not being able to turn any of it on.

The big black screen taunts you. Red standby lights glow stubbornly in the equipment rack, and row after row of album and movie discs look condescendingly down at you from their shelves.

This was precisely my situation as the effects of Amyotrophic Lateral Sclerosis (ALS, sometimes known as Lou Gehrig's disease) began spreading throughout my body. ALS is a progressive neuromuscular disease that causes paralysis of all muscles related to voluntary movement, including hands, legs, speech, swallowing, and breathing. It does not normally affect the cognitive parts of the brain, nor does it affect hearing acuity.

I have been a functional quadriplegic for more than a decade. There is no cure for ALS or any meaningful therapies, but until there is a cure, technology is the cure. I write, speak, use the internet, work with complex 3D modeling software, and control my environment through a computer that uses infrared light and cameras to track eye movements, moving the cursor around the screen and selecting objects. It is a pretty spectacular piece of tech.

With help from friends and sympathetic companies, I have ripped or recorded thousands of SACD and Blu-ray discs into dsf and m4v files on a network attached storage drive. My Marantz AV7701 preamplifier/processor is controllable through a web browser and 12 volt DC triggers turn on the amplifiers. Roon integrates my local music library with a TIDAL streaming account, and Plex powers my video library. I turn on my Vizio P65 TV and change source inputs with an infrared blaster on my computer, and I control a Roku Ultra with Roku's Windows app. For years I have been captain of my own entertainment ship, no longer reduced to asking someone to change a channel, load a disc, or, worse, having our daughter turn on a 27 Dresses marathon and leave the room without changing the channel. I have that script memorized.

Unfortunately, pieces of my carefully-designed entertainment ship are getting thrown off the poop deck or lost in the fog of obsolescence. For instance, I have not found an AV controller with Dolby Atmos sound processing that supports Windows control capabilities. Equipment manufacturers are embracing smartphone culture along with the rest of society, and device control apps are being written for iOS or Android, but no longer for Windows. Marantz, Denon, Yamaha, Vizio, Samsung, Rotel, Onkyo, Amazon Fire, and Roku are just a few AV industry giants that do not currently support control apps on the Windows platform. It may be obvious, but I can not use a smartphone, so the abandonment of Windows as a control platform is starting to limit my upgrade path.

You might, rightly, question why a company would support software for the needs of 35,000 Americans living with ALS, but people like me are a small part of the total market for more accessible control solutions. Various studies suggest that 0.4 to 0.6 percent of the population in the United Kingdom and the United States could benefit from a computer like mine. If extrapolated to include all of Europe and the US, that equates to roughly seven million people. The Christopher Reeve Foundation published a study finding that 5.4 million people in this country live with paralysis caused by illness, trauma, or accident. The Centers for Disease Control estimates that 24 million live with arthritis severe enough to restrict movement. Even more broadly, 25 percent of us will experience movement disability at some point in our lives, and 58 million Americans live with disability, making disabled people the largest protected minority group in the country.

In light of these numbers, a much more relevant question is: What are consumer audio/video equipment manufacturers, operating in a shrinking overall market, doing to make their products accessible to people with disabilities? In my experience, the answer to that varies widely. When Roku removed their control app from the Windows store last year, my chat boxes were deluged by people wondering what to do. Since the app still actually works (just no new installations or support), I repeatedly asked Roku if people with disabilities could request an as-is installation pack, no warranty expressed or implied. Their response so far has been to simply state they do not support Windows or to ignore me. I gave them an opportunity to comment for this article and they have chosen to not reply. Roku has a corporate Accessibility function, but it is located in their Legal Department, so you can guess their priority.

Amazon is a little different. I wrote to their online chat desk, explained I was a quadriplegic and could not speak or use a phone, and asked about control options. The support agent apologized that there was no Windows control app, then gave me a phone number to call if I had further questions.

I would kindly request that you go back and re-read those last two sentences again.

To Amazon's credit, they do have an accessibility product development organization, and have made progress in expanding the ways people can use their products (Fire tablets are getting a Switch Access function, for example, where software controls are highlighted in sequence and the user selects a control by activating a switch through a light touch or movement). Part of the problem is that the word "disability" is itself hotly debated and covers a broad swath of lived experiences, including atypical sensory, movement, cognitive, or behavioral functions. For example, one visually-impaired person might be able to use a screen magnifier while another needs text-to-speech, where device menu options are "spoken." Needs vary even in the small ALS world. The late physicist Dr. Stephen Hawking retained a tiny bit of movement in one finger that he used to activate a switch to click on screen elements, while I have no capability at all in my hands, but can move my legs. Smaller AV firms may not have the resources to make products accessible to all; even giants like Amazon and Google have pretty much prioritized their accessibility efforts to voice-activation, screen magnification, and text-to-speech. My eye tracking computer is great, but its voice output for "Hey Google" is not going to challenge my Theta Dreadnaught II if I have to answer the door during the helicopter rescue scene in The Matrix. Some companies have suggested I stream music from my computer over Bluetooth, but they go deaf and mute when I ask if they think compressing a DSD512 file through an aptX pipe is really an acceptable solution. It's not, at least not for me.

In my opinion, the accessibility lodestars are Microsoft and Sony. Microsoft integrated eye tracking capability natively into the Windows 10 operating system in 2017, lowering the cost of and expanding the market for the technology. The Xbox gaming platform has numerous alternatives for control usable by people with disabilities. They also have a seperate support desk dedicated to serving people with disabilities, with appropriately-trained staff.

Sony has led projects to set industry standards for text-to-speech functions for the visually impaired and for accessibility menu structures. They developed glasses that work with their TVs to overlay real-time text for the hearing impaired so people who can hear do not see closed-caption text. Sony integrates accessibility into the product development process, getting feedback from actual people with disabilities, and their Accessibility and Usability web pages detail what products have which accessibility features. On a more personal level, Sony helped me find solutions to my accessibility questions even when they did not involve Sony products. They more than earned my respect and future loyalty.

A century ago, families hid members with disabilities away in their homes, ashamed of the "defect" in their midst. We are certainly more enlightened today, and technology enables me to control my backyard smoker, lights, doors, thermostats, and manage websites. I can even sail a boat, by myself, on Lake Michigan, which does not exactly thrill my wife but might make her amenable to spending more on home entertainment. It is not unreasonable to expect a technology-driven industry like consumer AV at all price points to include the vast majority of people's capabilities in their product development and support programs.

Part of my fascination with this pastime is the large number of companies, many of them small businesses driven by aficionados like me, offering unique expressions of their version of entertainment bliss and driving the industry forward. The last thing I want is to stifle this creativity with accessibility requirements that only the mass-market players can meet. Why don't industry leaders come together to develop accessibility standards that reduce costs for all suppliers? Or, financially support open source projects that fill in accessibility gaps?

Perhaps the next time you plan to invest in another piece of your reference system puzzle, ask yourself and your equipment dealer or manufacturer how that device works if your eyesight worsens or your hands stop working. Start thinking about where your health or that of others in your household could be during your time with that equipment. Ask yourself if you would be happy watching a 65-inch black screen all day or if your laptop audio system is a reasonable permanent substitute for the fidelity of your main rig. For most of us, those answers are no and no, so let's work with the industry to include more of us in their product designs.

You'll automatically be entered in the HTR Sweepstakes, and get the hottest audio deals directly in your inbox.
Author
Steve Heronemus
When you buy through links on our site, we may earn an affiliate commission. Your support is greatly appreciated!
This is the static ad content. This is just a placeholder for now to get things styled.
Visit Website