Terry London reviews the Rhumba 1.1 stereo preamp from Backert Lab, which delivers much of the performance of the higher-end Rhythm 1.1 at less than half the cost. 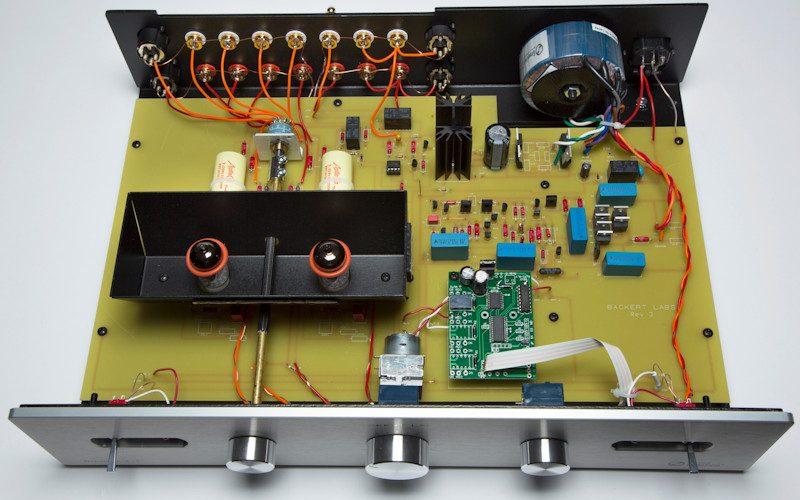 About a year ago, I wrote a review on the Backert Labs Reference Rhythm 1.1 stereo preamplifier. Based on its price and level of performance, it was one of the best preamplifiers I have ever had the pleasure of listening to in my home systems. In November 2015, I received a phone call from Andy Tebbe, President of Backert Labs of Pennsylvania, informing me that they were coming out with a new model called the Rhumba 1.1, which would retail for $2,995. Tebbe said that the new preamp would come very close to the performance of the Rhythm 1.1 but for less than half the price. Of course, I was very interested in reviewing it to see if Backert Labs could match the gold standard performance of its much more expensive reference preamplifier at half the price.

The Rhumba 1.1 has a silver faceplate, measures four inches high by 17 inches wide by 12 inches deep, and weighs 16 pounds. On the front left side, you will find a toggle switch for muting and three knobs for source, volume, and balance; to the right is an on/off toggle switch. Each toggle switch has a red or green LED signal to indicate if the preamplifier is turned on and if the mute is engaged or not. Around back are the IEC input, an XLR input and output, three RCA inputs, and two RCA outputs. The Rhumba 1.1 also has a home theater bypass setting. Just like the Rhythm 1.1, the Rhumba 1.1 is beautifully built and has a much more expensive appearance that its price would indicate. The heavy aluminum remote, which only controls volume, was a joy to use because it is very precise, allowing me to easily make minute volume changes without overshooting the exact setting I desired.

The Rhumba 1.1 and Rhythm 1.1 both use the same circuit design and the patented Green Force power supply. The difference between their power supplies is that the Rhumba 1.1 uses polypropylene capacitors instead of the much more expensive Teflon capacitors used in the Rhythm 1.1. The polypropylene capacitors are still superior sonically to the electrolytic capacitors normally used in audio power supplies. The Rhumba 1.1 uses a pair of 12AU7 tubes. The transparent access door is located on top of the preamplifier, making tube rolling easy and convenient. Just like the reference Rhythm 1.1, the Rhumba 1.1 is so quiet and transparent that, with any NOS tube I rolled in, I could hear what type of color or timbres that tube had to offer in seasoning the overall system sound.

In addition to using the same reference gear to compare the Rhythm 1.1 and the Rhumba 1.1, I made two strategic decisions in order to see if there would be a significant sonic difference between the two preamps. Because I favored the NOS tubes (RCA triple mica black plate 5814) when auditioning the Rhythm 1.1, I used those same tubes to audition the Rhumba 1.1. Secondly, I used the same musical selections.

Paul Simon’s album Graceland (Warner Brothers) is not one of the best recordings when it comes to clarity and overall dynamics. However, just like with the Rhythm 1.1, the Rhumba 1.1 managed to pull the micro-details out of the hazy mix better than any other preamplifiers I’ve used. I was pleasantly surprised to discover that the Rhumba 1.1 has the same sonic virtues as the much more expensive Rhythm 1.1 when it comes to overall speed, PRaT, and lower-frequency power/drive.

I used Bill Holman’s big band jazz album Brilliant Corners (XRCD JVC) to see how the preamp would handle soundstaging, layering in the soundstage, and location of individual players in the band. The Rhumba 1.1 was a clone of its much more expensive sibling in this area; it, too, created a tremendous lifelike and three-dimensional soundstage with excellent location of instruments.

My final musical selection was the great bassist Charlie Haden’s live recordings from The Private Sessions (Naim), which I used to see how the Rhumba 1.1 would handle the tonality/timbres of the acoustic piano, saxophone, drums, and Haden’s rich, full-bodied bass instrument. Similar to the Rhythm 1.1, the Rhumba 1.1 was totally devoid of grain, creating a beautiful density of color with a silky-smooth liquidity that lost none of the little details in this intimate music.

High Points
• The Backert Labs Rhumba 1.1 preamplifier is hand-built in the U. S. to a very high level of build quality and uses innovative strategies in its design.
• This preamp is very fast and powerful in its presentation and gives a solid rhythm foundation to any music played through it. It also has virtually no noise floor, so all of the micro-details can be easily heard.
• The Rhumba 1.1 has a home theater bypass option.
• This preamplifier is a tube roller’s delight. The top access door makes changing tubes very easily, and the transparency of the preamplifier allows you to hear different tubes’ sonic signatures clearly in your system.
• Its very attractive appearance allows it to fit right in with any system, no matter the cost of the other components.

Low Points
• Like any other tube-based gear, the Rhumba 1.1 will have to have its 12AU7 tubes replaced in the future. However, because it runs the tubes very gently, you can expect a long time span between replacing tubes. Years, for most users, one could expect.

Comparison and Competition
In the Rhumba 1.1’s competitive price bracket, two comparable preamplifiers would be the PrimaLuna DiaLogue 3 (retailing for $2,599) and the Triode Corporation TRX-1 (retailing for $3,200). The PrimaLuna DiaLogue 3 came nowhere near the sonic league of the Rhumba 1.1 in the areas of micro-detail rendering see-through transparency; the Rhumba 1.1 also has much more explosive, powerful dynamics and better overall “kick” and pace. The Triode Corporation TRX-1 was a closer competitor to the Rhumba 1.1 in the areas of pace, timing, and overall punch. However, when it came to the finesse of micro-details and overall tonality/timbres, the TRX-1 lagged far behind the Rhumba 1.1.

Conclusion
When I reviewed the Backert Labs Rhythm 1.1, I considered it a bargain at its $7,500 price tag because it offered at the same level of build quality and performance as my reference preamplifier that retails at $24,000. As far as I can tell after a lengthy review process with the Rhumba 1.1, the Backert Labs team has built a preamplifier that is at least at the same level of performance as its big brother in the areas of speed, dynamics, pace, micro-dynamics, accuracy, and beautiful tonality/timbres. If the Rhythm 1.1 was a bargain, then the Rhumba 1.1, priced at $2,995, can be considered to be the best deal in high-end gear for the 21st century. To go along with its stellar sonic performance, the Rhumba 1.1 looks and functions at a level that you expect from a much more expensive piece of gear.

With the Rhumba 1.1, Backert Labs may have shot itself in the financial foot by building a preamplifier that, I believe, is a sonic clone for its wonderful reference Rhythm 1.1 for $3,500 less. However, I greatly appreciate that the company has the ability to bring this kind of performance and build quality to a price point where many more music lovers will be able to purchase it for their systems.