Terry London explores the Rhythm 1.1 stereo preamplifier from Backert Labs. This tube-based preamp includes a self-biasing circuit and easy-access tube door on the top panel that makes it very easy to experiment with different tubes. 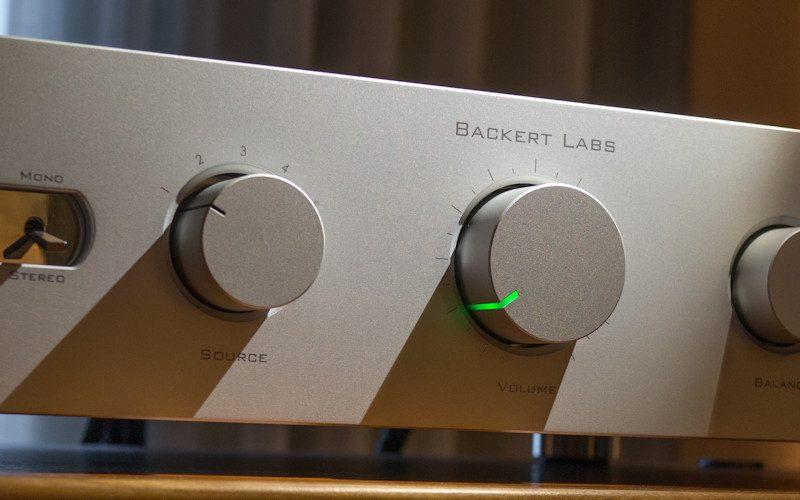 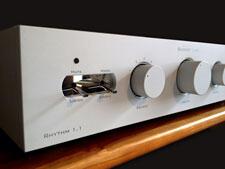 Just as Dan Wright of ModWright Instruments built his reputation on the West Coast by his superior modifications of different pieces of other companies’ gear, Bob Backert, located in Pennsylvania, also became well known and respected on the East Coast, over a 20-year time span, for his modifications of different high-end audio gear. He finally decided to start his own company, Backert Labs, because he strongly believed that he had come across some significant new and innovative ways of building a tube-based preamplifier. This led to the Rhythm 1.1, which is the subject of this review.

Three of the innovations found in his new preamplifier, which retails for $7,500, are the use of Teflon capacitors in its power supply, no aluminum electrolytic capacitors anywhere in the unit, and finally a circuit that automatically biases the tubes in real time, thereby optimizing the performance of any tubes you use in the Rhythm 1.1 preamplifier.

The Rhythm 1.1 preamplifier arrived in a thick double box with cut foam inserts that completely protected it during shipping. Its dimensions are four inches high, 17 inches wide, and 12 inches deep, and it weighs 21.5 pounds. On the front panel going from left to right are: two toggle switches for muting and stereo/mono; three knobs for input selection, volume, and balance; and finally, a single toggle switch for turning the amplifier on and off. An embedded green LED on the volume control shines when the preamplifier is turned on. Behind the preamplifier are two outputs and five inputs, which are all RCA single-ended, and the IEC input. The Rhythm 1.1 comes in two color selections: black and silver. Beautifully built and hand-crafted, the Rhythm 1.1’s exterior appearance is comparable to a much more expensive reference-level piece. Its chassis has no exposed screws or ventilation slats. The heavy aluminum remote adjusts the volume but does not change input sources.

The tube access door is located on the top left side. Since the Rhythm 1.1 only uses one pair of 12AU7 tubes and magnets instead of screws, the task of tube rolling is very easy and hassle-free. Because the preamp is so transparent and quiet, it allows the overall texture and tonality of the tubes to flavor the sound. This made tube rolling quite enjoyable and allowed me to get the exact overall sound I wanted with different amplifiers. My favorite tube, with both the Pass Labs XA-60.8 mono blocks and First Watt SIT 2 amplifier, turned out to be NOS RCA triple mica black plate 5814 tubes.

One musical selection that demonstrated the many sonic strengths of the Rhythm 1.1 was Paul Simon’s classic album Graceland (Warner Brothers). Despite the album’s lack of clarity and overall dynamics in its recording, the Rhythm 1.1 was better able to clearly expose micro-details than any other preamplifier I have ever used. Additionally, the performance of the lower end, along with the percussion instruments, was more powerful and dynamic, making the music come to life. This preamplifier has excellent speed/transparency, which allowed it to produce all the micro-details in the music without losing the body and bloom of both voices and instruments.

Bill Holman’s big-band recording of Thelonious Monk’s Brilliant Corners (XRCD JVC) continues to be one of my favorites. If a preamplifier is up to the task, Holman’s big band should spread left to right, having a very large soundstage, great layering, and excellent depth. Also, each player’s location in the band should be very apparent to the listener. The Rhythm 1.1 created the illusion of a tremendous, life-sized, three-dimensional soundstage; the band appeared to be playing in my large acoustic space.

To conclude my audition, I played the late, great bassist Charlie Haden’s live recordings from The Private Sessions (Naim), held in small venues for his friends and family members. The quartet also included tenor saxophone, piano, and drums. The timbres, tonality, and high sonic quality of this recording was reproduced by the Rhythm 1.1 with a beautiful density of color, along with a silky smooth yet detailed resolution. It was totally devoid of grain and offered a high degree of liquidity and ease to Haden’s music.

High Points
• The Backert Labs Rhythm 1.1 preamplifier is very fast and accurate, with a very low noise floor–allowing it to create tremendous macro-dynamics and render music in a natural way.
• Because the Rhythm 1.1 is so quiet/transparent, it allows you to clearly hear the different textures and timbres/tonality of different tubes with which you might experiment. The unique design of the tube access door makes this experimentation a very convenient and enjoyable process.
• This amplifier is hand-built with exceptional quality, and many innovative strategies were used in its design.
• The striking appearance blends a retro-industrial look with a modern design. Another detail to its craftsmanship is that it has no external screws or ventilation slots, which adds to the sleek look. Overall, it would a very attractive addition to any system.

Low Points
• The Backert Labs Rhythm 1.1 preamplifier does not offer a home theater bypass.
• Like all tube-based pieces of gear, this will need its 12AU7 tubes replaced in the future. However, because of how it auto-biases, you can expect these tubes to have a longer life span.
• It only offers RCA single-ended inputs and outputs. Therefore, if you only run XLR balanced cables, you will have to get adapters to use this preamplifier.

A final comment that would speak to both the value and performance of the Rhythm 1.1 is that, when I compared it with two other preamplifiers whose prices are valued at $24,000 and $30,000, the Rhythm 1.1 not only held its own against these highly regarded preamplifiers, but it was definitely in their league in its overall performance.