Bang & Olufsen releases a product that helps the company support the era of digital music: the BeoSound 5 Encore digital music system, which features plenty of features to satisfy any user. 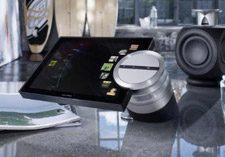 The BeoSound 5 Encore is Bang & Olufsen's plug-n-play answer to a growing demand in the era of digital music, as it allows for access of one's music library without a complicated navigation process. BeoSound 5 Encore acts as a sound hub with content arranged by album, artist, track, or 'favorites' category. It can be used as a stand-alone audio system or in a multi-source/multi-room application.

In addition to internet radio, BeoSound 5 Encore can browse and play music from a variety of sources; a connected hard disc, a NAS server, a computer, a USB stick or a handheld device. It also supports music in lossless quality.

The customer can connect up to eight BeoSound 5 Encores to the same server, with the added benefit of being able to play different music content in different rooms at the same time.

BeoSound 5 Encore features a 10.4" full graphical display and a wheel that scrolls through music collections.

The patented MOTS 'More of the Same' algorithm is a Bang & Olufsen technology. It reportedly captures the musical identity of a track and then builds a playlist of similar music - based on parameters such as sound, dynamics, and rhythmic aspects of a particular track.

The BeoSound 5 Encore will be available for purchase in all Bang & Olufsen showrooms in August 2011. It retails at $3350.00.