Based on a recent survey done in conjunction with Parks Associates, the CEA anticipates that 20 percent of broadband-equipped households intend to buy one or more smart home devices within the next year, with smart lights and smart thermostats sitting... 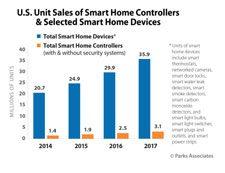 Based on a recent survey done in conjunction with Parks Associates, the CEA anticipates that 20 percent of broadband-equipped households intend to buy one or more smart home devices within the next year, with smart lights and smart thermostats sitting atop the shopping list. Currently, 13 percent of broadband households own at least one smart device.

From BusinessWire
A new survey released today by the Consumer Electronics Association (CEA) and Parks Associates shows continued strong growth of smart home products in U.S. homes, as 20 percent of households with broadband intend to acquire one or more smart home devices within the next year. According the study Internet of Things: Smart Home Devices and Controllers, which examines the marketplace for smart home devices and systems, half (48 percent) of those surveyed who own a smart home device are under 35-years-old.

Smart home devices and systems have processing intelligence and are connected to the Internet through a home network for remote access, monitoring, and control capabilities. While 13 percent of broadband households own at least one smart home device, the survey found unit sales of devices like smart thermostats, door locks, smoke detectors, and light switches will continue to offer high growth rates. In 2014, these types of smart home devices will reach 20.7 million units; increasing to 35.9 million units by 2017.

"Now is the time for the industry to deliver on the promise of better, easier-to-use products, systems and services to help consumers manage their homes," stated Tricia Parks, CEO, Parks Associates. "Roughly one third of smart device owners spent more than one month shopping around. Manufacturers and service providers must engage and educate the consumer during that purchase process if they want to capture them."

According to the research, consumers have the highest intention to purchase smart lights (16 percent) and smart thermostats (16 percent). Overall, nearly two thirds seek to purchase a smart device that will communicate with another smart device. As the number of smart devices in a household increases, so does the importance of interoperability - 60 percent of owners with three or more devices find interoperability very important.

The point of purchase varies, but a majority of smart devices are bought through a retailer or given as a gift. Smart door locks (27 percent), smoke detectors (25 percent), and garage door openers (24 percent) were the most gifted smart home device. Smart door locks (38 percent), home or kitchen appliances (34 percent), and power strips (33 percent) were the smart devices most often purchased from a national or local retailer.

Where Are Smart Home Shoppers Buying Their Devices?