This beautifully made turntable defines the very essence of what analog sound is all about. Stunning in looks and performance, the Basis 1400 can be the beating heart of an exemplary analog system even though it is Basis least expensive offering. 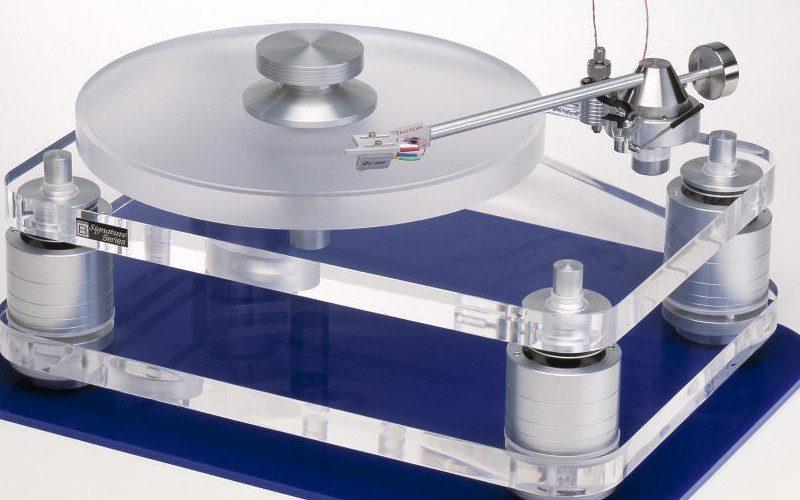 Horrifyingly, we're only one month shy of it being 10 years since I reviewed the Basis Debut turntable. Good Gawd, does time fly! In the past decade, the LP has continued to decline in sales, popularity and importance, but enough vinyl freaks survive to support a few stalwart manufacturers. So what happens to those who - unlike Linn, Pink Triangle and Rega - do not manufacturer amplifiers, speakers or CD players? While Basis hasn't abandoned the costly Debut (which now has a moniker along the lines of 'Debut Gold MK V' or some such), the company has responded to the havoc wreaked by CD with turntables way, way down the price ladder. Oh, and making world-class espresso machines... but that's another story.

Like Clearaudio in Germany, Basis developed a series of turntables which can be upgraded periodically, eventually evolving from the entry-level 2000 into the one-below-the-Debut 2800, with a sticker of £7900. Indeed, for the better part of a year I've been using a bog-standard 2000, which sells here for £1995 with Basis' version of the OEM edition of the Rega tonearm. But, given the brilliance of the sub-£1000 Wilson-Benesch Circle, it was clear that even the top value-for-money offered by the 2000 wasn't a low enough tariff for those who have to satisfy an analogue craving with a less-costly fix. So it was without hesitation that I put my name down for a review sample of the Basis 1400, to see just how inexpensive could be the entry into Basis ownership.

Given so many similarities, the 1400 struck me initially as a 2000 in clear, rather than black perspex. But closer examination reveals other detail changes, the most obvious being that the 1400 is a locked system, with no upgrades available and no path up to the 2000 short of selling or trading in your 1400. Like the 2000, the 1400 is minimalist, compact and absolutely uncluttered. Its primary parts consist of a clear acrylic main chassis, sturdy brushed aluminium legs, a matt-finish acrylic platter reminiscent of Pink Triangle's and an outboard motor assembly. The latter, it should be stated, is identical to those used in every Basis model up to and including the Debut, so the 1400 isn't simply some cheap, badge-engineered Basis wannabee. But the main bearing of the 1400

Using the Rega-sourced Basis 300, surely the best-value tonearm on the market, means a slight savings for UK customers because the British importer was allowed to take delivery of the Basis-branded arms directly from Rega instead of watching them fly round-trip to New Hampshire. To UK music lovers, it's embarrassingly but deservedly familiar, with its black arm tube and natural metal cueing lever, counterweight and lower arm pillar. But there's one difference which will bring smiles to all those who know how much Rega disputes the need for concerning one's self with such a minor, insignificant detail as VTA: Basis provides a custom arm-mounting arrangement for its versions of the assorted Rega OEM models to allow for VTA adjustments. Additionally, the arm says 'Basis' on the arm rest, below the pivot, to complete its aesthetic appeal.

With main measurements of 430x302mm, the Basis 1400 ignores the trend toward enormous turntables unsuitable for most equipment stands, or in need of dedicated tables. If you must go smaller, Wilson Benesch's Circle or any of the Regas are viable alternatives, but the Basis is no sufferer of elephantiasis. It still adheres to the 430mm 'rule' which has pretty much determined the way hi-fi is housed (not unlike cookers, washing machines, etc, enjoying a standard under-the-counter height of 900mm to make life easier). However, you still have to allow enough shelf space beyond the main dimensions for the motor assembly, with a footprint of a 75x75mm and standing 100mm tall to make the pulley level with the platter.

Here's where you detect another detail change from the 2000: the 2000 features a cut-out along the back edge of the plinth in which to position the motor assembly. It's purely there for convenience, but a nice tough which shows why you pay more for a 2000. As you can tell, only the drive belt connects the motor assembly to the turntable, thus ensuring total isolation from motor-borne vibration for the bearing-platter-LP-cartridge-tonearm loop. As a result, the Basis 2000 system is deliciously quiet during operation. (Nit-pickers will point out that the motor assembly can interfere with the turntable through the shelf material on which they're both resting. In the interest of total paranoia, I would point out that one could, if one wished, rest the motor assembly on another stand...)

Enough freedom is built in to allow you to position the motor assembly behind the turntable or to the left, the latter advisable because the motor assembly also contains the on/off button on its top surface; positioning to the side makes it easier to reach in most situations. On the other hand, positioning it to the rear looks a lot nicer and means that you need a shelf only 430mm wide, if 75mm deeper than the plinth's 302mm. At the top of the motor assembly is a two-step pulley for manually raising or lowering the belt to choose 45 or 33 1/3 rpm. The belt is flat and it never drifts at all, once the motor housing is in place and spaced away from the chassis by exactly 4.5mm - the width of the belt.

Set-up is foolproof and straightforward, the detailed instructions outlining the procedure for the user to fit the bearing housing, inserting the platter/bearing assembly and mounting the arm. Because it lacks a suspension, levelling the 1400 involves nothing more than screwing the feet up or down as required. It's also worth noting here that the 2000 rests of four supports, where the 1400 uses only three. And we all know which is easier to level, so score '1' for the 1400 over the 2000.

If the lack of suspension upset those who swear by the isolating properties of a suspended sub-chassis design, note that the pillars feature spongy feet which provide some de-coupling. On the other hand, the 1400 - like the 2000 - responds instantly to after-market tweaking. I used the 1400 on a Hi-Fi News Newsstand equipment rack, weighed down with McIntosh 275 and Dynaco Stereo 70 tube amplifiers on its lower shelves. The Basis puck certainly enhanced the performance enough to suggest that it should be a mandatory purchase, but experimenting with mats proved to be a waste of time.

It was the same with the 2000: after I tried thin foam, felt and sorbothane mats, I reverted to the bare platter, which seemed to cause less deadening of the sound. However, I did say that the 1400 responds to tweaks, so the effects of the add-on mats are clearly audible. Who knows? You might prefer the sound with an extra layer between LP and platter. Oh, and I didn't have a RingMat handy, so please don't rule it out on my say-so. Oh, and don't forget that the world is full of turntable platforms to try during those odd hours when you're not actually listening to music.

Because I had such good fortune with the Grado's wooden-bodied Platinum cartridge (the least expensive in their Reference range) in the 2000 with Basis 300 arm, I stuck with it for the 1400. This was fed into NAD's dirt-cheap phono stage, so we're talking about a complete front-end for around 1500 depending on your haggling skills. In keeping with cost levels consistent with the Basis, I opted for playback through Roksan's Caspian integrated amplifier, driving Quad 77-10Ls, but I also went for a spin with the Unison Research Mystery One pre-amp, GRAAF 5050 power amp and Quad ESL63s.

Unfortunately for Basis, the 1400's performance is nearly identical to that of the 2000, something I was able to ascertain with side-by-side auditioning. As was the most compelling virtue of the 2000, the 1400 is the sort of turntable which so oozes analogue warmth that it reinforces anti-digital sentiments. Where I had the opportunity to play LP vs CD, the latter sounded discernibly cold and harsh, even when using CD players noted for their aural benevolence. Transparency was marginally better with the 2000, as was its lower noise floor; these must surely be by-products of the superior bearing assembly.

Absolute transparency and noise floor aside, it was hard to tell the two apart, the 1400 aping the dearer deck's rich midband and clear treble. It makes the Basis 1400 something of a treasure, then, for those who recognise the total superiority of 1950s Capitol LPs over all other vocal recordings since the dawn of musical storage. Particularly rewarding is the way the 1400 deals with fine detail, especially vocal textures, the myriad types of sibilance and assorted, chest-related artefacts.

Also like the 2000, the Basis 1400 is a bit shy when it comes to jackhammer transients in the lower registers, but then neither could the W-B Circle nor any of their belt-driven, suspended sub-chassis rivals. Yes, it's odd noting a softening down below in a product manufactured by the creator of the Debut, which is undeniably a champ in this area. But you'll only notice it if you still have playable copies of Eddy Grant 12-inchers or Diana Ross' 'Muscles' in the one-foot-across edition. Note, though, that removal of the puck worsens this condition, so don't even think of using the 1400 sans centre weight.

Burning in the back of your mind is the question, 'Can I live with the 1400's lack of upgrade potential, or should I bite the bullet and buy a 2000?' Let's put it this way: Beyond what's between you and your bank manager, the reason for buying a 2000 is a lack of immunity to upgrade-itis. The 1400 is so good, so coherent, so confident that, like the slightly softer-sounding but livelier Wilson-Benesch Circle, it may be all you'll ever need from a turntable. What's so reassuring is that, with the Basis 300 arm, it'll do justice to Lyras and Transfigurations and cartridges costing as much as the deck and arm combined. It will never embarrass your LPs. It has no rough edges, physically or sonically. It's a open invitation to a tweaker's limitless GBH. And it looks so handsome that you're gonna be looking for the Michell badge.

Or a higher price tag.