It's a name from the past, but with 30 watts, an incredible frequency response, and an impressively low THD for a tube amp, the DL7-35's performance belies its 40th anniversary status. 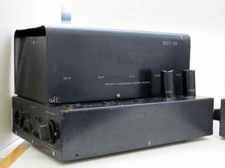 Elder tubies delighted with the news that the name 'Beam-Echo' has been revived need wait no longer for proof. The reincarnated constructor has re-issued the Avantic DL7-35 monoblock power amp as its debut product, marking the amplifier's 40th anniversary, and the results have exceeded all expectations. Even if it ain't quite an exact replica...

If you've been following the strange but wonderful series of amplifier resuscitations, then you've observed the reappearances of such diverse treasures as the Radford ST-25, the McIntosh MC-275 and C-22, the rare, Japan-only Marantz Model 7 pre-amp kit and the odd Dynaco. In every case, changes have been made internally to account for the passage of time and its effect on parts availability, or to address other modern requirements. Also in nearly every case, the aesthetics were left alone. One thing's for certain, though: the spiritual predecessors to this latest Lazarus were either limited editions or kits with limited distribution. The 'new' Beam-Echo is to be treated as a valid, modern valve amp, not just a bit of nostalgia, so there's no threat of a pre-planned, finite production run.

Hence Stuart Perry and Richard Hussey's considered alterations away from the original, with the reassurance that 'the basic circuit' has been left unadulterated. A genuine 1956 DL7-35 is a typically cubist, wholly utilitarian lump devoid of any real style. It could be any one of a hundred 1950s amplifiers. The new version, on the other hand, is an aesthetic pastiche of the same decade's styling touches, battleship paintwork and wooden end-cheeks and angular folded steel and diagonal ventilation slots and a period badge, the resultant creation being a 420x260x200mm chunk of anachrophilic fantasy. It's like one of those cars that you drew when you were twelve years old and daydreaming in class, a confection combining bits of Morgan, Triumph, Jag and MG into some eclectic mass which screamed 'vintage sports car'. This time, it's dream hi-fi rather than cars and someone else has done the work for you, throwing in the added bonus of a genuine pedigree.

According to legend, the original was a commercial version of the Mullard 520 20-watter designed based on research by Mullard engineers into the characteristics of the EL34 and EF86 valves. And it was certainly a hit in its day. The great Percy Wilson said, "I have never heard anything I liked better", high praise indeed when you see what else was available through the pages of a 1956 Hi-Fi yearbook. Donald Aldous stated, "I cannot fault it." (I'd quote, too, from a contemporary review in HFN/RR, but the reviewer said nothing you wouldn't have found in the brochure.) So expectations were high then and are just as high now.

Classic in every sense of the word, the Avantic is rated at 30W, with a frequency response of 5Hz-30kHz. The input sensitivity is 280mV for rated output and – at 20W – distortion is said to be less than 0.05%, mighty specs for an aged valve design. Hum and noise is -85dB at the same rating, confirmed by the amplifier's unvalve-like silences. Designed to work best with 8 or 16 ohm speakers, the taps on the back provide for both. The valve complement (per channel) includes two of the aforementioned EL34 output tubes and an EF86 for the input, plus an ECC83 acting as a phase splitter and a GZ34 rectifier.

Inside, a PCB carries 1% carbon film high stability resistors in the signal path and 1% metal film devices in the HT circuit. On the underside are the capacitors, including 1kV polypropylene types in the signal path and 105deg C electrolytics for the HT section. For those who don't believe that the aesthetics are the only changes to the Avantic, the circuitry mods include only the selection of modern high-spec components and a modern PCB. OK, so it's not hardwired throughout, but this fledgling firm opted for greater reliability, easier manufacturing, better consistency and higher mechanical stability. The output transformers are still hand-wound, with split sandwiched windings.

Outside, it's 16 gauge mild steel shaped by a laser cutting process, the sheet then bent to shape. The top and end plates are milled from solid aluminium. That gorgeous period finish consists of etch primer followed by four coats of a cellulose-based hard metallic paint, colour-matched to an original DL7-35 using a laser colour-comparator, the paint mixed exclusively for Beam-Echo. That sexy badge? Half-millimetre copper sheet, with the artwork silk-screened onto it. The end pieces are solid oak, the knobs are machined from solid aluminium and the dark blue of the review sample is but one colour on offer. Also anticipated as choices for the discerning customer will be gold and 'Ferrari Red', the latter which should prove quite fetching if possibly over the top.

Read more about the Beam Echo on Page 2.

There's little to describe about the DL7-35's operational features and fittings because this is, after all, a power amp and not a pre-amp. 'Plug it in and switch it on' is pretty much all that you can do. Yet what I'm about to describe might prove invalid if my hectoring of Stuart Perry has succeeded. For reasons which I will get into in a second, Beam-Echo has fitted a volume pot to one end of the DL7-35. For symmetry, the other end features an on-off rotary with identical looks. Indeed, the only reason for placing the on-off control there instead of on the back is for visual balance. But I pray that he ditches the vile, nasty – nay, useless volume control. It's crude. It barely works. It aids the listener in no way I can detect, because it offers no adjustment: it's full on or nothing.

Perry told me it was to ensure that owners of pre-amps without balance controls had some method of fine-trimming the levels. So, says I, you've compromised a stunning product to address those sad, purist bastards who think that any controls beyond source select and level are the devil's own? You mean that you're pandering to less than 0.0001% of the universe? Well, says I after he nods, try wrapping your mind around this one: since most people who own monoblocks tend place them near to each speaker to exploit the option of ultra-short cable runs, how convenient is it to get up and adjust one amp, then go back to the listening seat to check the level change, only to have to get up again to walk to the other speaker, etc, ad nauseum. And, says I, doesn't the forthcoming, matching SP-21 pre-amp have a balance control or its own?

So, says I, why worry? Assume that most people will opt for the matching unit. Which they will do if it's even half as good as this beauty.

Sadly, I had no SP-21 to try with the DL7-35, but I did have to hand the astounding Trilogy 900 and the heartbreakingly wonderful GRAAFiti WFB Two, both of which are entirely tubed. Also used were the Marantz CD63SE fed in directly and also via the Audio Alchemy DAC-In-the-Box plus Theta TLC, the Marantz CD-12, my pet Onkyo portable and the Sony Walkman Professional. Speakers? I was lucky enough to have the Beam-Echos around for use with the Bolero Kompakt, the Apogee Ribbon Monitor and – to test the 16 ohm taps – Rogers LS3/5As. So, although the Avantics cost 2850 per pair, I used them with 500 and a 1300 pre-amps and CD players from around 200 on up; the dearest speakers were circa 1k. Then again, all are champions performing way above their price points, and one or two combinations proved magical.

Make no mistake: ribbons like tubes and the sound of the Avantics through the Apogee Ribbon Monitors was sweeter than a Shirley Temple flick. It was one of those odd pairings that worked so blissfully well. The speakers were sensitive enough to work with 30W, while the amps were hauiry enough to deliver real bass, to exert ample control and to exploit the tweeter without exciting it into frenzy. Particularly revealing were too-delicate tracks of the unplugged, British folkie variety, and female vocals of unbearably emotional yet fragile content: thank you, Sheryl Crow.

It's where tube warmth just can't be bettered, expecially if realism is your goal. With all three of the speakers I used, the DL7-35 demonstrated time and again a talent for placing the sounds just in front of the speaker line without dropping the images in your lap. Odd, but it was forward without being intrusive. It was a case of intimacy without a lack of propriety, sort of the way you'd expect an overly-mannered yet randy British debutante to have behaved in the 1950s. (This analogy cannot be updated, as there are no more debs. Besides, nowadays it'd be blow-jobs all round.)

Dual-mono amplification, or true monoblocks as in this case, should be crosstalk-free and so they were, resulting in a wonderfully cohesive left-right/front-to-back soundstage of impressive dimension and stability. The real test? Mono. I went through some Fifties treasures from Perry Como, the Chordettes and others to find that you can't beat single-channel recordings played back on equipment of the right vinatge. Even if it's stereo gear.

Which is not to say that the Avantics are going to conjure
up images of MacMillan and Tommy Steele and St Trinian's films. Perry and Hussey have done what the most successful of the re-animators have done: used the past to create something wonderful for the present. This is well-tempered modernity, and it works, and I can't wait to hear how the DL7-35 sounds with Mk I Quad ESLs.

If you want totally vintage sounds, go the second-hand amp route. If you want to find a friendly spot inbetween the two, you'd better join the queue. Just make sure that you order yours without that damned volume control.