TechCrunch is reporting that Beats by Dre has introduced its first new headphones since officially being acquired by Apple. The new Solo2 on-ear Bluetooth headphones carry an MSRP of $299.95, while the "Royal Edition" of the wired Solo2, with new... 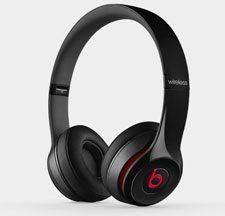 TechCrunch is reporting that Beats by Dre has introduced its first new headphones since officially being acquired by Apple. The new Solo2 on-ear Bluetooth headphones carry an MSRP of $299.95, while the "Royal Edition" of the wired Solo2, with new color options and a satin finish, will be priced at $199.95.

From TechCrunch
Beats by Dre is launching a new pair of headphones today, a Bluetooth-powered wireless version of the Solo2 headset it introduced back in June this year. The wireless edition was tipped by an FCC document last week, but now it's official, with a $299.95 price tag when it goes on sale later this month at Apple.com and select online retailers. Beats is also launching a new 'Royal Edition' variant of their wired Solo2, which includes new color options and a satin finish, priced at $199.95.

The new Beats products launching today are the first to debut since Apple officially closed its acquisition of the music hardware and software company back in August. New products, including the original Solo2, had been introduced after Apple announced its intent to acquire, but this new hardware is the first to launch after all the paperwork has been signed and approved.

The Solo2 Wireless features the same on-ear design of the Solo2, as well as the same color options, while Bluetooth is included for wire-free connectivity to your devices. The Solo model (all versions) currently lead the global headphone market, according to NPD group market research data, and Beats is looking to capitalize on that success with wireless control in order to continue to grow its Bluetooth headphone market share.

Additional Resources
• Apple to Acquire Beats at HomeTheaterReview.com.
• Get more details on the new models at the Beats by Dre website.