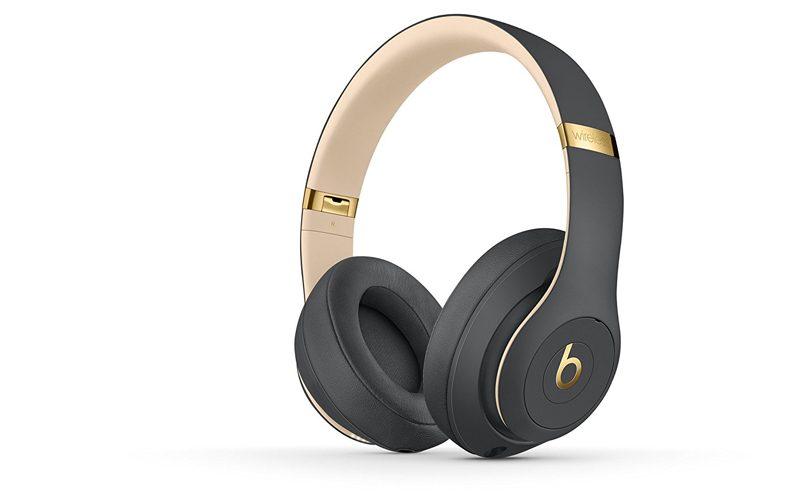 Audio Reviews, Equipment Reviews, Headphone + Accessory Reviews
Published On: May 30, 2018
We May Earn From Some Purchases Via Affiliate Links

I will never forget hearing my first pair of Beats headphones many years ago. They were all the rage in a kiosk in a Monster Cable booth at CES. It was a self-serve demo of the headphones, which had an...

I will never forget hearing my first pair of Beats headphones many years ago. They were all the rage in a kiosk in a Monster Cable booth at CES. It was a self-serve demo of the headphones, which had an aesthetic resembling that of a Michael Jordan Nike shoe. Our former editor went first, and I’ve never seen him make such a face or peel a pair of headphones off his dome so quickly. As he cursed and fussed, I suddenly felt compelled to get the demo–just like when a waitress puts my meal in front of me and says, “Don’t touch the plate–it’s hot.” Lady, now I gotta know just how hot the plate is, you understand? What I heard next was simply unforgettable. The bass. Oh, sweet Jesus, the bass was so overdone. There was no balance. I, too, peeled them off quickly and instantly dismissed Beats by Dre as headphones designed for people far more interested in making a fashion statement than in getting accurate, engaging music playback.

Roll the tape forward nearly a decade, and Beats by Dre is sold to almighty Apple Computer for $3,000,000,000, making investors like Dr. Dre, Jimmy Iovine, and others fabulously wealthy and cementing the commercial success of the Beats brand. Apple saw an opportunity: house headphones are very profitable “attach sales.” (Attach sales are the legacy of Noel Lee from Monster Cable, who parted ways with Beats acrimoniously in the early days of the company’s rise.) Apple knew that it could sell millions of headphones through Apple Stores, Apple.com, Nike Stores, Best Buy, Amazon.com, and so many other mainstream retail outlets. 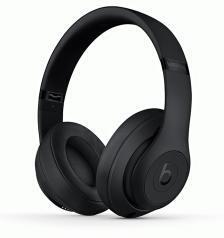 , which retail for $349/pair but generally sell for much less. These are wireless, noise-canceling headphones designed for today’s portable devices (especially Apple devices) that no longer have a headphone jack. Beats is a fashion-first brand; and, while my Studio3 sample was donned in a simple matte black, more colors and options are available than any other company in this space, including Shadow Gray (like my “Space Gray” Macbook Pro), a medium Blue, Porcelain Rose (like my wife’s rose gold Apple Watch), White, and a Jordan-esque Red.

The Studio3 headphones come with Pure ANC responsive noise blocking–meaning that, unlike the Bose QuietComfort 35 Series II headphones at the same price, you don’t have to select a levels of noise cancellation. These Beats headphones will remove the background noise for you with no effort. They also isolate you from exterior sounds through their solid ear cups, which have good adjustability.

The Studio3 headphones boast a category-crushing battery life of 22 hours with Pure ANC on and upwards of 40 hours with ANC turned off. I am not sure what Class 1 Bluetooth is, but it’s likely not the latest Bluetooth 5, which hasn’t made it to many headphones in this space. Bluetooth 5 boasts even better battery life, a range of close to 950 feet, and better audio performance. Apple uses its W1 chip in the Beats Studio3, which I couldn’t find a whole lot of information on. The Studio3 also recharge quickly from most charging sources; I found this to be true when charging them from both a laptop and my Anker 20,000-aMH portable charger. The headphones have a very cool LED “fuel gauge” on the right side that gives you an easy look at how much juice you have left. Realistically, you aren’t going to run out of power for days, but at least you know where you stand.

The Studio3 package includes with a headphone cable (why would you want to use a cable with wireless headphones that have a reported 40-hour battery life?) and a charging cable that doesn’t have a USB-C option (and thus required a $6 adapter like the one I got from Amazon Basics to work with products like my new Macbook Pro. There is a rounded case into which the headphones fold nicely.

The Quick Start Guide is as good as you’d expect from an Apple product. Getting up and running with these headphones was pretty darn simple in my Apple-centric world, but I have no reason to believe that anyone else would have issues. Simply press the button on the right side of the headphones, and they show up in the Bluetooth section of your device’s Settings menu. You might need to hold the button on the headphones slightly longer than you think to make a connection. When you connect them, they make a funky little melody, then here comes the music. Get ready…

Listening Tests
I can report to you that these Beats headphones are not nearly as outrageous as the first, wired ones that I heard back in the day. Thankfully the Studio3 doesn’t have that car-audio-show, booming bass. I dialed in a familiar track from David Byrne’s Rei Momo

album called “Don’t Want to be Part of Your World” (an AIFF files via iTunes on my Macbook Pro). I listened to this entire album on the competing Bose QuietComfort 35 Series II wireless headphones, as I was digging the wonderful layering of the ethnic beats, rich strings, and horns below Byrne’s iconic voice. The Studio3 sounded more “sucked out” with ANC turned on. These headphones didn’t have the depth, layering, or space that I heard through the Bose QC 35, Sennheiser HD1, and especially the B&W PX. The Beats headphones were polite but distant. They just didn’t sound as engaging.

; while I am not the biggest hip-hop fan, these Washington D.C. deejays mix all sorts of genres from classic jazz to modern reggae to island hip-hop in an interesting way. The track “History” (featuring Mr. Lif and Sitali) is more of a soul groove and has a smooth bass line. Through the Studio3, you get a feel for how low the bass energy is, but it’s not as tight as I’ve heard through other headphones in this category. The low end has a more rounded, rolled-off sound, while I prefer something more taut. The production cues that Thievery is famous for adding to their tracks were present, but once againwere just a bit rolled off and dull-sounding (especially with ANC on). I didn’t hear hear with other comparable headphones.

through pretty much all the wireless over-the-ear headphones that I’ve recently tested. I am not the biggest Billy Joel fan, but I’ve come to like this song as a demo track for headphones for a number of reasons. It has a solid rhythmic groove established with cool syncopation en route to the first chorus. By the second chorus, the overdubbed Joel background voices sound lush and layered through the right headphones. Later in the track, we get to a piano-driven outro much like in “Layla” from Derrick and the Dominoes where you can hear the richness of Joel’s piano mixed in with the recorded motorcycle effects as the track ends. The overall listening experience through the Beats headphones was pleasant but not game-changing. Simply put, they just sounded a little too laid-back, lacking the detail that others in their class present for the same money. 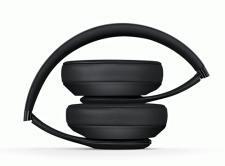 High Points
• All of the players in the $400 wireless headphone space have great battery life, but the Beats Studio3 offers the best by far, especially if you leave the noise cancelation turned off. A 40-hour battery life is insane, and the fact that the headphones charge up quickly is also nice.
• The LED fuel gauge is cool, too.
• Beats are a style-first brand, and they bring more style options than anybody else at this price point. Some I wouldn’t wear on a dare (like the red or blue options), but the black with tan options that I saw on the website are pretty sweet-looking.

Low Points
• The Studio3 headphones feel heavier and tighter on your head than the Bose QuietComfort 35 Series II and the Sennheiser HD1. They also get a little warmer on the ears a few hours into a listening session, whereas the Bose headphones in particular don’t have that problem.
• Sonically, the Studio3 is nowhere near as bad as the early Beats headphones; in fact, they sound very different. These headphones are less garish. The issue I have with their sound is that they are a little “sucked out,” especially with ANC on, and the bass simply isn’t that tight.
• How can Apple sell headphones that don’t have a USB-C charging option included? (USB-C is a smaller connector than traditional USB-A.) I had to use an adapter to connect the Beats Studio3 to my brand new Macbook Pro. So let me get this straight: you can match the color of my laptop, but you can’t include a $0.25 (at cost) cable to charge them without an adapter? Really?

There are many players in this space, and some of them are even sold at the Apple Store. The B&W PX Wireless (reviewed here) has a more engaging sound and a better industrial design, and these headphones are more comfortable for $50 more.

are also $50 more than the Beats Studio3, and they sound more open overall and are much more comfortable.

Audiophiles who love to bash Bose might not believe me, but Bose has the best noise cancellation that I’ve heard in the category. I like being able to adjust the level of the noise cancellation. The ear cups on the QuietComfort 35 (Series II) Wireless Headphones

Conclusion
Beats headphones have come a long way from my first audition of them back at that fateful Consumer Electronics Show, and they’ve done a lot to provide a new stream of profit to Apple, which was already pretty good at making a profit, thank you very much. The wireless Studio3 is a polite but slightly too-laid-back headphone with sub-standard bass. Will that keep people from buying them and/or owning them with pride? Not a chance. They’ll mate well with your sexy new Apple products, and that goes a long way. They are sold enthusiastically in places where people buy headphones. In the end, I am glad that the sonic signature of these next-gen Beats has changed, but it needs to be more open, refined, and tight to compete in the space. Additionally, the comfort level and dissipation of heat could be better. There are simply many other options that beat the Beats.