Bell'O is not a company one would immediately think of when thinking about headphones. However, given what Alex Lezcano encountered during his review of the company's BDH821 headphones, maybe that should change. 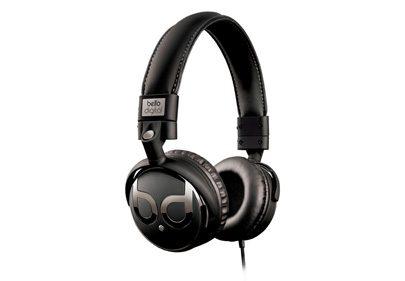 Bell'O International has been around for 25 years and is better known for designing and manufacturing affordable and stylish A/V furniture than for its digital product division. Bell'O Digital handles the company's line of headphones, cables, surge protectors, and more. The company will soon come to market with new over-the-ear headphone options to add to its existing line of in-ear headphones. The BDH821 will sell for $49.99, and the BDH824 will sell for $59.99.

The BDH821 headphones are lightweight in design, using low-mass metal construction. They feature a tangle-free cord covered in a tightly woven fabric to reinforce the cable's strength and durability. I really like the strain relief and fabric used on the cable; 99 percent oxygen-free copper is used, and the cable is terminated with a 3.5mm plug in 24K gold plating. The cord is about five feet in length.

One of my favorite features of this headphone is the one-touch control button with an integrated microphone, which allows you to adjust volume, answer or end your phone call with one click, or play/pause on a portable media player with the push of a button. You can also use it to skip forward or back a track and, if you hold down the button, it activates voice control. I quite enjoyed not having to access my iPad to move to the next track; instead, I just pushed the one-touch button, and away we went. Answering and ending calls on my iPhone was made easy. The one-touch control does have a drawback, as it doesn't play so nice with Android's OS. I used my wife's Android, and one-touch was fine with play and pause but did not let me skip tracks. Bell'O claims the one-touch control can be used with most media players, albeit with limited use, but the headphone is really designed to work with Apple products, such as the iPod, iPhone, and iPad. This is just something to keep in mind when considering the purchase of the BDH821, as you may lose some functionality with the one-touch control. By no means is this a deal killer, because the headphones sound really good.

Bell'O claims that the BDH821 has precision bass, and I have to agree. I was pleasantly surprised with how well these headphones handled music. The bass was tight and not boomy. Overall the sound is quite pleasing, and I did not hear any tinniness or lack of depth. I thoroughly enjoyed listening to music and watching movies on my iPad Mini and MacBook Pro. I had the opportunity to take the headphones on a flight, and they did a great job of keeping the outside sound out. The BDH821 comes with a microfiber travel bag that doubles as a cleaner for your media player or smartphone. The headphone cups rotate inward, making their profile smaller, flatter, and easier to store during travel.

These are good headphones to use when doing webinars, as they tended to enhance the sound and increase the loudness when plugged into my MacBook Pro. On top of that, the all-important presenter/speaker voice came through with clarity and detail. Female vocals came through nicely and accurately, especially while listening to Regina Spektor's Begin to Hope (Sire) and Sarah McLachlan's Mirrorball (Arista). The soundstage was very open, and clarity, spaciousness, and depth were good.

The fit of the ear pad and cup was snug and tight, perfect for my ears, making these headphones suitable to be worn during exercise. I admit that I do not use headphones when working out, but if you do, these headphones are snug enough that they won't come off while running. The headband is padded and seems like it is made from a pretty durable material.

Read about the high points and low points of the Bell'O BDH821 on Page 2. High Points
• The BDH821 headphones are quite comfortable, which allows for long listening sessions.
•
The BDH821 is well-made. I love the cable's tangle-free nature, and the
headphones are not as garish-looking as other recent headphone
offerings.
• The BDH821 sounds great, and the one-touch control with built-in microphone really makes these quite versatile.

Low Points
• Although the BDH821 is nice to look at, it does have a plastic feel to it.
•
The one-touch control was unable to track-skip forward or backward on
an Android phone. The one-touch control is definitely designed with
Apple's iOS in mind. It would be nice if Bell'O made it more
user-friendly with the Android OS.

Comparison and Competition
Compare
the Bell'O BDH821 over-the-ear headphones with Audio-Technica's ATH-M30
at around $60 or the ATH-WS55 at $80. The
Grado SR80i headphones are double the cost at $100.
Learn more about headphones by visiting our Headphones section.

Conclusion
What
a treat to review such a nice product from a company that doesn't first
come to mind when you think of headphones. Bell'O really has hit the
mark with its first over-the-ear headphones, and I look forward to
checking out the yet-to-be-released BDH824. If you are in the market for
a pair of over-the-ear headphones and don't care about or need name
recognition, I would suggest you give the Bell'O BDH821 a serious
listen.

You'll automatically be entered in the HTR Sweepstakes, and get the hottest audio deals directly in your inbox.
Author
Alex Lezcano
HomeTheaterReview Product Rating
Value:
Performance:
Overall Rating:
When you buy through links on our site, we may earn an affiliate commission. Your support is greatly appreciated!
This is the static ad content. This is just a placeholder for now to get things styled.
Visit Website