BenQ has decided to bring the company's video technology to the gaming world with the RL2450HT LED monitor, which will make its debut in the middle of a StarCraft II tournament. 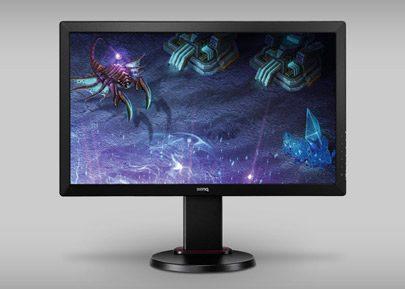 BenQ recently announced that it is the official gaming monitor sponsor for Lone Star Clash: Gauntlet of Champions, the Texas e-Sports Association (TeSPA) tournament that will feature an unprecedented fusion of professional and collegiate StarCraft II action. The tournament's official gaming monitor, the BenQ RL2450HT, will make its U.S. debut at the event.

Presented by TeSPA in conjunction with Quantic Gaming and Cyber Sports Network, the March 17-18 event at the University of Texas at Austin offers 16 of the world's top pro StarCraft II players a staggering $10,000 prize pool and the collegiate bracket a $1,500 prize pool. Both pro and collegiate gamers will battle it out on the professional-grade BenQ RL Series monitor designed for gamers by gamers.

The BenQ RL2450HT was engineered exclusively for gaming with a 60Hz frame rate refresh rate for smooth movement, an LED light engine for great color and low power consumption, and a 2ms G2G response time with 12 million to 1 contrast ratio.

The RL Series RTS Mode maximizes StarCraft II visibility and optimizes color, while its Black eQualizer enables total visibility by allowing gamers to adjust the screen brightness without over-exposing white levels, in turn revealing critical combat details with improved visibility in darkened areas. The RL Series Display Mode allows gamers to interchange between monitor screen sizes, while the Smart Scaling feature gives them the freedom to manually scale the screen to any custom size from 17 to 24 inches, depending on their preferences. In addition, the unit's adjustable height stand allows for optimal screen positioning.

Lone Star Clash: Gauntlet of Champions will take place in the Student Activities Center on the University of Texas campus in Austin, Texas. During the tournament, BenQ will take $20 off the regular price of the RL2450HT monitor for fans and participants.