André Hanekom hand-makes the Blue Angel cartridge. It is and always will be, a rare beast He uses a hollow aluminum cantilever with a gyger fine-line stylus tip. The cartridge's sonic performance is dark and romantic with a touch of extra sweetness 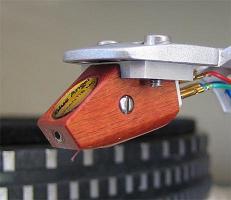 Conditioning dictates that if someone claims to have made something from scratch, odds are it's a speaker. With all due respect to speaker builders of repute, there's nothing easier than shoving drivers in a box and calling one's self 'a manufacturer.' But I genuinely cannot remember the last time I was told by someone that he had made an all-new phono cartridge. And from South Africa, to boot.

Let's qualify this: André Hanekom, in addition to being a music lover and audiophile, has a background that lends itself to fashioning his own cartridge. For many years the South African distributor of a handful of watch brands, with mechanical skills of his own, André was not put off by micro-mechanics. And herein lies a tale, as much inspirational as cautionary, for all you would-be Joe Grados.

André describes the origins of the Blue Angel Mantis MC with an experience familiar to many entrepreneurs; it's not unlike Ferrucio Lamborghini deciding to make his own car when faced with an unreliable Ferrari. 'Exactly four years ago, I bought a Supex SD900 Super II, and found that it was damaged upon arriving at home. Three months later, I managed to repair it myself, and this caused what may be termed an obsession to make my own moving-coil.

'To try and copy a Supex or a Koetsu cartridge would be easy, but this would be immoral and a severe insult to the late Sugano-san. So, every single part of this product has been made by me in my workshop at home, except for the packaging, which comes from my friend, Rodney Gold, and the stylus/cantilever assemblies, which I import from Fritz Gyger in Switzerland.

'But before I could even think of making a cartridge, I had to acquire a metal-turning lathe and a milling machine, and teach myself how to use them. After this came the purchase of literally hundreds of other specialised tools.' André explained that many tools required for cartridge making cannot be bought 'off the shelf,' so he had to make them himself, as he went along - talk about a sharp learning curve. But, he admitted, 'I became fed-up with trying to get an outside firm to anodise things for me and here started another "adventure". A special anodising installation for small components had to be built and I had to become proficient enough to do this job myself, as well.'

This preamble goes some way toward explaining why the Blue Angel Mantis will always be a rare beast: André insists on making each one and doesn't anticipate being able to make more than five per week - probably less. 'It is certain that the manufacture of ultra-fine components is very time-consuming, so recently I had talks with an outside firm with CNC and mould-making facilities. The problem, however, is that most local firms with specialised facilities instantly lose interest when they see the size of a cartridge body and learn the limited production numbers.

'Somehow, I will probably come to some arrangement with a local firm as, basically, I would prefer only to wind the armatures, assemble the components and be involved with measurements.' For the time being, though, every Blue Angel MC is hand-made by the designer.

THE TECHNOLOGY
André admits that, 'There is nothing radically new in this design.' Instead, he looked toward the finer points of cartridge design. He uses a 'special grade of aluminium' for the bodies, which are milled in two parts, due to the difficulty of fine-finishing a single piece chassis. He considered casting the body as one piece, but was informed by firms with anodising expertise that aluminium castings cannot be anodised.

He designed the body to be as light and rigid as possible, with straight sides and a narrow 'nose' to make set-up as easy as possible. I was reminded of Ortofon's Concorde, and its sheer simplicity for lining up the body within the gridlines of a set-up device. The Mantis also features a large mounting plate to ensure solid coupling to the headshell, with standard half-inch spacing to accept special stainless-steel Allen screws. It was pointed out that these small screws 'could not be bought ready to use,' so almost all of them are modified by to André 'to fit the purpose.'

Inside is a plastic carrier for the neodymium magnet and 'very small' cross-shaped armature structure, together with the tensioning mechanism. The carrier is a complicated, one-piece cylindrical milling, made from a 'special, resilient, low-moisture-absorbent engineering plastic.' The armature and coils are close-coupled to the drilled and recessed magnet, thus eliminating separate poles.

Compliance is provided by a fine and strong nine-strand material while damping is applied with a butyl derivative, developed according to André's specification by a local firm. The coils are copper as André prefers this to other materials. Here's where the hand-made nature of the Mantis allows a bit of bespoke 'tailoring'. André said that he has had 'endless trouble' finding superfine copper wire, so he's secretive about what he uses. But he did let slip that the review sample used something close to my heart: wire from a rare Longines electric clock! I suspect that clients could ask for silver, platinum, gold or whatever they prefer. Lastly, to avoid unwanted frequency aberrations, all of the internal components are 'push, pull and cross-tensioned inside the body, thus making a very rigid assembly.'

What strikes you first about the Mantis is the sheer professionalism of the product, from packaging to finish. It comes in a smart wooden box with the name and logo burned into the lid. Inside the cover is a metal plate listing the specification, while the lower section holds a fitted plastic assembly with the cartridge bolted in place. Also supplied is a set of headshell wires, spare screws, an Allen key and even a magnifier with built-in tweezers.

Upon removal of the Mantis, you are first shocked by the lack of a stylus guard. So be careful when handling it. And it's a little jewel, the Bugatti-blue anodizing absolutely perfect and looking elegant once the cartridge is mounted in the discreet comfort of an SME Series V arm. Set-up was ludicrously fast, and it was up and running - at 2g downforce - in minutes. Where the fun came it was with the loading.

Although the output was high enough to drive the 47k ohm phono stage of the McIntosh C2200, the volume had to be cranked up and the dynamics were suffering. I preferred it with the Audio Research PH5 phono stage, but which setting was better has yet to be resolved. Thank goodness, the PH5 has a remote that allows you to change the load setting from the listening seat, because some recordings favoured 100 ohms, others were best with 200. So there's room for experimentation; I'd love to try this with a Manley Steelhead. Also used were the McIntosh MC2102 power amp and Wilson WATT Puppy 7.

Forget the newness of the brand, the untried nature of the beast. This may be only the fourth cartridge made so far, but nothing suggests this. Its build quality, fit and finish are the equal of any established cartridge, and the Gyger fine-line tip on a hollow aluminium cantilever boast a pedigree that encourages allowing it to make contact with your precious vinyl. Assuming that the review sample was run in, it worked like a thoroughbred, with some minor reservations.

Tracking ability was fine, output no problem. Stereo width? Side to side in Cinerama glory. Bass is deep and very well-controlled, handling the thwacks of Dave Clark's drums in the rare stereo 'Glad All Over' and (in mono) of the percussion in both Morton Gould marches and Mickey Katz's 'Roisele Fun Texas' with a sense of mass that came pretty damned close to Decca-like in its authority. Some could argue that a shade more weight would be desirable. At the other extreme, the sound was sweet and clean, with only the slightest hint of edginess.

If there's an area to tweak, it's the mid-band, where the sound is a shade congested and ever-so-slightly veiled. I was fortunate enough to have a parade of experienced guests who listened to the Mantis, one of whom called for an Amanda McBroom LP of 25 years ago, which he knew intimately. His verdict? A bit dark, but overall impressive.

Blue Angel is the new kid on the block, the only access is through mail, phone or FAX, and it's not something you'll get to hear first. Unless, that is, you vacation in South Africa. André hasn't even priced it yet, but I expect it to sell for something around 2000. A lot of money, true, but it is pretty much the hi-fi equivalent of a Bristol: you won't see one in every car park. Or, in this case, hear one in any stores. But, should some plucky distributors investigate it further, it could have a solid future.