The Mo-Fi headphones from Blue Microphones are visually distinctive, rugged, and very comfortable, but how do they perform? Steven Stone puts these over-the-ear headphones to the test. 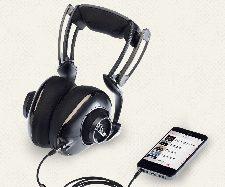 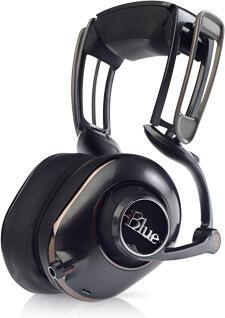 Blue Microphones‘ primary products are, as you may have surmised, microphones. However, since audio engineers need to hear what they are recording, it’s really not that much of a stretch for Blue to expand from microphones into headphones. Since Blue’s past products have been aimed primarily at audio engineers and musicians, you won’t be surprised to learn that its new Mo-Fi headphones are also designed with an eye toward that market. With the addition of its built-in power amplifier, though, the Mo-Fi can produce thundering bass from even the wimpiest smartphone. Although they have plenty of competition at their $349 street price, Blue’s Mo-Fi headphones have a unique set of attributes that should appeal to anyone who is looking for a pair of rugged, multi-purpose closed-cup headphones.

It would be impossible for anyone to mistake Blue Mo-Fi headphones for anything else. They have a unique look that is part steampunk, part sci-fi, and part antique industrial chic. The Mo-Fi headphones have a sealed-cup, over-ear design that does a good job of isolating you from the outer world. Hand claps turned into dull thuds when the Mo-Fi headphones were on my head. The Mo-Fi headband is made of metal and employs an adjustable spring tension system to change the amount of side pressure on your head. The Mo-Fi also uses a unique height adjustment scheme where you push down on the headband to position the earpads exactly around your ears.

The Mo-Fi headphones have some of the thickest, softest earpads I’ve seen on any headphone. They are soft enough that, even if you wear glasses, they will form a tight seal around your ears. Besides the thick earpads, the Mo-Fi also has a thick pad at the top of the headband, which takes all the top pressure and puts it into a well-padded, three-inch by one-inch space. While I found the Mo-Fi cushion arrangement to be very comfortable, if you are devoid of hair up top and it’s a warm day, you might find the warm leatherette top cushion less to your liking. On the top of the Mo-Fi’s headband is a circular knob that adjusts side-force tension. I tried it in various settings and found very little difference in the tension from one extreme to the other. Either my review unit’s tension changer was broken, or it just doesn’t do much. I have a 7.13-inch-sized head, and I found the side tension of the review sample to be just right; but, if you have a large head, you could find the side pressure to be excessive.

Inside, the Mo-Fi uses a 50mm-diameter fiber-reinforced dynamic driver with a 42-ohm impedance and a published frequency response of 15 Hz to 20 kHz. Blue doesn’t list a sensitivity specification, but I found the Mo-Fis to be somewhat less sensitive than the Oppo PM-1 headphones but much more sensitive than the HiFiMan HE-560 headphones. The built-in amplifier boasts an output power rating of 240 mW with greater than 105dB signal to noise and 0.004 percent total harmonic distortion. The built-in battery that powers Mo-Fi’s amplifier section has a capacity of 1020 mAh and can supply a maximum of 12 hours of playtime before needing a recharge.

The Mo-Fi headphones come with two cables: a three-meter and a 1.2-meter. The 1.2-meter cable has built-in iPhone/iPad volume and mute controls. The cables attach to the Mo-Fi via a long barrel connection that connects firmly yet will quickly disconnect if pulled. The Mo-Fi also comes with a soft case with a cable storage pocket, a one-meter USB charging cable, an AC charger, a 3.4mm-to-0.25-inch adapter, a two-prong airplane connector, a user manual, and registration materials.

Ergonomic Impressions
If you’re the sort of person who likes to dance to the music and who regularly finds themselves with a shaken-off pair of headphones lying on the ground or slumped around your ears, the Blue Mo-Fi could well be your ideal headphones. Of all the headphones I’ve reviewed over the years, the Mo-Fi is certainly among the most tenacious, yet comfortable, I’ve experienced. Especially for recording musicians who can’t deal with a pair of cans that slip from the right position (they always slip just before a solo), the Mo-Fi could be just what a sight-reader ordered. I took the review pair of Mo-Fi headphones to a recording session, and everyone who tried them didn’t really want to pass them along to the next guy because they were so comfortable and did such a good job of staying in place.

While on the subject of recording studios, here’s a dirty little secret I’ll share with you: eventually any headphone used in a recording studio will be thrown. I’ve done it, and I’ve seen lots of other musicians do it. The Mo-Fi will survive any toss, short of one coming from a Cy Young winner five feet from a brick wall. The only downside of Mo-Fi’s heavy-duty build is that it weighs just about a pound and doesn’t fold up into a compact portable package. If you plan to travel with the Mo-Fi, you may need to move up to a larger knapsack or briefcase.

Another feature that everyone will appreciate both in and out of the studio is the Mo-Fi’s removable cable system. The headphone end of the attachment system employs a long metal ferule that fits snugly into the left-hand Mo-Fi cup. It’s firmly attached, but anything more than a gentle pull will disengage it from the headphones. That’s a good thing. Also the inclusion of two different-length cables is the sort of feature that shows that the Mo-Fi designers were doing their homework.

Sonic Impressions
The Mo-Fi can perform like three different headphones. In passive mode, its performance is good enough to put the Mo-Fi on par with some of the finest headphones. The “On” mode, meanwhile, is a few steps down in sonic quality, due to the noise and additive colorations generated by the built-in amplifier. The final mode, which Blue calls “On+,” adds additional (and, some might say, bloated) bass energy to the Mo-Fi’s active sonic signature.

If the last paragraph gave you the impression that I was not enthralled with the Mo-Fi’s active modes, you would be right. Although the specifications indicate that the built-in amplifier has better than 105-dB signal to noise, the addition of the amplifier replaces the previously silent noise-floor of the passive Mo-Fi with a soft but perceptible hum accompanied by a bit of white noise. In passive mode, the Mo-Fi produces a harmonic character that favors bass but still has enough high-frequency sparkle to avoid sounding dark or closed in. Given their sealed-enclosure design, the Mo-Fi headphones have a decent-sized soundstage that is very similar in scope to that of the MrSpeakers Alpha Dogs, but not quite as extended as the new Alpha Primes. Imaging through the Mo-Fi is also good, but not as precise as that of the Oppo PM-1 or Alpha Dog Primes. In terms of low-level resolution, I would say the Mo-Fi has medium resolution, with similar detail resolution to the Oppo PM-1 headphones.

Even when the Mo-Fi was in passive mode, an iPhone 5 had more than adequate power to drive the headphones way past my own personal high-volume comfort zone. While I’m sure there are some smartphones with wimpier amplifier sections than Apple’s latest offerings, I suspect that, with most smartphones and most music, you won’t feel the need to activate the Mo-Fi’s active modes for added volume. If you do employ the “On” or “On+” setting, make sure to turn down your volume level before activating the switch because the active modes generate a substantially louder output level than the passive mode. And if you engage the active mode in a quiet environment, you will hear the added low-level noise, as well as some degree of image smear and glare during peaks.

To my ears, the “On+” enhanced bass settings were slightly less than a sonic bromide. The well-controlled yet slightly warmish bass of the passive mode was turned into boomy, poorly damped mess when “On+” was activated. Although Blue boasts about using an all-analog amplifier, which at least on paper has good specifications, for anyone with a source that has even a half-decent built-in amplifier, the passive mode will most likely be the preferred setting. 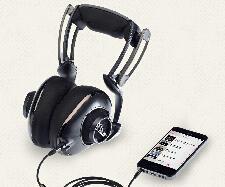 For $350 you can buy some very good headphones, including offerings from most of the major headphone manufacturers. Beyer Dynamic makes several excellent headphones in this price range, including the DT990, DT880, and DT1350. Although the Mo-Fi will be easier to drive with a smartphone amplifier than most Beyer offerings (except the 32-ohm versions), the Beyers offer a slightly higher-resolution sonic view. Sennheiser’s Momentum is a closed-back, high-sensitivity design that is both comfortable and high resolution. Sony’s Mdr1 is also a sealed-enclosure design that is very highly rated. Audio-Technica’s ATH-A500x is another closed-cup design that competes with the Mo-Fi and, for those who demand a lightweight pair of headphones, might be a better option. The list could continue for several more paragraphs; in the $300 to $350 range, you have a plethora of excellent headphone purchasing options.

Conclusion
The ideal customer for the Blue Mo-Fi would be someone who has proven to be hard on headphones and must have a pair with superior isolation. The Mo-Fi’s all-metal headband will survive far longer in hostile environments (like recording studios) than a pair of Stax headphones, for instance. The Mo-Fi should also appeal to anyone who needs a pair of headphones that will remain in place no matter how much head-shaking or body English they employ while listening to (or making) music.

Although I was less than enthralled by the sonics of the Mo-Fi built-in amplifier, it does offer an option if you need more volume than your source device can deliver. Still, I would recommend listening to the Mo-Fi in both passive and active modes (if you need them) before deciding whether or not the Mo-Fi will be your happily ever-after headphone.