Bluesound has released an upgrade to the BluOS operating system upon which its hi-res-capable multi-room music system is built. The update includes changes to the mobile controller apps for iOS and Android and adds support for Apple Watch. The new... 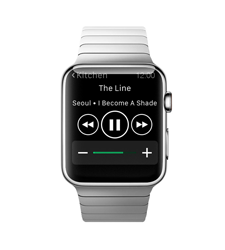 Bluesound has released an upgrade to the BluOS operating system upon which its hi-res-capable multi-room music system is built. The update includes changes to the mobile controller apps for iOS and Android and adds support for Apple Watch. The new BluOS Controller, which is also available for Mac OS X and Windows computers, changes the way you access music, create playlists, and set up new players, and it adds access to the Radio Paradise Internet radio service.

Developed for Bluesound and sister company NAD Electronics, the redesigned BluOS Controller app is built to be a universal "one-app" solution for all BluOS-enabled wireless hi-res music systems. The updated app revamps the music experience and now features:

• SmartPlay Playlist Creation: A faster and easier way to queue up music, enabling users to instantly add and listen to tracks without limitations, while the rest of the album or playlist is auto-filled into the queue.

• Apple Watch: BluOS Controller is now available for Apple Watch. Instantly check what's playing, select a Player, or change the track, all from your wrist.

• Controller Widget: Access Player presets and control music playback at a glance with a single swipe, without ever launching the app.

"At Bluesound, we're committed to delivering the most intuitive, interactive and immersive music experience for BluOS users," said John Banks, Bluesound's Chief Brand Officer. "This is a major enhancement, and we're confident that our new design and feature updates will connect BluOS users more deeply with their music than ever before."

Combining advanced digital technologies and striking design with radical new thinking, Bluesound products have created an exciting audio revolution that appeals to a wide demographic audience. Bluesound is a smart music system of audiophile-grade wireless speakers and digital players that allows you to stream music from a library stored on your home network and many online streaming services to any room in your home with the intuitive control of a full-featured smartphone, tablet and desktop app.

BluOS users are asked to upgrade to BluOS firmware version 2.0.0 or higher starting now in order to download the new apps. Download BluOS Apps and firmware updates at bluesound.com/downloads.

Bluesound Teams Up with iHeartRadio