Top-loading Bow Technologies Wizard looks like a natural metal sculpture than melds aesthetic with functional. Although it can be used as a transport, a good part of the Wizard's sonic allure is a result of it's fine D/A and carefully designed and built analog output circuit. 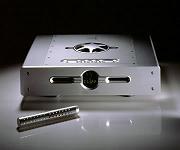 Whether it's caution or obstinacy, numerous high-end brands are studiously avoiding - if not necessarily ignoring - DVD. Some argue that it's the dearth of half-way decent OEM transports, but that never stopped manufacturers of costly CD players using certain Dutch-made CD spinners with the reliability of perforated condoms. Others argue convincingly that they're waiting until the dust settles in the forthcoming DVD-Audio vs SACD vs 96/24 format war. Then there's the fact that CD is the 'last format to eschew data reduction or data compression', that there are the tens of thousands of readily-available CD titles, that CD has huge owner base - whatever the justification, Bow has joined Linn and others in seeing out this century with a CD player. But not just any CD player.

Although the Wizard - designed to match the Wazoo integrated amplifier - costs a relative pittance compared to the top machines offered by Krell, Linn, Wadia, Mark Levinson and even its stablemate, the ZZ-Eight, at no point does its physical presence suggest anything less than a five-figure purchase. This is a true luxury device oozing class in both its styling and its fit and finish. Given that its designer, former architect Bo Christensen,* has a spotless track record which commenced with the radical Primare 'cubes' of the early 1980s, it's no accident that the Wizard calls to mind other 'natural metal' sculpture which marries the aesthetic and the functional.

Blessedly, two of the brands it made me think of do not manufacture their own CD players, makers of preamps and power amps that share enough spiritual content with the Wizard to suggest long-lost-relative status: Cello and Nagra. This tells you immediately that the Wizard is a delight to behold

Although my more salacious side can't help likening the Wand to a certain battery-operated cylindrical device beloved of women with a penchant for DIY, it is possible to savour Bow's remote for its sheer elegance, its jewel-like construction and its too-clever-for-mere-mortals layout. Machined from a billet of aluminium, the Wand sports 14 buttons controlling every command, as well as operating the Wazoo's volume. Press one of the buttons and a tiny green LED flashes, telling you that you've put the Wand into numerical mode for direct-track access. So covetable is the Wand that the importer decided to make it part of the Wizard package rather than offer it as an option. I can assure you that no customer for the Wizard would be able to resist the Wand after a mere moment's use.

In addition to the Wand are buttons running across the top surface to control the main transport functions; the Wand deals with the basics plus the programming modes. Because the Wizard is a top-loader, Bo was able to grace its front panel with a funky, finned display which isn't hindered by a CD tray aperture. The detail makes it look like some steam-punk prop, calling to mind the designs seen in 1930s SF serials like

Although top-loading isn't my favourite layout, I must state that Bow addressed the problem of dust entering through the self-centring spoked disc stabilizer by supplying a padded disc to leave in place when the player is not in use. Its underside is covered with leather to protect the exposed laser lens. Ever concerned with attention to detail, the 'open well construction' is also said to eliminate static build-up. At the 3 and 9 o'clock positions are deep grooves which allow the user to remove a CD with ease. Despite the minor inconvenience of placing the lens protector in place after use, I have to admit that the thing looks so damned clean and cool that I could easily learn to live with a player which doesn't open at the front.

Cleanliness rules at the back, too, the player arriving as standard with single-ended phono and balanced XLR analogue outputs and three digital outputs. Bow fits only 75 Ohm BNC, 75 Ohm phono and 110 Ohm balanced AES/EBU; quite clearly, the company remains wholly opposed to TOSlink and AT&T optical. Also fitted at the back are the primary on/off rocker, an IEC mains input and a space for an upgrade I'll get to shortly. Measuring 434x110x360mm and weighing a chunky 11kg, the Wizard is no shrinking violet and it demands pride of place. Then again, so do all top-loaders.

Bow designed the Wizard to use only precision-engineered mechanical parts and components selected for 'their electrical performance, long-term thermal stability and audiophile-grade sound quality'. The company also boasts, or should that be 'Bow-sts', that its assembly procedures are 'based on techniques used in the manufacture of the most critical medical and military equipment.' The heart of the Wizard is a 'heavily modified' (it has to be) die-cast Philips CDM12 Pro CD transport 'mechanism stripped of all sonically degrading capacitors'. Bow also employed the Inter IC-Sound (I2S) transfer bus, believed to isolate audio data, word clock and bit clock, to eliminate a major source of jitter. And, again in keeping with an isolationist policy, the transport and the digital, analogue, display and microprocessor circuitry are fed by seven separate, regulated power supplies. Add to it the kind of bank-vault construction seen in the likes of the Linn CD-12 and the Mark Levinson transports, and you have a device which evokes stability and solidity throughout.

Despite its plethora of outputs, the Wizard should be judged
primarily as a single-chassis CD player. Whether or not Bow Technologies
plans to issue a stand-alone DAC I'm not sure, but, in stressing the
Wizard's worth as a long-term investment, Bow has endowed the Wizard
with 'modular mainframe construction' to make it amenable to upgrades
and on-going design improvements. The Wizard's 'continuous calibration
Bitstream' D/A converter can be upgraded to 24-bit/96kHz oversampling,
the upgrade including installation of a digital input (the
aforementioned space cited above) to accept the output from a DVD player
or other source. And, should Bow ever find a DVD transport it finds
worthy of using, I wouldn't be surprised to find it housed in this
chassis.

Fed into the Nu-Vista pre-amp and Nu-Vista 300 power amp driving
Sonus Faber Guarneris, the Wizard was compared to the almost
identically-priced Krell KAV300cd, the Musical Fidelity X-RAY and the
sadly discontinued Marantz CD12/DA12 with full Ken Ishiwata benediction.
Wiring throughout was Kimber, with a brief bout of MIT interconnect.
Mains wiring, too, was Kimber or Transparent, the Bow not finding favour
with the all-silver Siltech AC wire.

Run-in and warm-up are crucial to the Bow, so these were addressed
before any listening commenced. And I'm glad I managed to resist
temptation because the Wizard is as finely-tuned as any CD player I've
tried. It demands top-class ancillaries, clean mains, rigid siting and
carefully chosen wiring, or it will misbehave, its naughtiness coming in
the form of slight sibilance.

When I mentioned this to the importer, the phone lines between High
Wycombe and Ringe started smokin'. So convinced were the Danes that I
was hearing something not there that they sent a second machine over
post-haste to determine whether or not I received a dud. I did not. And,
to convince that I was not imagining these occasional traces
of sibilance, I underwent a hearing test during the last week that I had
possession of the Wizard. OK, so the NHS uses embarrassingly crappy
headphones and the noise floor made me think of a Dolby tape played back
without Dolby switched on, but I was told that my hearing is 'normal'
for a 47-year-old. In other words, sensitivity to sibilance is probably
the last thing which should trouble me. But hear it I did.

What baffled me was that I heard it in comparison to the KAV300cd,
Krell products not being noted for upper frequency shyness. It was thus
that I learned how critical is the set-up for this player. Eventually, I
settled on Kimber's best interconnects, a heavily-weighted rack and a
diet of anything modern C&W recordings. So free is the Bow
with detail, so crystal-clear the delivery and so precisely cut the
transients that the Wizard will let you know exactly what CDs you own
that were recorded, mastered or pressed without due care.

Once that matter was out of the way, I was able to revel in
everything else, that slight but discernible sibilance the only area of
concern. But let me reassure the mildly paranoid that my pointing out
the Wizard's antagonism for lesser ancillaries is like berating a Lotus
Elise because it lets you feel every bump in the road. This is not
criticism; it is recognition of a specific state of affairs which
demands a bit of extra care in system-matching, nothing more and nothing
less. And when you hear how elegantly the Wizard performs when set up
'just so', you'll regard Bow's concern for my remarks in the way you'd
treat Mick Jagger for worrying about getting shot of both a wife and a
mistress for a mere 15 million.

This is certainly a player for those who cherish vocals, Mesdames
Wynette, Parton, Twain and the like aside. Although the Wizard leans
toward the clean and cool - more Krell than Musical Fidelity or Marantz -
it exhibits enough air and atmosphere to cosset acoustic instruments. I
have no idea what Bow's design team uses for reference material, but
someone in Denmark certainly must adore singers like Lou Rawls, Barry
White and others whose voices possess richness, texture and depth. The
Wizard presents them with just the right amount of body and scale to
convince you that you're hearing a human voice, not a remastered
facsimile - neither too large, too crisp nor too forward. And if you
can't help analysing as you listen, the Bow also lets you know when the
recording was too closely miked.

Exceptional detail retrieval provides the little clues, like throat
and teeth sounds. When it comes to musical instruments, this manifests
itself by revealing the mechanical aspects of the instruments; dig out
those old Wilson Audio ragtime recordings followed by a solo,
mint-condition baby grand if you need proof that a system can tell you
what a piano's hammers contribute to the sound as they strike. Fingers
on frets, mouth on reed - this player hides nothing. Better still, it's
a, uh, wizard with spatial concerns, especially with live recordings in
which you can confirm the placement of the performers. Check out the
recent Ace CD of the Weavers' gospel material, or anything by the
Persuasions for a taste. And to demonstrate the Wizard's grandeur, you
can do no better than the power of the soundtrack to . From a capella to orchestra, the Wiz rises to the occasion.

Now the most important spec: it costs 3495 including the Wand. On
pride-of-ownership grounds alone, the Wizard is worth every penny. But
the sonics, once you've addressed that minor sizzle, are rewarding
enough to justify comparison with far costlier hardware. It's a real
thoroughbred. Just like a highly-strung horse or a car with attitude.
And, Bo, that's a thing, not a demerit.